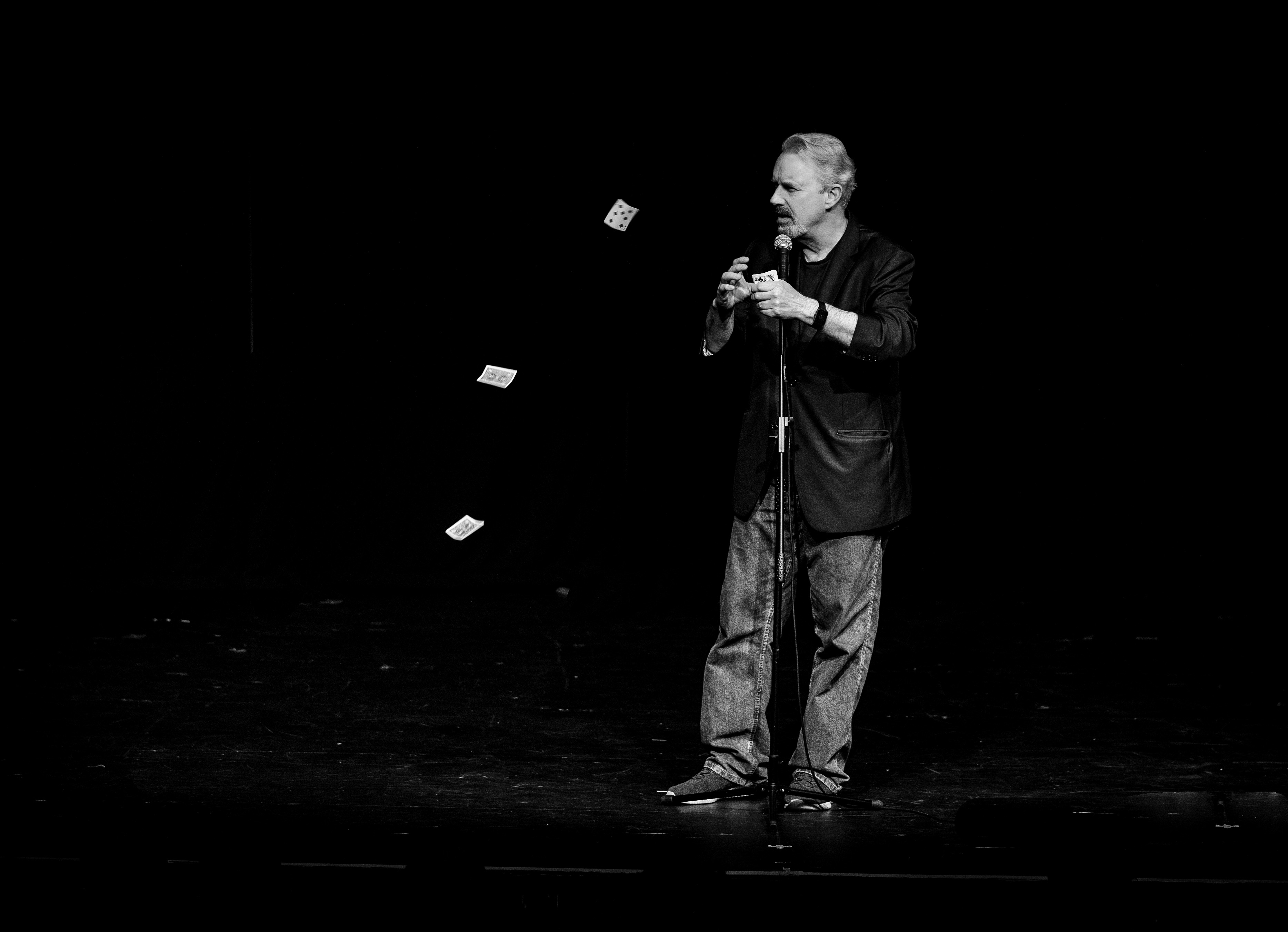 I’ve been a stand-up comedian for over twenty four years and I am also a photographer; a clowntographer! Usually I shoot with the FUJIFILM X-Pro2, but I recently took the medium format GFX 50S to the Edinburgh Fringe festival. This is not going to be a technical blog with numbers and facts but more of a touchy, feely one about how I got on. END_OF_DOCUMENT_TOKEN_TO_BE_REPLACED

Who am I? Good question.

But mainly I’m a stand-up comedian – www.stevebest.com. I have been one for many years. I have plied my trade all around the world, having toured with many a famous person.

I have also co-founded Abnormally Funny People, which is a group of gifted stand-up comedians strutting their funny stuff. All but one of them is disabled (that’s me!) I’m the ‘token’ able-bodied comedian  www.abnormallyfunnypeople.com

I also take pictures. Mainly of comedians. I have published a book with 436 pictures of comedians. One comedian on each page, with a joke of theirs, and a few weird and wonderful facts about themselves.

Double page spread
I’m very proud of this book. Nothing like it has been done before – www.comedysnapshot.com.

So, what now? And why is Fuji posting this blog? Let me explain a bit more…

The first book wasn’t really intentional. When I set out I took a few pictures with a camera phone just for posterity. Here’s one of Ross Noble. The fuzziness kind of suits him.

I had a Ricoh Caplio GX100 camera with me. It was a great little point and shoot. Of course it had its limitations. It was pretty slow to start up. And it wasn’t great in low light situations. Most of the pictures in the first book were taken with the Ricoh.

So, I had a collection of comedians, which every now and then I plonked up on Facebook. Make it into a book, many people said. One such person who said this was my next door neighbour (ish – 3 doors down), Javier Garcia, who is a wonderful sports photographer, and owner of www.backpageimages.com

So I did it. Just like that. Well not quite. Jeez, it was bloody hard, and rather costly.

The person who really, really, really, really helped me… really, was Drew De Soto. Drew used to be a comedian. He’s still pretty damn funny. He runs a graphic design company,www.navig8.co.uk and in fact was running it while being a comedian. We met again when I was on my quest for the answers to my questions from the comedians. I tracked Drew down. He then asked me the question,
‘Where are you going to design it?’
‘Err, on line?’ I answered back with a kind of question.
‘Come into my office,’ he said.
And the rest is history, so historians would say.

You’re still asking where does Fuji come into this.

While being taught InDesign (actually learnt about 4% of what it can do) and Photoshop (5%) and how to kern (the process of adjusting the spacing between characters in a proportional font, usually to achieve a visually pleasing result), Drew would often pop out to take a picture with, wait for it, the Fuji X100. He loved it. All apart from the slight focusing problem, rectified somewhat with new firmware, and even more rectified with the X100s, which I will one day get him. Although I hear the X100T is out…

So the book came out, and I had become hooked on taking photos. I was still gigging, still bumping into comedians that I somehow hadn’t snapped for the first book. I’ll do another book then, I thought. I wanted to up my game. Park Cameras was down the road to Drew’s offices, so most lunchtimes I’d wander in and touch and stare. Mainly Fuji. But not exclusively. In fact I looked at Ricoh too, as I was pretty familiar with their kit. I took the bull by the horns and phoned up Ricoh to see if they would give me a camera as I had used their GX100 for the first book. Unfortunately the Fuji X100s was in my head as I started talking to the PR person at Ricoh.

‘I love your cameras’ I said, and began to explain my project of the Comedy Snapshot sequel
‘It’s not something we usually do, but what camera would you be looking at?’ She asked.
‘The X100s.’
There was a small pause.
‘That’s not a Ricoh,’ she replied with a little laugh in her voice
There was another pause
‘I’ve mucked this up, haven’t I?’ I said
‘Yes, I think you have.’

I didn’t phone Fuji for fear of doing the same thing in reverse. Instead I spent two weeks of lunches in Park Cameras.

Fuji were doing an offer for the X-Pro1 – the body and a lens, and you’d get a free lens in the post. I went for it, I got the X-Pro1 and the XF18mm F2, and true to their word a few weeks later the XF35mm 1.4 was handed to me by the postman. What a beast! The camera, not the postman…

So off I went taking pictures for the next book with my X-Pro1. And of course a few other shots for the hell of it. Here’s a few. The ‘sheer hell of it shot’ made it to the Sunday Observer.

The X-Pro1 is a great camera. And both lenses are superb. It’s wonderful in low light, even with smacking the ISO up high. It’s not too bulky, it’s quiet, and damn sexy looking… I updated the firmware. But for some reason I kept going back to Park Cameras to touch the other Fuji cameras. I needed another body. I wanted another body.

I knew a comedian who knew a man at Fuji.

He showed my book to him with the tag that I was doing another, all shot on Fuji. The man at Fuji liked my first book, and loved some of my recent pictures taken on the X-Pro1. Would they be interested in loaning me the X-T1 and the 56mm 1.2 lens?

I waited a few weeks.

The man from Fuji, he say ‘YES’. The deal was done, no meet up, no handshake, no signatures, just coolness and a willingness to take a shot. This is not to say to say that Fuji are lending out cameras willy nilly. I think I was just a little lucky, the right man, the right place, the right face. Two weeks later a brand spanking new X-T1 and 56mm F1.2 lens was delivered by the same postman that had delivered the X-Pro1.

It really is an amazing camera and lens.

The next blog will be a bit more technical on how and where I take the pictures. But for now here’s some pics taken on the X-T1 with the 56mm lens.

Filed under Be Inspired Portrait