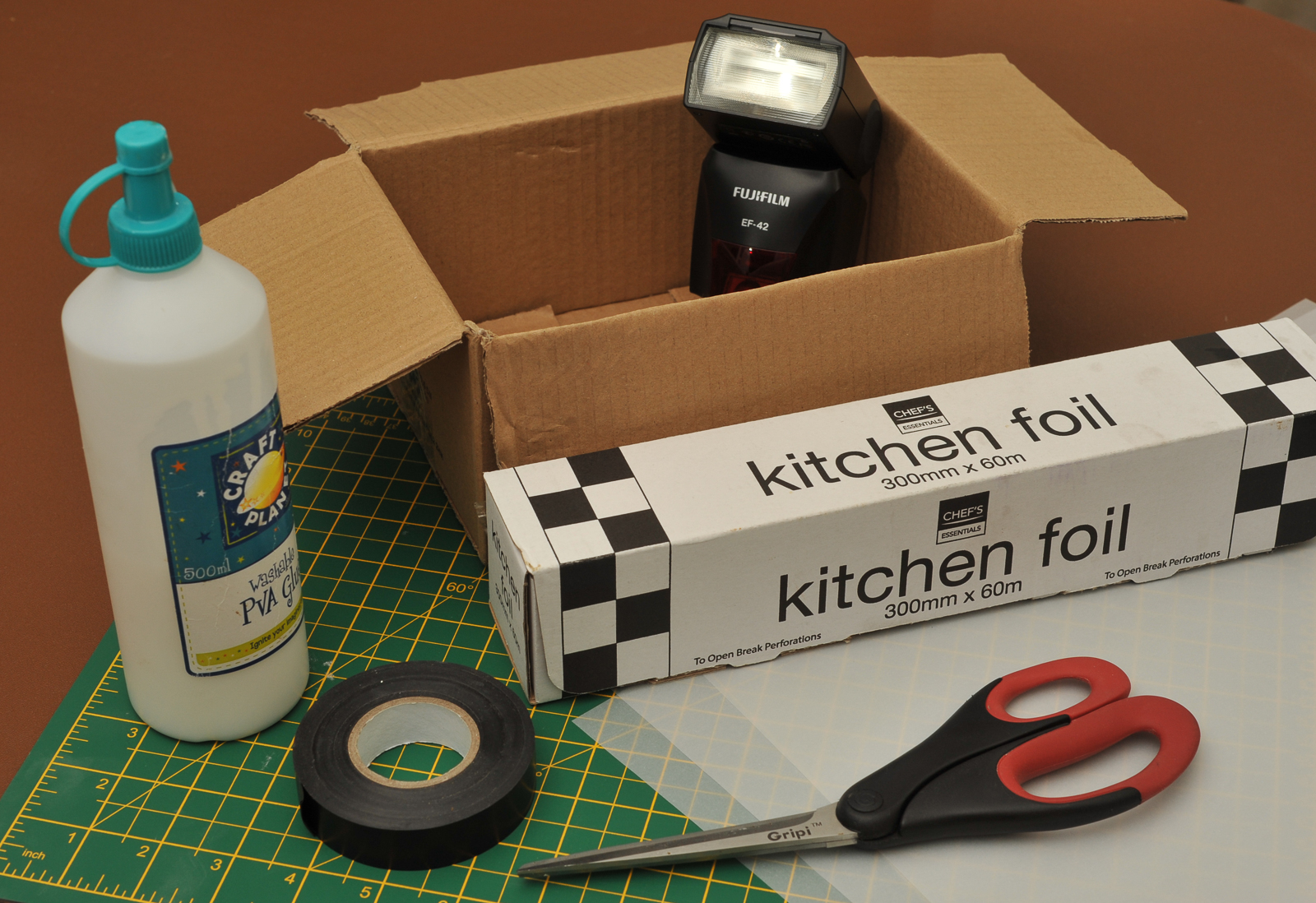 I was in my garage the other day and realised something; it’s full of empty cardboard boxes. It’s a shocking confession I know, but what with eBay and other things you just never know when you might need a box, right? The 53 I counted, however, maybe considered a little excessive. I started to think whether I could trim the numbers down a little and my mind drifted to the fact that I’d been taking some flash images a couple of weeks earlier where I’d been a little disappointed by the harshness of the direct flash light. Within moments, a plan was hatched.

After a root around in the section of the garage not populated with cardboard, plus the kitchen drawers, I ended up with this selection of goodies with which I decided to make a softbox:

I started by placing the flashgun in a central position on the box and drawing around it to give me an approximate shape of the flash head.

Grabbing the scissors, I cut the shape out, going slightly inside the lines I’d drawn to make sure that the head fitted through snugly.

Confident my cutting skills had progressed from primary school, I taped the sides of the box down. They could have been cut off, of course, but I preferred to tape them down to create slightly more robust sides to the box.

I used a couple of lengths of foil to coat the inside of the box. This could be glued down if you wish, but the nature of foil meant that it moulded to the shape nicely and stayed put. There’s no need to smooth it down, just as long as the light can happily reflect around, you’re fine.

Having covered up the hole in the box, I then cut a second hold through the foil and pushed the flash head back through.

Putting the box to one side, I took a sheet of the tracing paper and folded it in half to provide the diffusing panel for the front of my softbox. As it transpired, I only needed the one sheet, but you could use more if you wanted an even softer result.

The tracing paper was then taped on all four sides of the box leaving it ready for action.

Now, it’s pretty evident that my box had a flaw in that it covered up the AF illuminator. As I was only working in dim light, this wasn’t an issue, but if you want to shoot in pitch black you’re going to struggle. There are no worries about metering, though, the X-T2 I was shooting with has TTL metering so I could be sure of accurate exposures.

So, just how good was my softbox? I’d say the results speak for themselves:

This first image was taken without the softbox attached. As I was close to the subject with the EF-42 flash mounted on the camera’s hot-shoe, there’s an issue with coverage. The flash hasn’t illuminated the bottom part of the frame very well, plus the shadows behind the soft toy are very harsh. All in all, not the best.

With my softbox in place, however, there’s a real improvement. The coverage is much more even and the shadows are far less harsh.

But this shot is arguably even better, created by pointing the flashgun, with softbox attached, straight to the ceiling. It’s created a lovely even top light to the toy, which looks more like studio lighting than a flashgun with a cardboard box stuck on it.