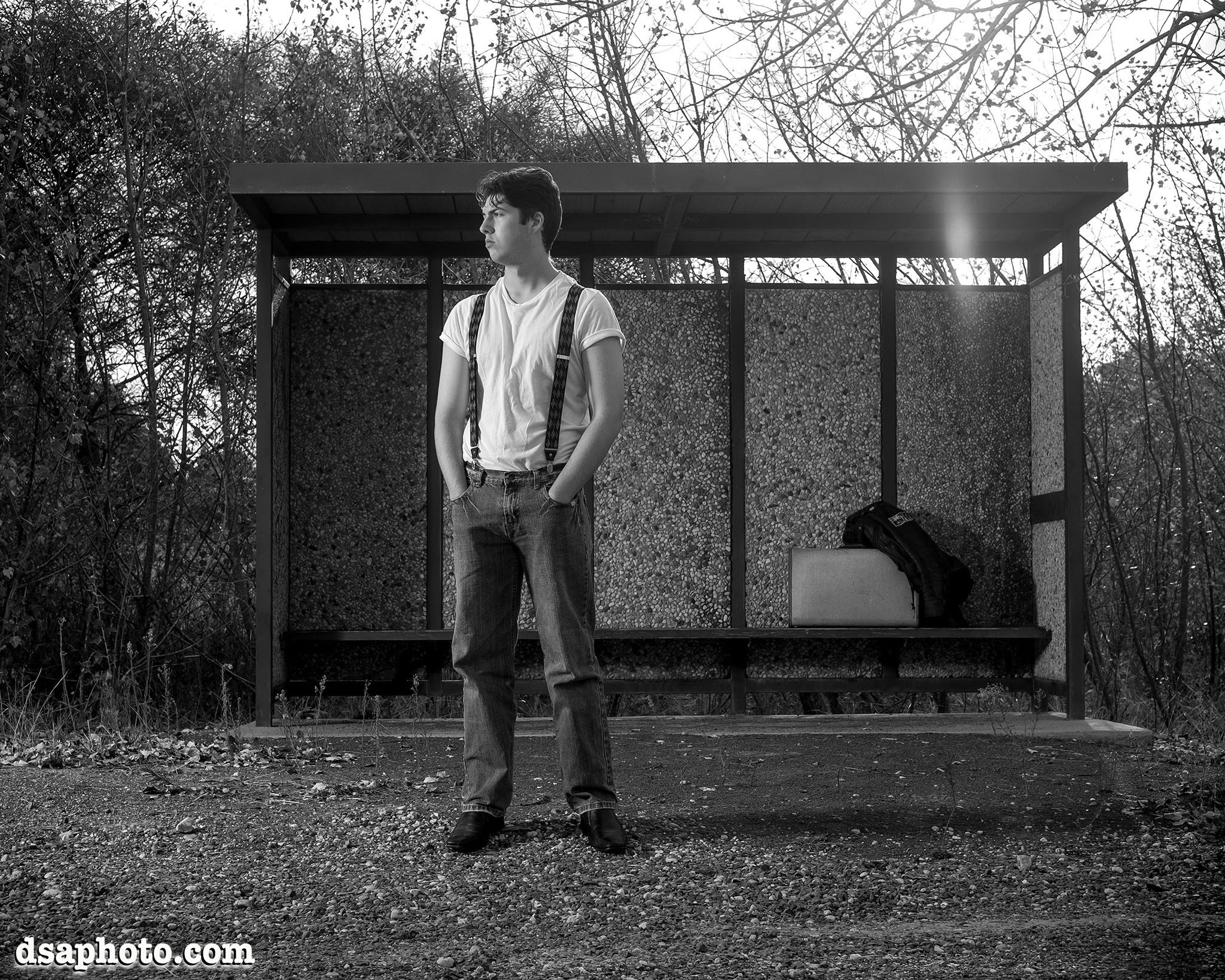 Maybe I’m an old dog, but the must choose sides thing in the DSLR vs. mirrorless debate, in my cantankerous opinion, is pointless, manifestly boring and would only be cool if you gave me popcorn and the opposing sides guns.

I like DSLR’s and think they’re pretty highly evolved now and do what they’re supposed to do without much fuss or fanfare. I’ve been working with them since they were the new thing and being unfavorably compared to film cameras.

That said, a lot of what I see happening in the new world of mirrorless and Fujifilm in particular, is getting hard to ignore and I’m intrigued by the possibilities of both lighter weight and the electronic viewfinders.

So, has the mirrorless come of age?

Really, having never touched one, the best way to find out is to try one and after a little shameless begging for a camera to review for my blog, Leigh Diprose of Fujifilm Australia hooked me up with a Fujifilm X-T1 and lenses for a four-week test.

Fujifilm, with the X series, may seem relatively new to all you hipster kids from the internet land, but a lot of us old codgers know the name well thanks to some brilliant film cameras of the past like the mighty medium format 6×9 range finders, 6×8 studio cameras and the epic, wish I never sold it, X-pan that Fujifilm made for Hasselblad in the 90’s.

I’ve also pounded thousands of rolls of Fujifilm through various 35mm SLR’s and medium formats with ASTIA being a favorite for magazine portrait work, VELVIA for landscapes and the at the time revolutionary 800 ISO NPZ colour neg for anything low light that still needed nice colour.

Out of the box, and after a few tentative test frames the X-T1 is already living up to that heritage.
Initial photos have great colour and sharpness, and I’m well on my way to being smitten all over again.

The best thing about mirrorless, in my opinion, is the electronic viewfinder and this is where mirrorless systems and the X-T1 in particular really set themselves apart from a DSLR. It’s so vast looking in there, I found myself looking around as much as through and after a little customization in the menu’s I had everything set-up and singing.

Yes, it takes a minute to get used to the electronic view after a lifetime and millions of photos through an optical finder, but I can already imagine that this is the way all cameras will be heading given all the amazing possibilities of the technology.

There are two things that really stand out with the vast viewfinder of the X-T1. The first is seeing your exposure, as set, before pressing the button. In manual shooting, this is a revolution compared to the old exposure scale in an optical finder and FAR more accurate. I also found myself doing far less chimping once I got confident that what I saw WAS what I would end up recording. This was doubly so when I was shooting in black and white mode where the viewfinder reflected this.

Having the actual picture flash up in the finder after taking the shot took longer to get used to, and initially I turned the mode off a couple times out of frustration, but by the end of my test I became a real fan of the feature and found myself shooting less and chimping much less to get the same results.

The second stand out is manual focus.

Generally, I always shoot landscape stuff off a tripod, in manual focus and have been using Live View to get the proper depth of field I need to cover front to back sharpness. This works very well on a DSLR, but is slow, because it means I need my glasses on to see the rear screen and off to compose through the viewfinder. Tedious.

On the X-T1, I set-up the viewfinder to give me the smaller magnified side box with focus peaking in red and found it a very fast and very accurate way to get proper focus without bothering with the glasses or rear screen.

As a bonus, once the diopter was calibrated for my vision (or lack thereof) I could also check the accuracy of my focus on the finished shot through the viewfinder without touching my glasses.
This is a really cool feature in hard sunlight where the screen can be hard to see.

While all the touchy feely stuff on the X-T1 is spot on, the retro vibe a great fashion statement, the camera is actually a very ergonomically sound and thoroughly modern piece of gear.

I found the control layout, after a little familiarisation time, very efficient and perfect for the way I normally shoot in full manual mode as there is no need to drop the camera or dig into menus or look at a dial setting to know where I was.

After walking around Melbourne and shooting random street stuff with my family I can also see why the wedding shooters seem so happy with the Fujifilm stuff because it’s almost invisible. I’m a fairly big guy and when I work with a couple DSLR’s hanging off me and a vest full of lenses it’s hard to hide the fact that I’m taking pictures and sometimes felt very intrusive, but with the Fujifilm X-T1 I felt unnoticed and it’s obviously a better set-up for getting candid pictures.

With apologies to my brain, I did the math on weight and found that a Fujifilm system that closely as possible matched my Nikon kit weighed in at around half or maybe a bit more if I included the number of spare batteries to match up numbers of shots out in the field. Obviously, the weight’s not a big issue in a studio, but out in the mountains on the river or trail, it’s a huge advantage.

The zoom I found the most surprising as I don’t often use zooms, preferring the predictable image quality and light weight of a prime. I did find the XF16-55mmF2.8 R LM WR a very, very sharp lens with exceptional image quality in the extreme corners of the frame – by the time, it was stopped down a bit. The XF16-55mm lens was heavier when compared to the two primes, however saying that it is still MUCH smaller and lighter than it’s Nikon or Canon counterparts.

I can see this lens when matched with the XF50-140mmF2.8 R LM OIS WR being the great value and a great set-up for traveling.

The XF35mmF2 R WR had amazing and hard to believe image quality given how tiny it is. Despite looking almost like a toy, it feels very solid in the hand and focuses silently and quickly. Though not a tree shooter as such, I did a lot of walk around stuff with this lens and it’s extremely discrete when coupled with the X-T1.

My favourite though is the XF56mmF1.2 R lens. As a long time portrait photographer, I’m a real fan of this focal length because it keeps you near enough to the subject to interact but is still long enough to get some isolation. At sub F2 settings, this lens will challenge anyone who thinks that great bokeh is solely for the full frame club as it renders incredible out of focus areas.

In sharpness and detail I felt it out resolves images I shot on my Canon 1Ds MKIII with the legendary EF85mm f1.2 L lens thanks to the X-T1’s lack of an AA (Anti Aliasing) filter. At the other end of the aperture spectrum, the 56mm was awesome for landscape shots captured at F8 through to F11 where it’s possible to get razor sharp images corner-to-corner and front to back.

All three lenses felt very solid, well made with fast, accurate autofocus and great handling and it’s worth mentioning that, from what I can see, Fujifilm has the best range of dedicated APS-C sensor lenses available with few options missing when compared to the full frame systems.

Resolution is a double-edged sword. On the one hand, it can give you incredible detail in your shots with room to crop and the ability to print big at will, but with the other hand, it can slap you back to the stone ages if you don’t dot your I’s and cross your t’s with perfect technique.

The 16 Megapixel APS-C sized sensor in the X-T1 is probably a good compromise for most enthusiast shooters in that it has enough grunt to print a well-shot image large and would easily handle any screen requirements.

It doesn’t surprise me, given Fujifilm made some of the best films ever, that the colour of the X-Trans CMOS sensor is first rate. With the various film simulation modes, I got excellent Jpegs straight from the camera with ‘VELVIA’ being the favourite for landscape and fishing stuff and the black and white mode for portraits.

It’s also a sensor that punched above its weight in terms of detail in my testing and I would put it in the same class as a Canon 21//22 Megapixel full frame if matched lens for lens. That said, I think what I read about the X-Pro2’s 24MP sensor would be better again and more like what I’m used to seeing from my Nikon D810.

However it might compare to a DSLR, another mirrorless or anything else, the Fujifilm X-T1 is an absolute joy to use and I didn’t put it down for 4 weeks.

Is the camera better or worse than anything else – yes, no or whatever, it doesn’t matter, because in function, feel and image quality the little Fujifilm is awesome and you couldn’t punch the smile off my face when I had it around my neck. Well done Fujifilm!

David is a grumpy, semi-retired old music and magazine photographer with poor hearing, little hair and too many kids that would rather fly fish than do anything else. His work has been featured widely in most mainstream Australian magazines and many more from around the world. You can follow David on Instagram, Facebook and read more articles on his blog.

Filed under Be Inspired