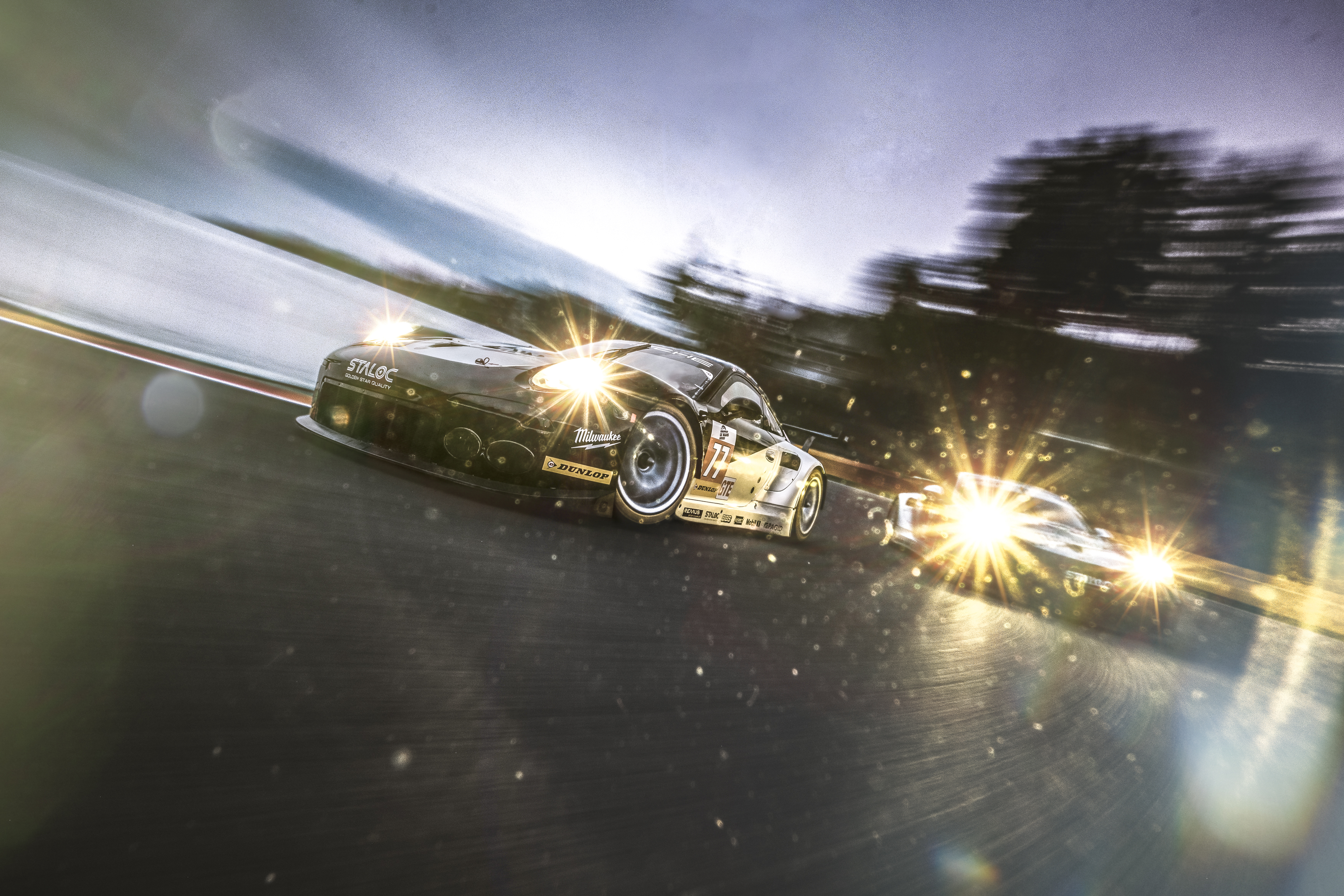 Creative Director and Fujifilm X-Photographer John Rourke invited German race team Proton Competition to bring both of their Porsche 911 RSR 991 race cars to La Source at the recent ELMS weekend at Spa-Francorchamps in Belgium to photograph their car using a rig and a Fujifilm X-T2 to capture a shot of the two race cars from an unique vantage point.

The rig is a 6 metre carbon fibre four section boom made by UK firm Car Camera Rig that is fixed to the car using high powered suction clamps.

The camera, which is a FUJIFILM X-T2 fitted with the XF10-24mm ultra-wide angle zoom lens, is then fixed in position to the end of the boom. To achieve the correct exposure the camera is fitted with a Formatt Hitech filter system, in this case a Polariser and an ND Grad and then an ND filter to extend the shutter speed to around 10 seconds. This allows Adrenal Media to take images from a position that would not be possible to take when the cars are on track racing.

Using a long shutter speed of between 8 to 10 seconds the movement in the shot is achieved at walking pace by team members pushing the cars and the result is an image that makes it look like both Porsches are moving at racing speed.

“We started asking teams to provide us their cars back in May for these special images but this shot with Proton Competition is the first we’ve done with two cars from the same team,” said John Rourke.  “The reason we use the rig is to take images of the cars from a vantage point that would be impossible to do in the real world.”

“Each shot takes around 20-30 minutes to complete once the rig is attached to the car,” John continued. “The rig itself is lightweight thanks to the carbon fibre construction so it doesn’t take long to put in position, the biggest issue we have is finding a place to attach the suction clamps to the bodywork of the car.  Some cars are wrapped, so the suction clamps don’t have a perfect seal, so we usually do a pre-shoot recce with the team to ensure there are mounting points where the rig can be securely attached to the bodywork of the car.”

“The X-T2 is the perfect camera for this type of shot. The 24mp X-Trans III sensor gives us high resolution images to work with and the tilt screen is a real help when the camera is attached upside down to the end of the boom.”

“The biggest challenge with shooting with two cars was keeping both Porsches moving at the same speed and we did the shot a few times to make sure we had one that we were all happy with.”

Once an image is selected, it is then edited by John to remove the boom and other elements that shouldn’t be in the final shot.  The result is a dramatic image that highlights the excitement of racing in the European Le Mans Series.

Fellow X-Photographer Jeff Carter was on hand with his Fujifilm X-T2 to capture some behind the scenes images of this photoshoot.

The next planned rig shot will be with the Toyota Gazoo Racing Toyota TS050 Hybrid LMP1 at Fuji Speedway when the FIA World Endurance Championship visits Japan on 14-16 October.