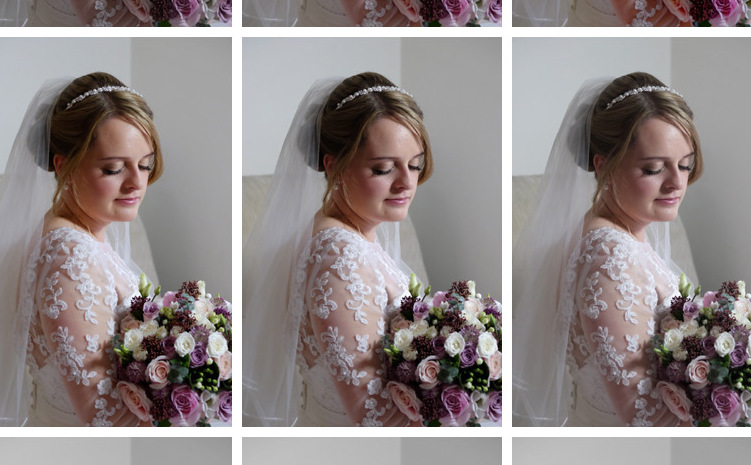 My wedding workflow for the past few years whilst shooting with Nikon DSLR’s has consisted purely of shooting RAW and processing the files initially in Lightroom and with some additional tweaks in Photoshop with Nik and OnOne software plugins. The aim is to produce a set of colour and exposure corrected JPEGS for supply to our clients. Since switching to Fuji for most of our wedding work I wanted to compare the film simulations in ‘real life’ shooting situations. Just to clarify, this is not about shooting JPEG only which I know some photographers do but this is part of a bigger picture in exploring the possibilities of producing ‘in camera’ JPEGS from the RAW files for supply direct to the client with little or no external processing after the wedding.

The original RAW files were transferred back to a memory card and then processed in camera. All other settings eg colour. shadow,etc. were 0. The images are in the same order from top to bottom L-R as the film simulation selections in the camera’s menu, starting with the unprocessed RAW file then Provia, Velvia, Astia, Pro Neg Hi, Pro Neg Standard, BW, BW Yellow, BW Red, BW Green, Sepia.

The first set of images (above) are some Bridal portraits taken in the reception room as we were rained off for outside shooting.

There was a large expanse of windows with natural, overcast daylight behind me.

Of the colour versions I don’t think it will come as any great surprise that Velvia is just a bit too saturated for this type of image and personally I find Pro Neg Standard to ‘flat’. That leaves Provia, Astia and Pro Neg Hi. Of these Astia has produced the warmest image, closely followed by Provia and then Pro Neg Hi. Astia will be my first choice for similar lighting / subject in the future.

So far as the black and white versions, my choice here for skin tone would be the Red filter but the overall contrast has reduced with Green producing the darkest lips. I think I might be wary in using the green filter as a ‘redder’ skin tone could cause the skin to darken more than I would wish.

This was at Bride’s home before the wedding (above). There was a window to camera right but it was quite dull outside and it provided very little light so we set up our Lupolux LED650 with a showercap diffuser to camera right.

Once again the winner for me is ‘Astia’, however they are all acceptable, even ‘Velvia’ hasn’t gone too far with a nice boost to the flowers. Of the black and whites, ‘Red’ has given the lightest skin tones and ‘Green’ the greatest contrast. Yes, you guessed – still a thumbs down for ‘Sepia’.

The lighting was gorgeous here, with the sun low and diffused slightly through clouds to camera left. (Above)

Would be quite happy to use ‘Velvia’ here. It hasn’t affected skin tones too much – and wow! – those Fuji greens! I was a bit surprised at the very little difference with the black and white filters. Understandably the ‘green’ filter has produced the lightest image with ‘red’ providing the most contrast – just. Still wouldn’t use ‘sepia’

Whilst putting this test together it became possible via an update to apply ‘Classic Chrome’ to existing X-T1 RAW files using Lightroom (5.7). Below are the 3 files with this mode.

For me ‘classic chrome’ is just a little on the ‘grungy’ side and I’m not quite sure yet where it might fit in with our current style of wedding shooting / editing. However, I can’t wait to use this in lots of other genres, especially ‘street’ and some ‘urban portraits’.

As mentioned at the beginning of the post, the aim here was to find out how usable the film simulations are straight out of camera in ‘real life’ wedding shooting. I am working on switching film simulation modes during the wedding to suit particular lighting and subject matter and then using the resultant JPEGS as part of our workflow to supply direct to our clients with no further post processing. DR settings are also going to play a big part in this, especially when shooting high contrast scenes. We will continue to shoot both RAW and fine JPEG and will of course use the RAW files as needed for post processing if the need arises.

To be honest I’m knocked out by the quality of JPEGS produced in camera, the noise reduction is also truly amazing. I would prefer a stronger filter effect with the black and whites as there isn’t a great deal of difference between them all.

For me the Sepia simulation is very limited for our particular requirements and I don’t envisage using it at all.