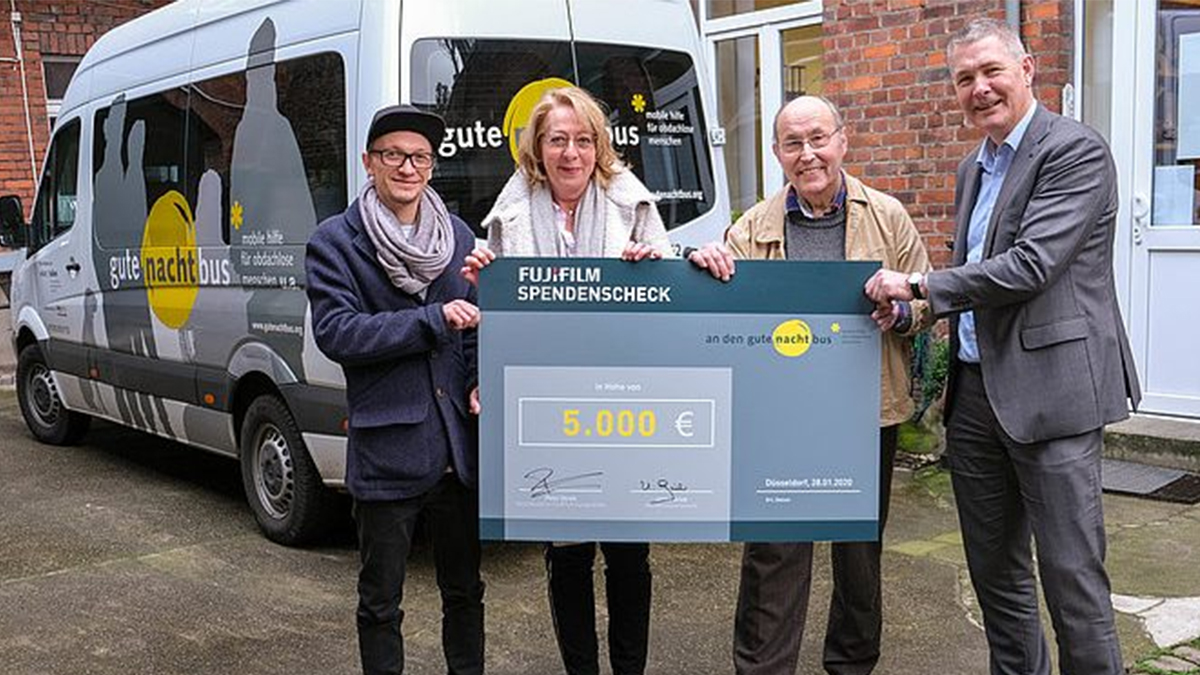 On Tuesday, 28 January 2020, FUJIFILM Europe GmbH handed over the clothing and monetary donations collected by staff and management to the Düsseldorf gutenachtbus (good night bus). The bus, supporting homeless people in the city, is an initiative by the vision:teilen e.V. foundation in cooperation with street magazine fiftyfifty.

Usually, the gutenachtbus can be spotted at night, supporting the homeless in the downtown areas or at the main train station. Today, however, it was already on the road at 11 a.m., as Brother Peter Amendt, Franciscan and head of vision:teilen e.V., and Daniel Stumpe, media and public relations officer at vision:teilen e.V., welcomed visitors from multi-technology company Fujifilm for the donation presentation at the foundation’s offices on Schirmerstrasse 27 in Düsseldorf, Germany.
Peter Struik, Managing Director at FUJIFILM Europe GmbH, and Ulrike Grieb, chairwoman of the Works Council, brought the collected clothing donation and the symbolic check for the total donation amount of € 5,000, to the gutenachtbus and its carrier association vision:teilen. The Fujifilm workforce had raised donations of € 2,500 over the Advent Season, which management then doubled.

Today Fujifilm focuses on medical technology, which is why many of our products help people improve their health every day. As a company, we have set ourselves the task of creating value with precisely these products and our services. I am therefore particularly pleased that our workforce also carries this idea into local and social projects, such as the gutenachtbus, and is thus involved on site

explains Peter Struik, with a view to the commitment of the workforce.

Through various projects, Fujifilm employees had the opportunity to donate in ways that best suit each individual: During the entire Advent Season, clothes were donated which the gutenachtbus passes on directly to those in need or sells in its own second-hand shop for the benefit of the foundation. In the entire Fujifilm office building on Heesenstrasse in Heerdt / Düsseldorf, the red and white vision:teilen donation boxes were available for classic cash donations and every Wednesday in December 2019 the canteen offered a gutenachtbus menu, where part of each purchase price was added to the donation. At the Fujifilm Christmas Party Raffle, the workforce was able to buy lots and win prizes. Fortuna Düsseldorf, which has partnerships with both Fujifilm and vision:teilen e.V., also donated some prizes, such as fan scarves and VIP tickets for a home game. The proceeds from the raffle also go to the gutenachtbus.

Ulrike Grieb likes to remember the reactions of the Fujifilm workforce to the donation period in December:

Helping homeless people in our neighborhood during the cold season has been very well received by our colleagues, who have been very happy about the opportunity of direct donations of clothes and money.

The gutenachtbus supports homeless people with clothing, warm meals and conversation. This mobile support starts at 10 p.m. when many other points of contact are no longer available.

The gutenachtbus is one of three major projects by vision:teilen e.V. in Düsseldorf and is dedicated to the homeless in the city. We are very happy about Fujifilm’s commitment to this social initiative. The project is financed exclusively through donations and the need is now particularly great in winter

Fujifilm brought the topic of homelessness closer to its own workforce for the given occasion and also raffled off tickets for the Strassenleben city tour, an initiative of the street magazine fiftyfifty and the cultural center zakk, for a more intensive discussion of the topic. The city tours are led by (formerly) homeless fiftyfifty sellers and deal with personal stories of those affected and places for homeless people in Düsseldorf.