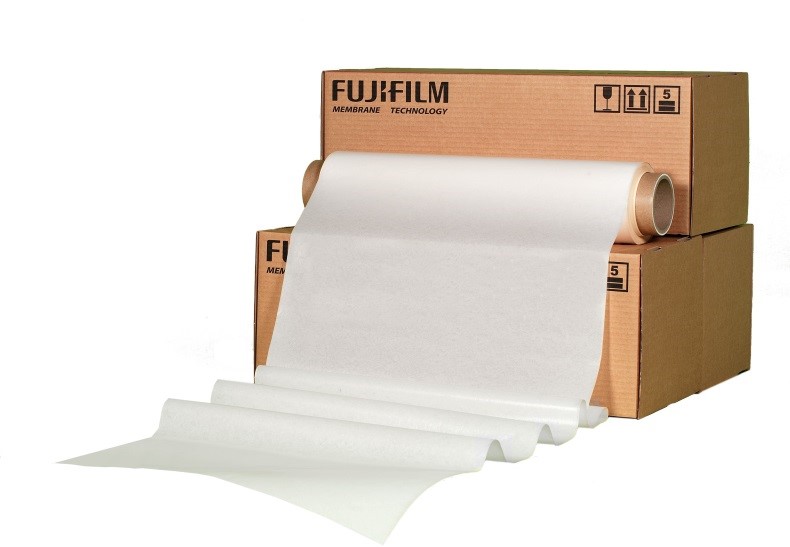 Fujifilm’s polymer engineering expertise made it a market leader in applying thin layers on top of each other to produce a fantastic result: a photographic image. But the company’s expertise today extends far beyond the boundaries of photography. Fujifilm’s technologies can be found in many different industries, from pharmaceuticals and chemicals to power generation. One of them, membrane technology, makes the selective separation of even the finest components in water or gas possible.

The membranes at the core of this technology are ultrathin sheets developed for different applications that only allow certain particles to pass through them. For example, e-separation technology is based on the principle of an electric field and Coulomb’s law. That’s the law about oppositely charged particles attracting each other and equally charged particles repelling each other. Different membranes are used for e-separation applications which allow either all or only certain particles to pass through depending on the desired result. The membranes used to separate gases operate according to a different principle. Instead of an electric field, they use pressure difference to move molecules through the membranes.

That gives you an outline of how membranes work. Now let’s see how they’re used in practice.

Fujifilm’s Electro-Separation Technology can be used to obtain “blue energy” by exploiting hydropower, but not using a water wheel.

This process is somewhat more complex. Let’s take a look at how it works…

Reverse Electrodialysis (RED) works according to the reversed principle of electrodialysis, using the difference in salinity between saltwater and freshwater to generate energy. Under the influence of an electrical field, the fresh water and salt water try to balance out the ionic charge, creating a field of voltage which can be used to generate energy.

The amount of energy gained depends on several factors:

Let’s take the “Afsluitdijk” in the Netherlands as an example, where water from the Waddensea meets fresh water from the IJjsselmeer at a disposal rate of, 200 m3/second. The salt concentration ratio of these two bodies of water is 18.8 : 0.35, allowing Fujifilm’s ion exchange membranes to generate around 45 MW of power, which is enough to supply approximately 115,000 households with blue Energy without the emission of greenhouse gasses. Unlike other alternative energy sources such as solar and wind this energy source is constantly available and does not require facilities for energy storage.

As mentioned earlier, Fujifilm’s membrane technology can be used for a range of applications outside the water sector. Specially developed gas separation membranes are used in the oil and gas production sector to remove certain components of the gases as they are extracted so that when the gas is used to generate energy, it releases fewer pollutants into the atmosphere, reducing negative impacts on both people and the environment.

The natural gas that is transported via special pipelines from the gas field to the consumer has to comply with certain regulations. For example, there is a limit on the amount of hydrogen sulphide (H2S) and carbon dioxide (CO2) content that the gas can have to protect both consumers and pipelines. These undesirable components of the gas mix impair its heating performance and accelerate the pipeline corrosion process.

Whereas Reverse Electrodialysis (RED) uses an electric field to separate ions, the gas separation process uses pressure difference to separate gases. The pressure forces the small-sized molecules of hydrogen sulphide and carbon dioxide through the membrane, leaving the larger methane molecules behind because they are too large to penetrate the thin layers. The spiral wound, multi-layered membranes are designed to withstand high pressure and, at the same time, filter out CO2, H2S and H2O, leaving the methane behind.

The gas mix flows into the membrane unit from one side. By exerting pressure, small molecules are caused to penetrate the multi-layer membrane transversely, while the remaining methane constantly follows the stream and flows out of the membrane unit into the next unit, where the process is repeated to remove the remaining CO2 residues from the gas. The membrane units are quick and simple to assemble and dismantle, so they can easily be moved to new oil and gas production areas. The ecological aspect hasn’t been neglected either, despite the fact that crude oil and natural gas production is sometimes viewed as harmful to the environment, because Fujifilm’s gas separation membranes create a safer and chemical-free process that releases less methane and CO2.

Electro-separation technology and the ion exchange membranes are also used for other applications, one of which is the treatment of contaminated groundwater to remove nitrates, bromides, fluorides and other harmful substances to produce potable water. Electrodialysis Reversal (EDR) is based on the same principle as Reverse Electrodialysis (RED), which is used to generate blue Energy. The difference is that that a DC voltage field is applied and there is only one feed water stream flowing evenly through all cells from one side. The electric field generated by the electrodes ensures that positively charged ions (cations) and negatively charged ions (anions) pass through the membranes. This separates the contaminants (concentrate) and the potable water (diluate) alternately into different cells and they ultimately flow out of the stack separately from each other.

Human population growth is driving agricultural food production and livestock population growth, which in turn is leading to an increase in fertilizer use and animal manure volumes. Those fertilizers and the ammonia from the manure are slowly but steadily seeping into our groundwater as nitrates. Fujifilm’s membrane technology solves this in two ways. Firstly, it removes ammonia (NH4+) from the liquid manure at the farms to prevent groundwater contamination. And, secondly, it removes the nitrates from contaminated groundwater so that it can be used as a potable water supply again.