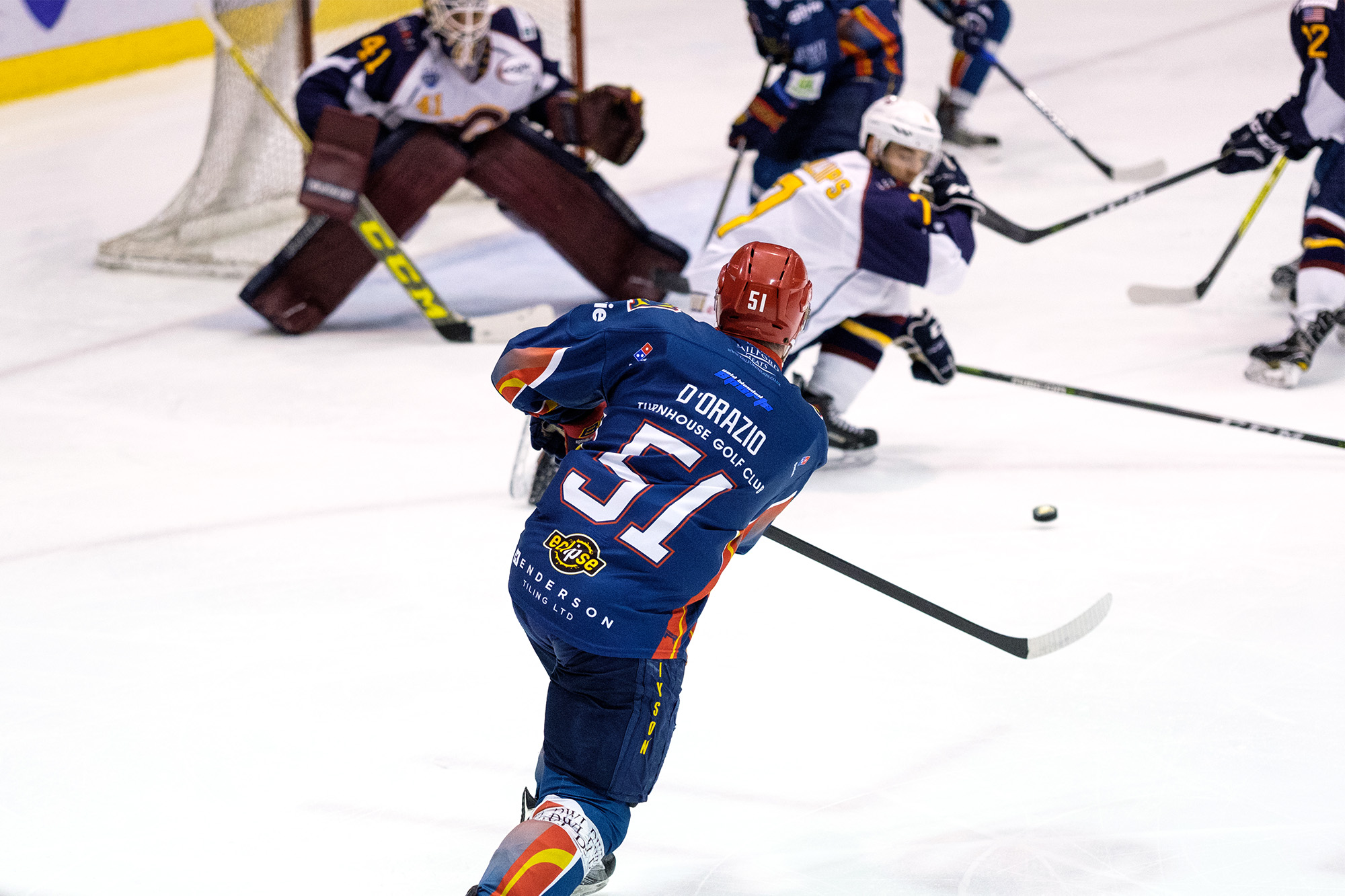 In a series of articles X Photographer Jeff Carter will be shooting at sports events in the UK and showing how to capture great images with the Fujifilm X Series without the need for a media pass. In this blog Jeff gives you all his top tips for photographing an ice hockey game.

With the 2018 Winter Olympics on the horizon I decided to feature a sport that will one of the highlights of the games in South Korea – Ice Hockey.

There are twelve clubs playing in the Elite League, the premiership of the ice hockey world, and I contacted my local club, the Edinburgh Capitals, to feature a home game against the Guildford Flames for part 11 of the ‘Sports Photography as a Spectator’ series.

Ice Hockey is played at a high level in the UK and attracts players from all over the world. The game takes place over three 20-minute periods and is fast and exciting to watch. There are six players from each team on the ice at any one time but they rotate the players from the bench regularly, it is sometimes difficult to keep up with which players are on the ice.

The goalie is usually unchanged throughout the game but it is not uncommon for him to be substituted for a skating player in the last few seconds of the game in an all out effort to score.

Instead of a ball, the game uses a puck, which is a 143g circular piece of vulcanised rubber 7.62cm x 2.54cm (3 inch x 1 inch) in shape. The puck moves at a tremendous speed when struck and it is very difficult to keep your eye on it.

The game is very physical and the players are well padded and wear helmets. However injuries still occur and tempers can run a little hot during the game.

I attended an Edinburgh Capitals home game against the Sheffield Steelers without a camera the weekend before to observe the play and take notes of the best places to stand.

First thing you will need to do is contact your local club and request permission to take photographs.

While all clubs allow mobile phones during the game, they might refuse you entry if your turn up unannounced at a game with a camera and an interchangeable lens combo. If you do receive permission to shoot make sure you don’t block the view of other spectators.

I did take all four Fujinon zooms and a couple of faster primes. I started off with the XF100-400mm telephoto zoom but soon it back in the bag because the maximum f4.5-5.6 variable aperture was just too slow in the artificial lighting conditions and I was close enough to the action to use a shorter focal length.

I was using the new FUJIFILM X-H1 and two FUJIFILM X-T2s.  The X-H1 was fitted with the XF50-140mm f2.8 and one of the X-T2s with the XF90mm f2 prime, which was perfect in the tricky lighting conditions. I used the XF16-55mm f2.8on a third body to video the game for this feature and had the XF10-24mm f4 in the bag for any ultra wide shots if needed.

I didn’t bother taking a flashgun to the game as they are not allowed to be used in case it distracts the players.

Also remember to wrap up warm, this is an ice rink after all and there should be a clue in the name. While the temperatures are not too bad, you will need layers and I recommend a hat.

You are attending a game in a stadium environment and you usually buy a ticket with an allocated seat. If you do this I recommend buying a ticket in the away fans part of the stadium. The reason is two fold.

One – there are likely to be less away fans, so there are more opportunities to move around and there are less people for you to avoid getting in the way of if you stand up. Secondly you will be shooting across the rink towards the home fans, which will mean the background in your wider shots will look better.

Get down as far to the front as possible so you are shooting over the glass surrounding the rink but at the shallowest angle. The further back you go the the more you are looking down on the action.

The club may allow you to go rink side. Make sure you stand behind clear glass rather than perspex. Perspex marks up really badly when the players or the puck hits the screens and you wont be able to shoot through it. Even the glass panels are tricky as you need to be shooting straight on through the curved panels. If you shoot at an angle you may get weird distortions or at the very least a degree of degraded image quality. But these rink side shooting positions are by far the best for action shots.

This is an extremely fast game to shoot and one of the hardest sports I have photographed in 25 years as a professional photographer. I shoot 200mph race cars for a living but they are fairly predictable in the direction they travel, whereas an ice hockey player is speeding around an ice rink and can change direction in an instance.

Then there is the puck, which is very hard to follow as it is very small and travels at tremendous velocity when struck.

You have to work very hard to get good action shots but the effort is certainly worthwhile.

The artificial lighting made things a little tricky. I had to set the colour balance on the cameras to adjust for the slightly magenta colour hue from lights in the Murrayfield Ice Rink.

It was also not that bright and I was forced to set the ISO to 5000 with the f2.8 lenses to get a reasonable 1/500s shutter speed which was adequate to freeze the action. With the 90mm f2 lens I was able to set a higher 1/1000s shutter speed.

Also remember to adjust your exposure compensation dial if using one of the auto exposure settings. The predominantly white conditions will fool your camera into under exposing the image so you need to dial in +1 or even +2 on the compensation dial. I shoot in manual exposure and adjust the shutter speed and ISO on the front and rear drives. The lighting is pretty consistent across the rink, it can be slightly darker in the corners, but your shouldn’t need to alter the exposure during the game.

The continuous autofocus on both the X-H1 and X-T2 coped really well in the challenging lighting conditions, picking up the players quickly and effortlessly, even through the glass panels rink side. I set the camera to AF Custom Set 2 – ignore obstacles. This helped during the play when players turned quickly and other players got between you and the subject. The system certainly isn’t infallible but it worked really well.

I set the AF to single point and set a medium sized square in the centre of the viewfinder to give me the best chance of locking on to a player. The camera was also set to ‘boost’ to improve the reaction time and also enable the 11fps on the drive.

I also experimented with some slow pan shots of players at 1/60 and even 1/30. This did produce some interesting results, giving a real sense of speed in the final image. However the hit rate also dropped as well, with a 1 in 10 shots coming out OK.

As I said earlier, flash is banned at matches as it could distract the players. Leave your flash at home as you wouldn’t want a disgruntled ice hockey player in full kit and a hockey stick coming after you because you made him miss a vital shot.

Edinburgh play in the Elite Ice Hockey League consisting of twelve teams and this is the premier ice hockey league in the UK. There are also five national leagues – Div 1 and Div 2 North, Div 1 and Div 2 South and a separate Scottish League.

Check out the British Ice Hockey website to find out your local club and who to contact.

Find out more about the X Series cameras and Fujinon Lenses.

PREPARING FOR THE EVENT

• This is an indoor event so the weather wont be an issue. But dress warmly as this is a winter sport played in an ice stadium.
• Food and drink. There are excellent facilities at most match venues.
• Always check with the club before travelling to make sure they allow cameras. I recommend you speak to the club ahead of travelling to the game as they may refuse you entry if you turn up at an event with a camera with interchangeable lenses.

• Stay in the fan areas at all times.
• Do not get in the way of other fans around you.
• Obey an instructions given to you by the event officials.
• If you are given permission to shoot rink side, stand slightly back from the glass screens. They do flex when hit hard by players and they have been known to shatter on rare occasions.

Thanks to Scott Neil, the owner of Edinburgh Capitals, for allowing me to shoot and film at the recent game against Guildford Flames and Ian Coyle for his expert advice and assistance.

If you wish to attend a game at Edinburgh Capitals with a camera please contact the club on enquiries@edinburgh-capitals.com

8 comments on “Sports Photography as a Spectator – Ice Hockey”