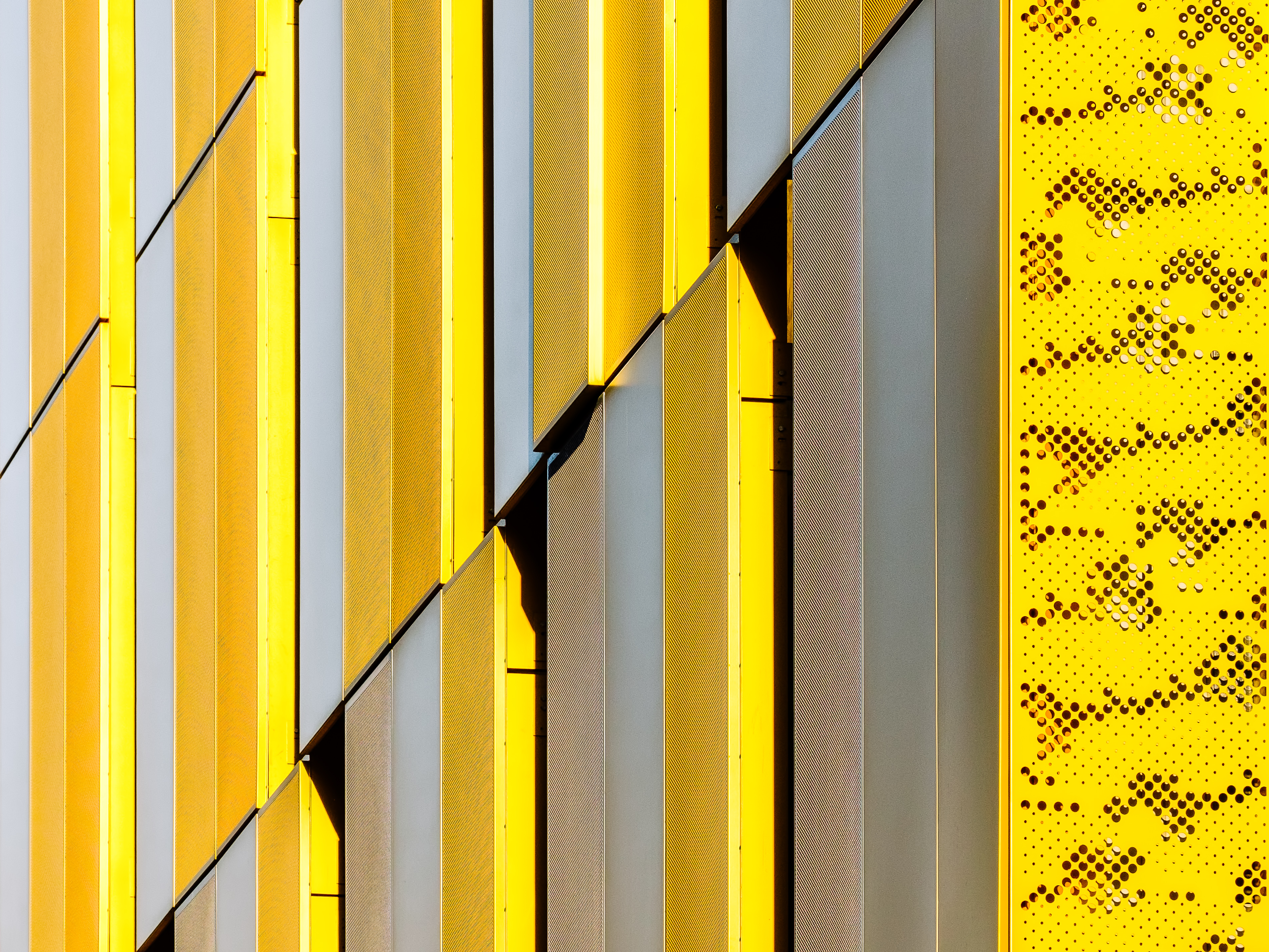 I first became interested in the XF100-400mmF4.5-5.6 lens when I had an idea for a specific photo series which came to mind as I was travelling around my home city: Manchester. There’s a lot of history here but there’s also been a great deal of new architecture built in the last 10 or 15 years. For a few months, I imagined a series of images where I could get closer to the architecture that was catching my eye everyday around the city. I wanted to explore the relationships between the old and the new, whilst examining the styles and materials of the recent developments more closely and the XF100-400mm was the definitely the lens to do this. Not only was I interested to see how a lens typically used for sports and wildlife photography could work in a city; but I was excited about the new perspective it could gave me on buildings that I pass on a daily basis.

One of my favourite Fujifilm lenses is the XF50-140mmF2.8 for the compression you get at the longer focal lengths. This is what I was most excited to play with on the XF100-400mm. Just like when shooting mountains or other elements with large scale, I think it looks great when a subject is shot from further away, using a longer lens to create a sense of smaller distances between the foreground and background. This technique was used by the likes of Ansel Adams in landscape photography and I wondered if it could translate to urban photography, too.

One of the best features of this lens is the ability to shoot from a great distance. When shooting tall buildings, one of the biggest concerns is degrading the resolution of the image on correcting verticals. With a lens as long as the XF100-400mm, you can shoot from a very long way away and get the tops of buildings looking almost straight in camera. The tweaks to perspective that need to be made in post are minimal which results in a better quality image.

The two shots below are from a building I see every day out of my window, the Beetham Tower. I hadn’t previously been able to get this optically close to its upper reaches. It is officially the tallest building in the city and this lens allowed me to photograph the highest point of it with very little perspective distortion. Not only is this a technical point to make, but it meant I could shoot with a lot of sky in the composition, too, which creates a lovely colour relationship with the architecture and gives a nice element of negative space in the frame.

It is this distance that became both the challenge and the fun with using this lens. I would walk around the city and see an interesting composition or nice bit of light play within a scene; but then have to think about where in the city to get to in order to get the right shot of it. Often having to walk 5 or 10 minutes away from the scene you want to capture in order to get a good vantage point, or enough distance from away so I could compress the scene down the way I saw it in my head.

The lens allows you to get so close in that you can start to visually abstract buildings into their basic forms and shapes. It was a joy to play with pattern, colour and texture when shooting architecture because of the longer focal length. Often when shooting architecture I am looking for visually interesting lines, light, shadow and geometry. The XF100-400mm is a great lens for finding these elements and creating really interesting crops of much larger scenes.

Being such a large lens, physically – it is not the most subtle or discrete, however, it was still great to photograph people with. The shot on the left (below) was taken from street level, looking up at the top floor of a large corporate building in Spinningfields. The man was on the phone looking out of the window and saw me on the street with my camera and tripod. I put my thumb up to see if he was okay with me taking his picture to which he gave me a thumbs up back. The exchange made us both smile, and I got a picture of him that I’m really pleased with. I love how the colours of the building and the morning sky tone nicely together, and the proportion of the figure within the frame.

The image of the man on the bridge was taken more discretely and was actually shot from over 200 metres away. I like the way he silhouettes against the evening summer sky in the same way that the dark frame of the bridge does; his legs even matching the angles of the structure.

In terms of how I actually used the lens; it was very much a case of trying to achieve sharpness across such large areas like buildings and compressed cityscapes. If there is a lot of sunlight around, you can just about hand hold the weight of this lens – but 99% of the time, I was shooting from a tripod. At such long focal lengths, any small movements of the camera or lens are picked up in the image so I’d say a tripod or monopod is crucial. This slows down your process, which is a good thing for helping your composition.

I was generally shooting at apertures between f7.1 and f14. Higher apertures to create sharp images of large expanses of architecture like the Beetham tower (below, right) and lower ones to create a softer foreground to draw the eye to the building in the background (below, left).

I really enjoyed the challenge of shooting with the XF100-400mm lens and the change of mindset from the way I usually approach architectural photography. Due to the size and weight of the lens, I wouldn’t carry it with me on every shoot, but I can see there being a need for it every once in a while in my workflow.

If you shoot wildlife or sports as well, then it could be a great investment. The lens is sharp and a joy to use. It allowed me to get perspectives on the buildings around me that would have only otherwise been possible by drone or helicopter – and that in itself is so impressive.

Super telephoto zoom lens covers the range of 152–609mm (35mm format equivalent). To minimize the colour aberration, a typical problem for a telephoto lens, the optical construction comprises 21 elements in 14 groups with 5 ED Lens and 1 super ED Lens. The lens achieves highest image quality in its class. The lens supports the photographer to shoot super-telephoto images hand-held with the 5.0-stop optical image stabilization, quiet high-speed autofocus driven by the linear motor, and compact and lightweight design weighing less than 1.4kg. In addition to the weather & dust resistant, and -10°C low-temperature operation construction, the front element is applied with water and dirt repellent coating to make the lens even tougher.