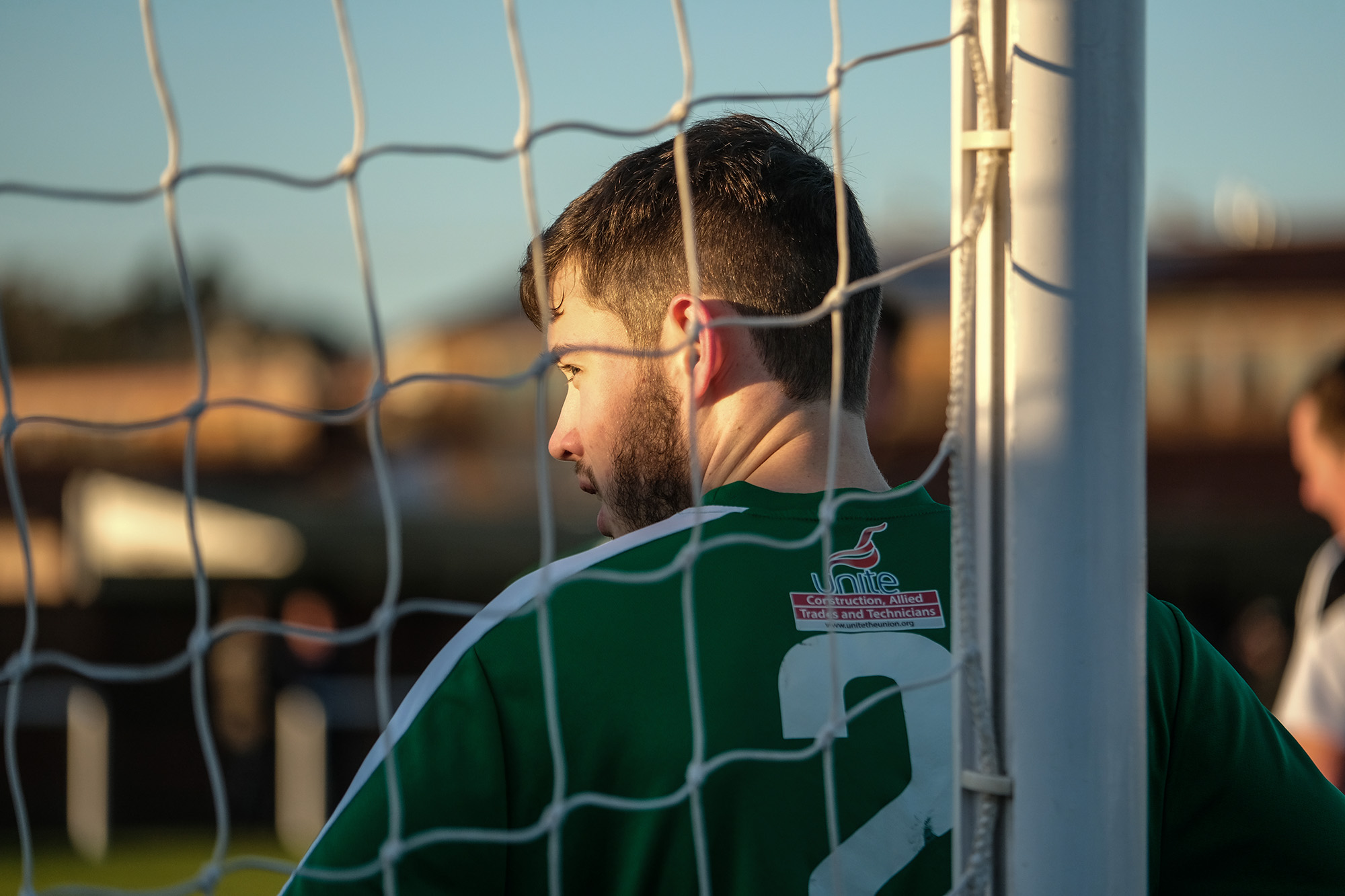 In a series of articles X Photographer Jeff Carter will be shooting at sports events in the UK and showing how to capture great images with the Fujifilm X Series without the need for a media pass.  In this blog Jeff gives you all his top tips for photographing football matches.

Sports Photography as a Spectator – Football

Football is undeniably the world’s favourite sport as it is watched and played in every corner of the globe. The English Premier League is the most-watched sports league in the world. The premiership is shown on TV in 212 territories with a potential audience of 4.7 billion people. All the major news outlets cover the matches each weekend on TV and in print, with revenues generated accordingly. This popularity has filtered down to the lower professional leagues as well.

This has made media passes highly sought after and the prospect of amateur sports photographers getting decent pictures from the spectator areas in the all seater stadiums almost impossible, even if you were allowed to take a camera and telephoto lens into the ground in the first place.

However there is an alternative for the aspiring football photographer and this is going along to your local non-league club. The access at non-league games is much better, with smaller grounds and few restrictions as to where you can stand and take pictures. If you contact the club in advance and explain that you want to take pictures you will probably receive a warm welcome and even better access.

Non-league clubs provide the perfect training environment for the future stars of the Premier League, so you might be photographing the next Wayne Rooney before they become a superstar.

My local club is Dunbar United. The ‘Seasiders’ play in Scotland’s McBookie.com East Premier League and I went along to the last game before Christmas against Thornton Hibs in a mid-league table crunch match for part ten of the Shooting Sport as a Spectator series.

Most non-league football grounds are enclosed, with some having small grandstands for the fans, but you are rarely limited to one area for the match. As football is a winter sport and the ground is open to the elements, check the weather forecast before you travel and dress accordingly.

The weather on match day at Dunbar United was sunny but the temperature was hovering around freezing, so thermals, a hat and gloves were the order of the day due to the fact that I was going to be standing around for 90-minutes.

Football is a fast flowing game and you have to have quick reactions to follow the action. If you have never shot at a football match before I suggest attending a couple of games without a camera to see how the game is played. As with all sports, if you can read the action, your images will improve exponentially because you will be able to anticipate and react accordingly.

You can stand right next to the touchline, so the two Fujinon zooms were perfect, with the XF100-400mm capturing frame filling shots right up to the half way line from behind the goal. A good alternative to the two long zooms I have in my camera bag is the Fujinon XF55-200mmF3.5-4.8. I used to have one of these compact telephoto zooms and can highly recommend it as an alternative to the more expensive pro zooms.

Most grounds have catering facilities and it is worth taking the time to get a hot drink and a snack at half time to warm up. You could take a snack and a bottle of water as well but I never bother when working in a stadium because the facilities are usually very good.

First thing is you must respect the pitch and stay behind the spectator barriers. The touchline is there for the linesman to run up and down and get an unimpeded view. So stand back a few feet and take pictures from the designated areas.

I shoot from behind one of the goals so I have shots of the players coming towards my position. Standing at the side of the pitch will give you a different angle but invariably the players will be moving across the frame and I prefer to have the action coming towards me.

Vary the height of your shooting position. Photographers shooting from pitch side positions in the big stadiums are sat down and the low angle gives the final image a different perspective than those taken from a standing position. While there are no restrictions for photographers at non-league matches I recommend trying some shots from a low position.

From your chosen position you need to check your backgrounds. Some non-league grounds have distractions such as brightly coloured machinery or even parked cars, which will draw the eye away from the subject in the final image. If the background is busy, move your position if possible to avoid these distractions. Use a wide aperture to thrown the background out of focus.

A football match lasts 90-minutes, 45-minutes each way. Now 90 minutes sounds like a long time but when you are shooting a fast moving game like football, it goes very quickly. So you, literally, need to keep your eye on the ball and follow the action closely.

The X-T2’s AF system is excellent for tracking moving objects and since the latest firmware update this ability has been improved even further.

I set the camera to ‘boost’ to improve the reaction time, while the AF-C custom setting was set to ignore obstacles (set 2) so the AF kept the lock on the player with the ball and didn’t get confused by other players as they entered the frame.

A single point AF is best. I set the focus point on the player’s upper body as they run with the ball. You can use zone focus, but with twenty two players plus the referee running around on the pitch, there is more chance of the focus lock being lost. So I tend to stick with single point AF for team sports.

As usual I used matrix metering to ‘see’ the exposure in the EVF and I shot in manual exposure mode. The shutter speed dial was set to T and the rear command dial used to adjust the shutter speed. I also set the ISO dial to ‘A’ and used the front command dial to select the required setting. My left hand controlled the aperture setting, but I tended to leave this wide open and adjusted the ISO and shutter speed accordingly.

The weather was bright but the winter sun was low in the sky casting long shadows across the pitch. This did provide some challenges for getting the exposure correct as players moved from the light to dark areas and this meant adjusting the ISO setting to keep the shutter speed at an action freezing level.

To freeze the action a shutter speed of at least 1/1000 is needed. With the 100-400mm zoom I would increase the ISO to compensate for the slower f5.6 aperture to maintain a shutter speed of at least 1/1000. With the 50-140mm f2.8 the two stop advantage made it easier to keep the ISO lower. I did occasionally drop below 1/1000s but only when the action had slowed, such as a goal kick or a throw in.

I don’t use the EF-X500 for football or rugby. However there are no rules stating you can’t use flash during a game. If you want to use flash I recommend you speak to the club ahead of the game to inform them of your intentions and see what they say. If you use flash and a player is put off at a decisive moment…. Well you don’t need me to explain further!

Football is played at every level in every town across the UK, so there will be a local club close to you. Non-league grounds vary from open pitches in the local park to small stadiums that can seat thousands of fans.

A good source of information is the Pitch Hero website which is used for most of the UK’s non-league teams. Other good sources of information are the official English and Scottish Football Association websites.

Find out more about the X Series cameras and Fujinon Lenses.

PREPARING FOR THE EVENT

• Check the weather forecast and dress accordingly.
• Take covers for your cameras. The X-T2 / X-Pro2 / X-T1 and the majority of Fujinon lenses might be weather resistant but I always cover the equipment when not in use.
• Food and drink. There are facilities at most match venues.
• It might be worth checking with the football club before travelling to make sure they allow cameras. If you speak to the club ahead of travelling to the game they may grant you access to the pre match training session.

• Stay in the fan areas at all times.
• Keep your eye on the ball at all times, especially if you are behind the goal. A ball travels at speed when kicked and can hurt if you are hit and it can damage camera equipment.
• Obey any instructions given to you by the event officials.