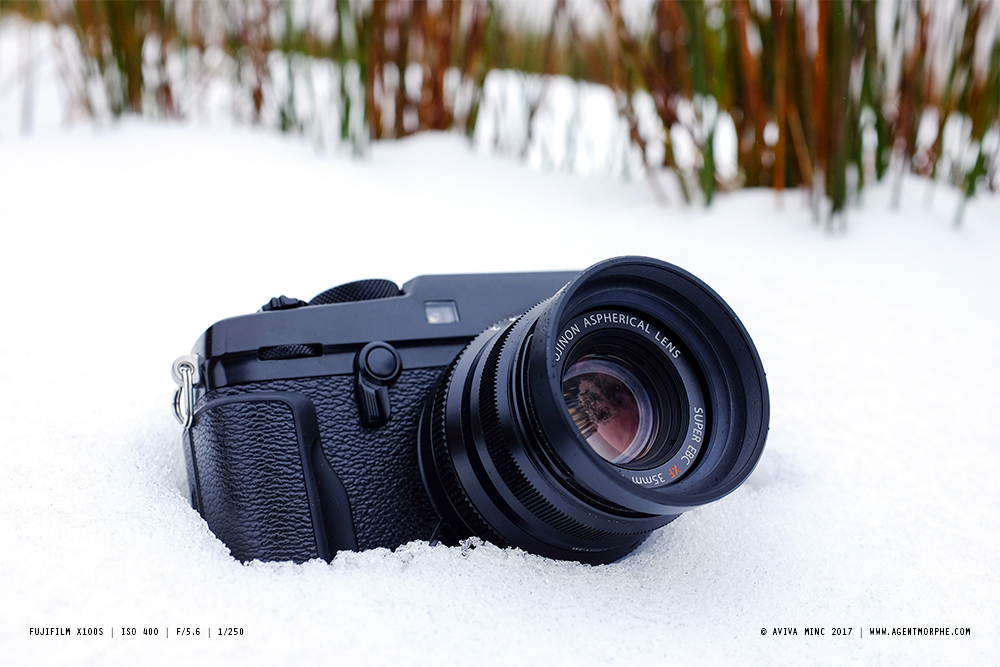 Maya Sugiharto and Aviva Minc are Visual Storytellers. Photographers and Short Filmmakers based in Melbourne, Australia.  They are the Co-Founders and Creative Directors behind Agent Morphe.  They love to travel (with their cameras) on adventures and road trips, off the beaten tracks. To see more of their photos, visit them on Facebook and Twitter or on their personal Instagram accounts.

Untethered: 7000 – Adventure to another world with the Fujifilm X-Pro2

From the sand storms in the isolated deserts in Broken Hill Northern Territory, to the ice blizzards in the most southern state of the nation, Tasmania, we are putting ourselves, and our Fujifilm X-Pro2 and X100S cameras to the test.

We set ourselves the goal of seeing and photographing the circumference of Tasmania over a seven-day period, by road in winter – to document the landscape and to test how well our Fujifilm digital appendages would cope in the extreme conditions.

We jumped on a plane from Melbourne to Hobart – first stop our Hotel – top recommendation Ibis Styles (only a few month old) for views as we stayed on Level 9, great photography ops and clean, modern facilities.

As soon as we landed and had our car hire sorted, our first day goals were to get as far South as we could drive in Australia. We travelled down to Kettering, Middleton, Charlotte Cove, Huonville, Southport and all the way down to the most southern point in Australia – Cockle Creek.

The best way to describe this part of Tasmania would be quant and serene. There were fishing villages dotted along the journey, a wooden boat shed and builder, apple cider cellars and caves with thermal springs (Hastings) which we didn’t get time to see. There are heaps of photo opportunities as you can see below are just a few.

On our second day, our goal was to scout and find the filming locations of the Kettering Incident created by Vicky Madden and staring Elizabeth Debicki (Porchlight and Sweet Potato Films). The show was filmed at various locations around Kettering and Bruny Island itself, however it was apparently also filmed around Myrtle Forest – where you get the awesome green, mossy lush forest scenes. The film is about two women who go missing – not necessarily the best premise to head into the woods on our own, but we really wanted those beautiful lush photographs that many of us know Tasmania to show off.

We collected all of our gear and were about to head off onto the Myrtle Forest trail up to the waterfall, which was dark, wet and slippery. However were greeted by an odd man and his barking pit bull who seemed to appear again at various parts of the track. We had flashbacks to Wolf Creek crossed with the Kettering Incident itself, and to be honest were actually a little concerned about our safety.

In retrospect, we probably should’ve turned around – however the determination to get what we came for, out won our logic and we headed up the track. It was spooky, but beautiful.

After surviving the forest and its inhabitants, we drove east towards Dunalley, where you find a fish and chip shop that is on Tasmania’s top eats, and then we drove down to the Tessellated Pavement where our plan was to get some shots at sunset but things don’t always go to plan – however when we arrived, two guys told us about three whales that were playing in the bay at Remarkable Cave; so we took their word, jumped in the car and headed down there pronto! We didn’t have the zoom lens to be able to capture the whales but we certainly heard them talking all the way past sunset, which was pretty amazing.

Next up: to the mountains.

“The only way of finding the limits of the possible is by going beyond them into the impossible.” Arthur C Clarke

It was time to go north. We were heading to Cradle Mountain to photograph, hopefully, a snowstorm that was due to arrive overnight and possibly the Southern Aurora if the clouds/snow passed.

There’s two ways to get to Cradle Mountain from Hobart – via the West or straight up. The more picturesque route is via Georgetown to the West, where you go through some pretty amazing terrain, however because of an incoming storm warning for snow thunderstorms that night, we decided to play this one safe.

You pass by some beautiful jagged mountains, such as Mount Roland, on the way. So Jurassic, other worldly, and powerful. As we were driving, our GPS announced “ turn right, and you will arrive in Paradise (photograph below) – that it certainly was. To top it off we were driving through this whole area during golden hour! As you’re approaching Cradle, the landscape changes significantly. It is surreal, and ethereal – eerie and another dimension perhaps.

We arrived safely after a long 5 hours drive to our lodge at Cradle Mountain. The closest supermarket is 45 minutes away, so be prepared – bring supplies! You have limited choices for places to eat, and those available are pricey, so be ready for that. Once we re-fueled our body, charged our cameras, it was time to rest our souls and get ready for the next adventure the following day.

The next morning, sure enough we woke up to -1 degree temperatures and a covering of snow and continuous snowfalls and blizzards – beautiful and breathtaking! Now we had the day to explore Cradle Mountain and Lake St Clair with a big dose of snow, and an opportunity to really test the Fujifilm X-Pro2 (which is promoted as being weather resistant) and the Fujifilm X100S!

The mountain pass costs $20 per adult for the day, but in fact is for 24hrs, so if you enter at 1pm as we did, it lasts until 1pm the following day, which is fantastic. We were fortunate to be there whilst it was snowing very heavily, and got the chance to throw the Fujifilm X-Pro2 and the WR lenses into the snow, to test them for their durability. We can honestly say that they live up to our expectation and their reputation. Even the X100S performed awesomely in the snow. Fujifilm does not recommend using it in a snowstorm, but we found the casing and the design made it really easy to use in those conditions.

Timing is everything, and again, we were at Lake St Clair during the golden hour for sunset, which was gorgeous. Highly recommend, especially when it’s snowing. The park gate counts the cars and only allows a certain amount of cars in at once, mainly due to the road only being a single lane but also to stop it getting too crowded there. A brilliant idea because we really got to experience it without the huge crowds you might see at the Twelve Apostles for example. Although it might have been because it was snowing so much too, that the traffic was low.

The next morning, we went back into Cradle Mountain Park to see the Waldheims Cabins – there was talk from the locals of wombats hanging around the area, so we were very keen to get up close and personal with them.

We only had a few hours before we needed to begin our long drive back to Hobart, but our wish did come true and we got to meet a wonderful friendly wombat whom was very willing to have their photograph taken.

Sadly, we had to leave Cradle Mountain without any opportunity to see or photograph the Southern Aurora and her dancing lights. The cloud cover just never passed, as we had snow the whole time we were there, but according to the readings and reports we had, if the clouds had passed, there was meant to be some pretty amazing lights.

We have to say, it was pretty difficult to leave Cradle Mountain, and a definite highlight to the trip. Such a surreal and majestic place to spend time in, and the snow just added to the whole mystique. We wished we had planned a longer visit there, a chance to go on the many walk trails around Lake St Clair in the park that would have been beautiful with the snow covering (and very cold!).

We were meant to spend the last two days of the road trip driving down the east coast, but fell ill with the flu, and had to skip it and headed to Hobart instead.

Hobart is a great base to work from, especially when travelling to the lower parts of Tasmania. We decided to go back to the Tessellated Pavement at Eaglehawk Neck (because we had missed it when we went chasing the whales on our second day) and get some shots of the gorgeous rocks on the beach.

That was followed by a drive up to snow covered Mt Wellington, with the plan of getting some great shots of Hobart, and some footage of more snow. Whilst driving up the mountain, we came to a Whippet that was running scared on its own on the road in front of our car, and instead spent the rest of our day helping a local couple find that same dog that ran into the forest in the cold past sunset. So we never reached the top, or got any photographs, and as it turns out, the road to the top of Mt Wellington was blocked (which can happen on the spur of the moment) due to ice and snow. So it’s best to call the City of Hobart and the rangers to get updates before you go!

This was an incredible trip. Definitely not enough time in many of the places we visited, and not enough time to get to all the places we had hoped to see. We missed a lot. In researching the places to visit, other people had said that a week was not enough to drive around and see all of Tasmania. And we have to agree. You can rush it, but you’d be doing yourself an injustice because Tasmania is a good-looking place to photograph and you deserve to see it all. One way to do that would be to break the trip into three parts: the east coast; the south and the west.

Our heart breaks that we missed the Aurora Australis. However there are awesome opportunities to get some incredible shots from what I’ve heard and seen from others, in fact just a few days after we left, there was a peak in activity and a beautiful show in the sky, that could even be seen over Hobart. As they say, next time, in Tasmania, with our Fujifilm cameras!

“One’s destination is never a place, but a new way of seeing things.” Henry Miller