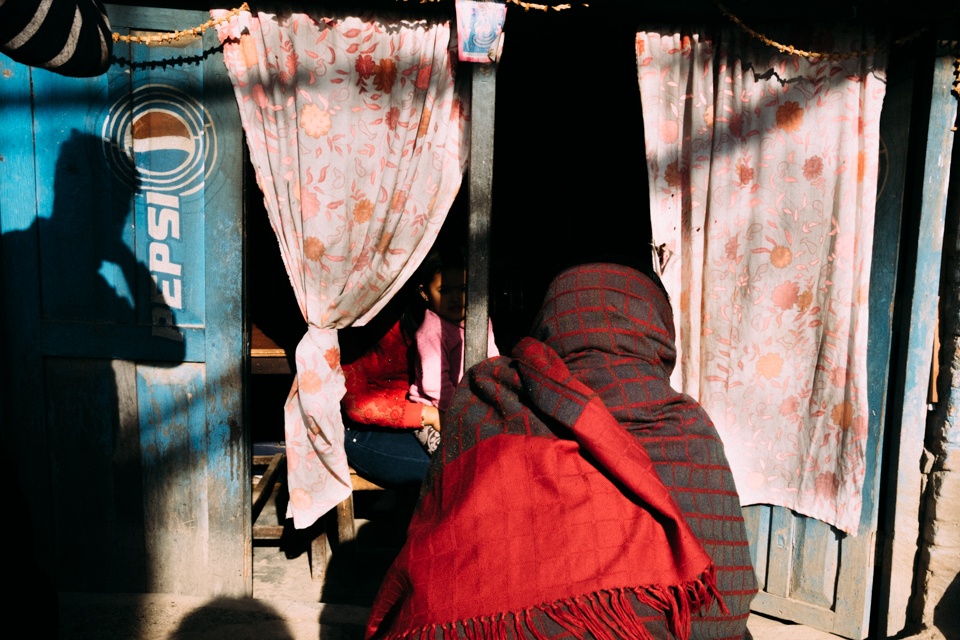 Welcome to the Third Series of Through a Photographer’s Eye. In this series, we continue to learn about Australian photographers and how they use X Series Cameras to photograph their world around them. Our fifth interview in Series Three is with Melbourne based photographer, Sarp Soysal.

Sarp, your story about how you started photographing with the X100 is quite interesting. Can you share it with us?

Ah yes, it is actually a pretty interesting story but a little tragic at the same time. I was travelling around Europe a few years ago on a personal photography project with a fair bit of gear: a Nikon body and a bunch of lenses and even speedlights. I also had a tiny little backup camera buried somewhere deep in my backpack that I never touched and had barely even used before.

One day when I was shooting in Paris, my Nikon was set up on my tripod, and for some strange reason that I still haven’t figured out, the camera fell off and shattered. As a broke backpacker, I wasn’t at all in a position to buy any new gear, so I had to reach into my bag for that tiny backup camera which was, as it turns out, a Fujifilm X100.

I didn’t have much experience with this camera, but it was all I had to finish my project. I remember sitting in my hotel room and trying to figure out how I was going to finish working with this one small point and shoot and its fixed lens. It wasn’t even a full frame camera, and this was around five years ago when full frame cameras were seen as the only professional cameras. But when I actually started walking around with the Fujifilm X100, something quite strange happened.

Through its optical viewfinder, the world looked different. It reminded me of being a teenager and using my dad’s analogue rangefinders. I didn’t have my bag of lenses for every possible shot, but through Fujifilm X100’s fixed lens, the streets started to look more romantic to me almost. I would say this was the beginning of a very important, almost spiritual, transformation for me.

In the way, I shoot, see the world and travel. While I felt pretty lost after I broke my Nikon, in the end, I managed to complete my project with some pretty special images thanks to my little Fujifilm camera. Needless to say, when I arrived back in Melbourne, I sold all of Nikon gear including that ridiculous backpack. And I have never looked back.

I think the biggest advantage of the Fujifilm X-Pro2 over X100 for me is its weather-sealed body. Already, while travelling, my X-Pro2 has withstood thunderstorms, unexpected torrential rain, bumpy bus rides, the ridiculous dust of Kathmandu and you name what else. The X-Pro2 feels tough in my hands, with its brick-like body. Secondly, obviously, the X-Pro2 is a much faster camera than the X100, which is very important for my photography style, mostly being snapshots on the street. Despite these things though, I still have my original X100 and from time to time, shoot with it, for old time’s sake. It will always have a special place in my heart.

If you could explain X Series cameras to someone who had never heard of them before what would you say?

Well, that’s quite a difficult question to answer. Let me put it this way: I wouldn’t explain X Series cameras from a technical perspective but more an emotional one. Pretty much every camera brand on the market at the moment, many of which I’ve shot with in the past, is almost like shooting with a computer rather than a camera. Most of their mechanical or software features that help sell them don’t really add much to your shooting experience and in my opinion, don’t serve a lot of purpose in the actual field.

X Series cameras, however, are so thoughtfully designed, with the photographer’s experience in mind, they feel to me like an extended eye, or like an additional organ. The dials, the viewfinder and even their compact size and grip really create a very organic shooting experience that doesn’t distract you from creating images with technical functionality or settings. So if you ask me to explain X Series cameras, I’d say they are cameras for creativity and for storytelling. They are cameras with soul.

Travelling is obviously high on your agenda, where have you been recently and can you share your favourite photo and tell us the story behind the image?

Most recently, I did a 100 days project, beginning with a road trip from Melbourne to Queensland and then three months travelling across Asia. I visited Indonesia, Malaysia, the Philippines, Vietnam and finally Nepal, where I am at the moment. I challenged myself to post a photograph everyday on Instagram that represented that day which turned out to be harder than I thought but I did it only skipping maybe 2 or 3 days. If I look back on my Instagram feed now, I’d say that my favourite image would be from day 40 of the journey, not necessarily because it is the best photograph but because of the story behind it.

I took this photograph in the south of Cebu Island (Philippines) on a modest fishing beach called Santander where all along the sand, there are tiny homes housing the families that collect seaweed and fish every morning. On one of my walks down to the beach, I found myself in the home of about 7 or 8 little hooligan kids who welcomed me with excited screams, dancing, playing and just general tomfoolery. These kids had next to nothing. Their clothes were ripped and dirty, their shoes didn’t match, and their play equipment consisted of some rope, a tree and a few planks of wood. I have honestly never seen happier, more energetic kids.

I ended up visiting these kids a few times during my stay on the island and got to know the family a little. I couldn’t stop taking their photographs because they got so adorably excited about having their picture taken and when they’d see their own faces on my LCD screen, they’d go crazy. I think I was the first person to ever take their photograph.

While portraiture isn’t my forte, I had to capture the kids’ faces which just beamed with spirit and hope. To me, this photograph is both a story and a lesson. It tells of hope and need and happiness and most importantly, of how much you actually need in order to be happy.

I’d say the biggest piece of advice I’d like to share with young photographers is not to get trapped in the technical side of photography or with camera reviews, equipment choices and stuff.

In my opinion, the most important first step is to get to know the gear that you have, whatever it might be, and understand everything about it so you can learn how to work with it and how to make it work for you. Because at the end of the day, when someone is looking at your photographs, no one cares really about what settings you used or what camera you have. It’s about the story you tell.

As any skill or art form, it requires a lot of practice. So take your camera with you everywhere and use every outing as a learning opportunity. Devote 20 hours a week, every week to making photographs. Get yourself a good pair of walking shoes and hit the streets or parks of your town or city and just shoot. Eventually, you’ll find your voice, and then you can focus on developing your own photographic style to tell your own stories.

You said the following statement after photographing with Fujifilm equipment over the last five years:

“My style has evolved to be a kind of poetry: subtle metaphoric images that tell stories through layers and light, shadows and figures”.

Can you provide a photographic example and explain the romance behind the image based on this statement?

Like I said before, X series cameras aren’t technically distracting so when I’m shooting on the street, I’m able to enter a kind of zone in which I am completely tunnel-visioned: all I see are light and shapes. Over time my photographs have moved more and more away from obvious compositions and stories and more towards combining elements under interesting light.

Most of the time, I take scenes that are seemingly nondescript but that through my lens I know will become something quite interesting. This image, for example, is one I took in Kathmandu, Nepal this month. While to my partner, it was nothing more than an ordinary Nepalese house front, to me, the shadows created a mysterious story: to whom does the hand belong? What is the child looking at? And why is he dressed so smartly while living in such an apparently poor house?

I like to make people wonder, and I think that my favourite kind of photographic story is not the one that I tell myself but the one that someone who looks at my photograph will imagine.

We noticed in your portfolio you have a number of portraits, can you give any tips on how to best approach people on the street to take their photo?

It’s funny that you say that because to be perfectly honest, I never feel that portraiture is my strong point. But I do like to include people and faces in my street scenes. I don’t really have any specific approach per se, but I do feel that if you’re a shy person, you will struggle as a street photographer. It is largely about engagement, with the elements around you and most importantly, the people you intend to photograph.

I suppose my photography reflects my personality in general as someone that tends to engage with strangers quite a bit, especially while travelling. To take someone’s portrait, is a kind of unspoken negotiation a lot of the time, relying on body language and your ability to read the situation. That said, a lot of the time, I usually avoid any kind of engagement before I’ve taken the shot.

My photography focuses a lot on candid, organic moments and so I like to be invisible. I even avoid eye contact because once the person is aware of the camera, the scene is shattered. Afterwards, I like to engage, chat with them or ask them questions depending on how open they are. And mostly people don’t have a problem with their photograph being taken.

The Melbourne streets are far from your travels, what do you like most about returning to the ‘Most Livable City in the world?

I love shooting on Melbourne’s streets. I guess it’s where I feel most comfortable. I have been living in St Kilda East specifically for almost seven years, and I’d say that the surrounding suburbs like Balaclava, St Kilda and Chapel Street are my usual photographic battlefields.

I know the culture and city very well, so I know how people usually react to my camera on the street which is important for the kind of work that I do. There isn’t the same chaos or exotic situations that you’ll find in Asia, but there is a very distinctive light that belongs to Melbourne that I think is almost recognisable. It helps to create its own kind of mysterious and dramatic images in an otherwise very orderly city.