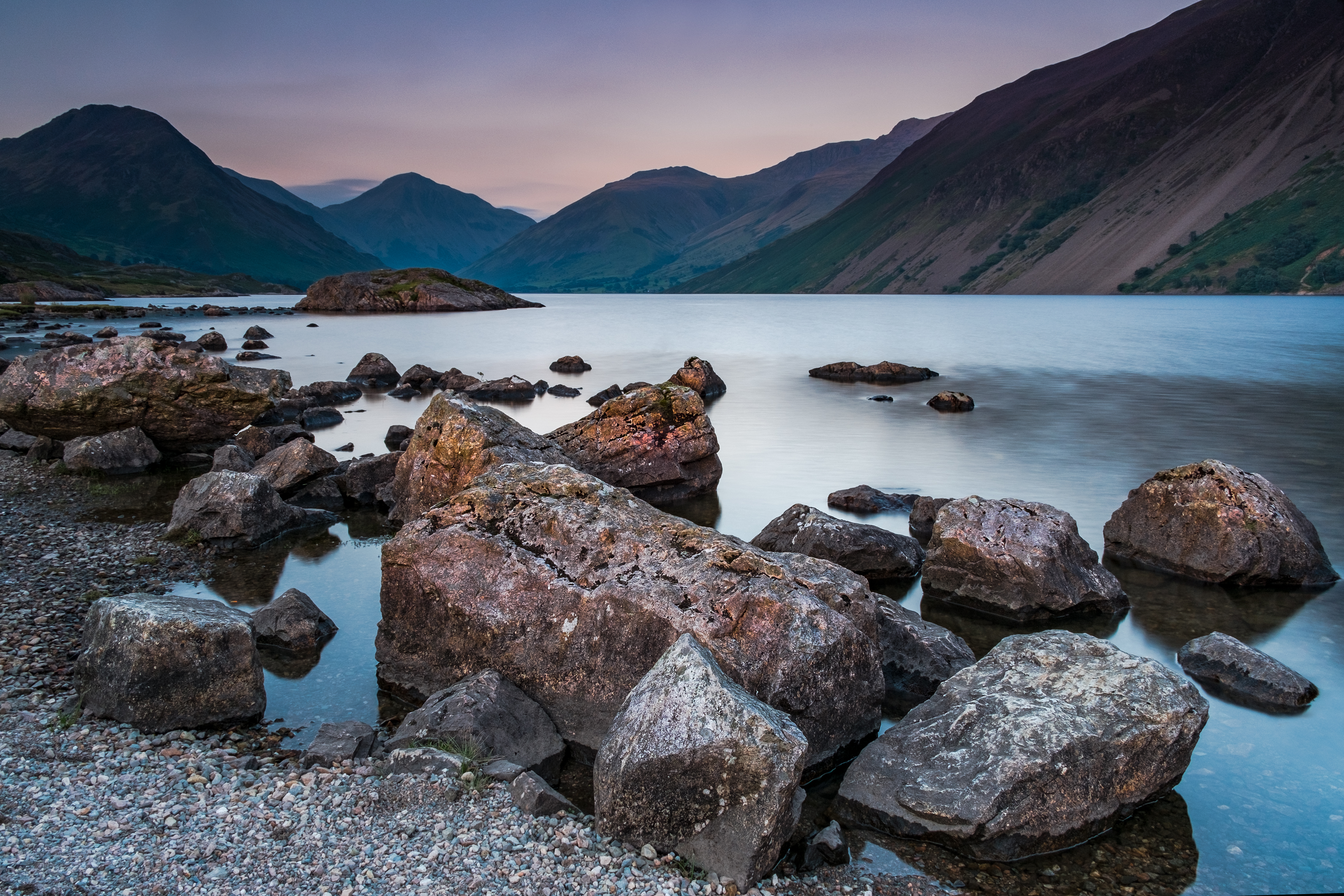 I very rarely know what I am going to have presented to me when I go out to photograph a landscape. I know what I would like but we don’t always get what we want. Not only are we dealing with nature’s finest creations, we are trying to balance it with whatever the ‘greatest lighting man’ throws at us. This can often please or displease in equal measures.

Of course you can guess as much as you like but the light varies so quickly on the Fells (mountain range in the English Lake District) that to plan can often lead to disappointment. I rarely go out with a fixed plan because of this. Yes I know where I am going to go and the probable location. However, on days when it just doesn’t cut it for me, I either make mental notes or take a snap to mark that place out as one for the future. Rather than simply waiting for the event, I look at those changes and aim to capture its different ‘moods.’

Once you find somewhere you like photographing you will naturally be drawn back to it and that becomes a good way of documenting those changes. Just like ‘us’, the landscape will show itself in different ways, just as we show ourselves to others.

A Different View of the Same Location

I fell in love with Wast Water in days when I had hair and I could stand there on a grey, rain soaked day and still see the beauty it exudes. Like all good relationships, we take the good with the bad so I am happy to take my kit there no matter what the weather or season.

There is one particular place on the shoreline that I like and find myself drawn to. Nature has decided to ‘dump’ a group of rocks there that please my eye and they create a good foreground for me to work with.

Wast Water was voted ‘Britain’s Favourite View’ and when you arrive there you can see why. The triumvirate of Yewbarrow, Great Gable and Lingmell, create an image that has become the logo of the National park. Of course, that’s when the cloud hasn’t decided to descend and cover them! When people first arrive they normally go down to the shoreline and this is what they will see.

This was taken in a dry spell as you can still walk out to the island. This is just a simple and straightforward shot of a pleasing view one October afternoon. Notice the clouds casting a shadow, shrouding the Screes on the right hand side. That is contradicted by the sunlit majesty of Yewbarrow to the left of image. Like us it has a light and dark side to its personality even on this lovely day.

As we move towards dusk the light shift swings around, illuminating The Screes and giving a complete contrast to the previous shot. Sometimes this glows a radiant orange and pink on The Screes but I don’t mind seeing it in its normal everyday ‘clothes’. As the light has now faded on Yewbarrow and Great Gable, it signals the end of the day and dusk sets in.

The winter months produce crisp air with clear light and are probably my favourite time of the year. Although you will hear me say that for the other three seasons! The autumn does produce images that are adorned with their special colours but the sunsets here do deliver vibrancy all year round. Well most of the time, so don’t shout at me if you arrive and it doesn’t come out to play ha ha. It happens.

Whilst it is spectacular when all The Screes are lit up, I particularly enjoy it when light ‘letterboxes’ across the fells. Just at the final throes, as the sun descends, fading light hits the top of Yewbarrow, cuts across Great Gable and Lingmell, before illuminating The Screes. The foreground will always be in shadow but that band of light in the background lifts the image. Not to mention the spirits when you witness it. I guarantee the hairs will stand on up on your head. (Or in my case the neck!)

Earlier on in the autumn, I took an image just to the side of the previous one but the cloud was heavy and the wind was a little stronger. You couldn’t see Great Gable but that didn’t matter as it would add to the mood of the shot. In order to capture what I was seeing, I decided to put the big stopper on to use the movement in the clouds to emphasize this.

The following two shots were taken on the same day but only a short time between capture.

It was late January, the tops were covered with snow and it was bitterly cold. I wear insulated wellies when I shoot on the shoreline and don gloves that allow the fingers to be exposed as and when I need them. This photograph reflects the cold and a little stopper has slowed the movement of the waves enough, accentuating the blue of the sky.

However, wait a while longer and the blue hour kicks in. This is the period of twilight early in the dawn each morning and late in the dusk each evening, when the Sun is at a significant depth below the horizon and when the residual, indirect sunlight takes on a predominantly blue shade.

Now it really looks as cold as it felt!

Patience. A virtue of the landscape photographer. The winter months requires less effort on my part to get out of bed for sunrise shots. I also get more sleep than I do in summer. Bonus! When I do venture out, I approach my work in the same way. Namely to shoot as much as possible in camera and whilst I do use grads of varying degrees, I am also a fan of the stoppers. They enhance specific style of images. Sunrises rarely disappoint unless the clag really comes down. You have to be prepared though as any light shows we are presented with seem to vanish as quickly as they arrive.

Whilst they use the phrase ‘The Golden Hour’ it is more like a twenty-minute window to capture the best of the changes. First light is always special. Being there as the light creeps over the land with its coat of many colours is always a sight worth getting out of bed for. Capturing it is even more special.

One of the fabled mountains or fells in this region is Great Gable. It is the one in the middle of the ‘logo’. I know where the sunrises here and whilst I never plan as such, it was my aim to get the first light kissing its slopes one day. I managed it. Winter was always going to be a better time as I knew it would light up the snowy outline more effectively.

At the point this was taken, light was beginning to break and the sun made its first proper appearance with rays hitting the outline of the fell. I used a longish exposure coupled with a little stopper that gave the water a ‘frozen’ look to compliment the snow covered mountain tops. Earlier, I had crunched my way across the icy landscape and ‘pitched’ myself waterside to ensure that I captured the ice that was present on the shoreline. Whilst creaking underfoot, the ice was around three inches thick but people reckoned it must have been twice that in order to stand my weight…

Although the dawn was just breaking there was a lovely orange glow in the sky outlining that famous triumvirate. I used the icy foreground to lead nicely towards it. In the spring of this year, I decided to pay ‘my office’ an evening visit. The day had been clear and I hoped that the sunset would be spectacular.

Remember what I said at the beginning of this piece? Undaunted, I set about photographing what I saw. Just as the light made its final drop, I knew that there wasn’t going to be a good show, so when it is like this I normally think ‘black and white’. People on my workshops hear me refer to a ‘black and white’ day when it is like this. Going flat but still worth the effort. A long exposure and a ‘stiffish’ wind ensured that I captured enough light to create a nice late evening moody shot.

Although the colour image looks OK, the B&W really pulls it off and creates more of an impact.

As the year and the seasons progress, I find myself drawn back to this location.

Here’s to the next time…

The FUJIFILM X-Pro2 boasts a Hybrid Viewfinder capable of instantly switching between optical and electronic finders, plus an updated image sensor and processor, which dramatically improve image quality. By combining these features with the ultra-high image quality of FUJINON X-Mount lenses and the color reproduction technology accumulated through more than 80 years as a photographic film manufacturer, the FUJIFILM X-Pro2 delivers the best ever results from an X-series camera.