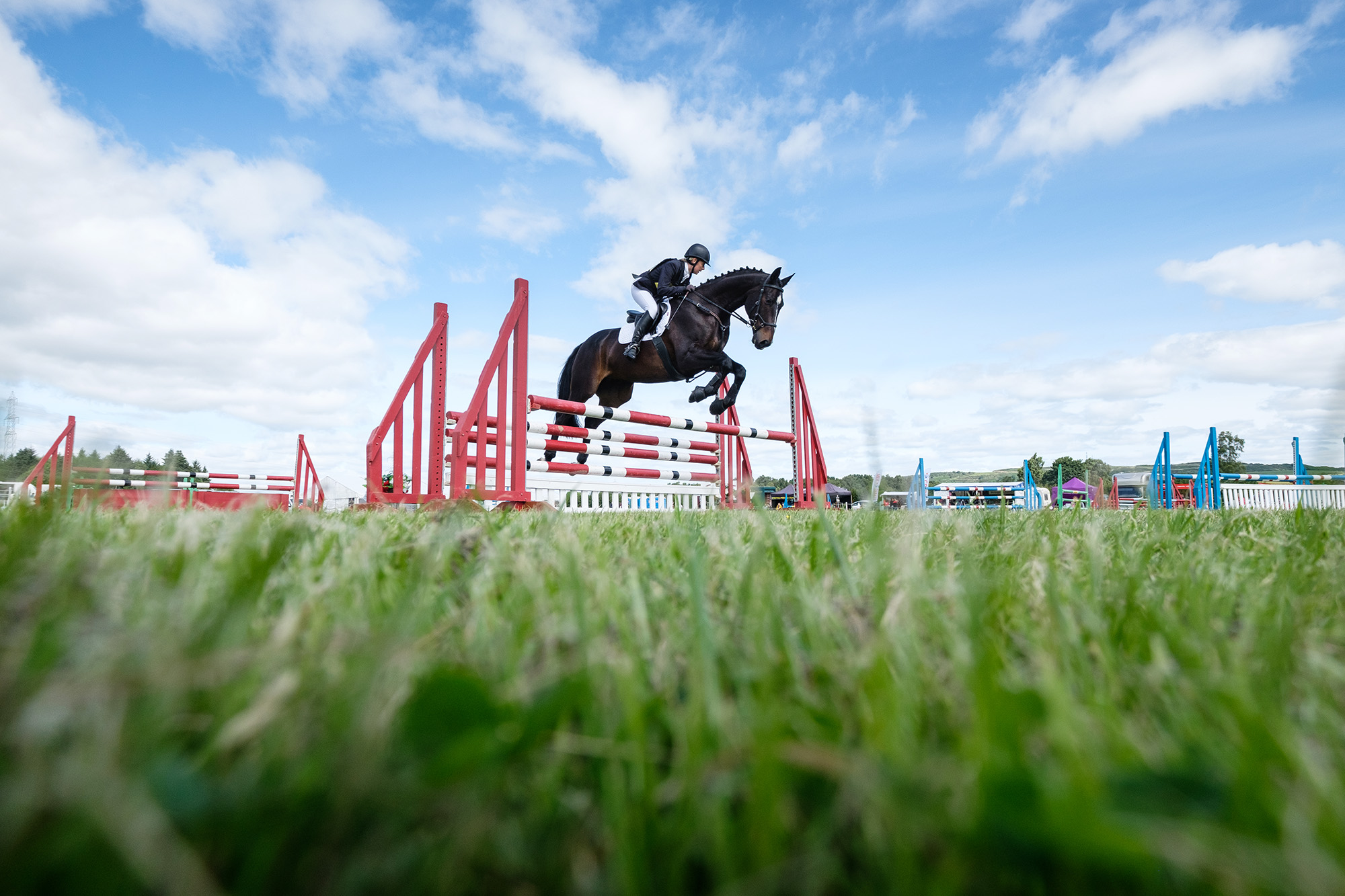 In a series of articles X Photographer Jeff Carter will be shooting at sports events in the UK and showing how to capture great images with the Fujifilm X Series without the need for a media pass.

Sports Photography as a Spectator – Eventing

Eventing is an equestrian sport that Great Britain excels at and even has royal participation with HRH Princess Anne and her daughter Zara Philips (now Zara Tindall) who were both medalists at international level, including the Olympic Games.

Eventing is unique in equestrian sport by combining dressage, cross country jumping over fixed fences and show jumping in one day of exciting activity.

Each of the three disciplines is designed to test the horses ability. Dressage shows how trainable the horse is and its basic paces in walk, trot and canter. The show jumping shows athleticism, control and accuracy, while the cross country tests stamina, speed, jumping and bravery.

The different disciplines are combined into one competition and is run on a cumulative penalty basis. The competitor with the least penalties at the end is the winner.

I traveled to Forgandenny in the Perthshire countryside to spend the day in the glorious sunshine and capture some images of all three disciplines that make up Eventing.

At Forgandenny I found that you can get very close to the fences, so even for action shots you can fill the frame with the XF50-140mm f2.8, the fast aperture coming in very useful for getting some great separation between the subject and the background.

I also used the XF100-400mm f4.5/5.6 as well to give a different perspective to my shots and allow me to stand further back while still filling the frame. I had the 1.4x and 2x converters in the camera bag but I didn’t need to use them at this event.

Another lens I used extensively at Forgandenny was the XF90mm f2. This is a lens I love using in the pitlane at a motorsport event but I don’t tend to use it trackside as it is not really long enough. However for this sport, because you can get close to the action, the XF90mm came into its own, especially when shooting at f2.

If you don’t have access to the XF50-140mm or the XF90mm f2 another lens to consider is the XF55-200mm f3.5/4.8. This lens is a great choice if your budget wont stretch to the more expensive options as the AF is very good and lens is as sharp as any other in the Fujinon XF lens range.

I also used the XF10-24mm f4 lens during the show jumping part of the day, which enabled me to get another different perspective.

Catering facilities are usually available but they can be expensive, so I would recommend taking a packed lunch and a bottle of water.

At Forgandenny for the Dressage and Show Jumping you must stay behind the ropes surrounding each arena. This isn’t as restrictive as it sounds because you are quite close to the two arenas.

You are free to move around the Cross Country course. There are ropes to give you a guide to where to stand but be aware of which fences are being used. There are three or four fences in each area with different coloured markers depending on which class is using the course. If you are not sure ask one of the officials, you will see their cars parked next to each fence they are judging at. You mustn’t block the view of the judges at each fence.

In the Show Jumping arena the backgrounds were very busy, with trade stalls, horse boxes and cars surrounding the area. I decided to get down low and shoot up towards the competitor as they jumped the fences close to the edge of the arena. This meant the backgrounds were cleaner and the perspective was also different from the images taken when standing up. I used both the XF90mm and the XF10-24mm for the low angle shots, using the FUJIFILM X-T2’s articulated LCD screen angled at 90 degrees so I could easily frame the shot.

The action is quite easy to follow in each of the disciplines. The Dressage is slow moving and takes place in a relatively small area. The competitors taking part in the Show Jumping and Cross Country follow a set course so once you know where the horse and rider will be heading it is easy to find a suitable position to shoot from.

The X-T2’s AF system is superb and will track the competitors easily. I set both of X-T2s to ‘boost’ to improve the reaction time. The AF-C custom setting is set to ignore obstacles (set 2) so the AF doesn’t get confused by objects such as fences or trees that come between me and the competitor as I follow them.

I found single point AF to be the most useful setting, using the focus point on the rider’s upper body.

With the aperture ring adjusted by my left hand, I can adjust all three elements to get the correct exposure without taking my eye from the viewfinder. With some horses being very dark brown and with some a light grey or white, I would adjust the exposure by +/- 2/3s depending on the colour of the horse to make sure I didn’t lose the details in the shadow areas in the bright sunlight.

At the water splash and in the show jumping arena I did experiment with slower shutter speeds down as low as 1/50 to give a lot of movement in the final image. Because the subject is moving across the frame but is also moving up and down as well the use of a slower shutter speed was very hit and miss but when it did work the effect was quite dramatic.

This was the first discipline of the day and photographically, because the riders are performing a set routine, the most difficult to shoot and convey any meaning to this part of the event. I shot the competitors on the turn so the horses legs were crossed, or from the side with the classic dressage pose of the horse and rider. I also framed some of the shots close in so there were only parts of the horse and rider in the frame.

The competitors then moved onto the show jumping phase. Catching the horse mid jump with the rider leaning over the horses neck is probably the most recognisable image. Shooting low to the ground gave a different perspective but also framing the image very tight using the XF100-400mm eliminated some of the busy background clutter that is was an issue during the show jumping.

The third and final discipline is probably the most recognisable part of the sport, cross country. The cross country phase took place on the hills above the show jumping and dressage arenas and gave sweeping panoramic views of the Perthshire countryside. It would have been very wrong not to include the vista in the background of some of the images.

As well as getting the tight shots of the competitors jumping the fences and traversing the water splash, it was also an opportunity to focus the lens on the grit and determination on the riders faces as they pushed their horse to the limit to get a fast time.

Do not use a flash gun as it can scare a horse. Unsurprisingly the use of flash is not permitted.

Eventing takes places all around the UK and dates and venues can be found on the British Eventing website.

As with all sports there are the big events such as Badminton, Burleigh and Blenheim that attract the star names from around the world and the access for spectators will be limited.

However there are some fantastic events where the professional riders will attend to bring new horses on and where the level of competition is just as fierce. The access for photographers at these events is less restrictive, such as I found at Forgandenny, and so there are more opportunities to get some great action shots.

Before travelling to an event it is worth contacting the organisers to check that spectators are allowed and if there is a cost. At Forgandenny there wasn’t a charge for entry or for parking your car.

Find out more about the FUJIFILM X Series cameras and Fujinon Lenses.

• Check the weather forecast and dress accordingly.
• Take covers for your cameras. The X-T2 / X-Pro2 / X-T1 and the majority of Fujinon lenses might be weather resistant but I always cover the equipment when not in use.
• Food and drink. There are usually facilities at an event but it is probably wise to take some food and at least a bottle of water.

• In the Dressage and Show Jumping Arenas stay behind the rope fence
• On the Cross Country course stay off the course that is being used. If in doubt ask an official.
• Obey the event officials at all times
• DO NOT USE FLASH
• When walking in the paddock, be careful of the horses. Do not make loud noises or use flash. Do not walk behind a horse, you might get kicked.