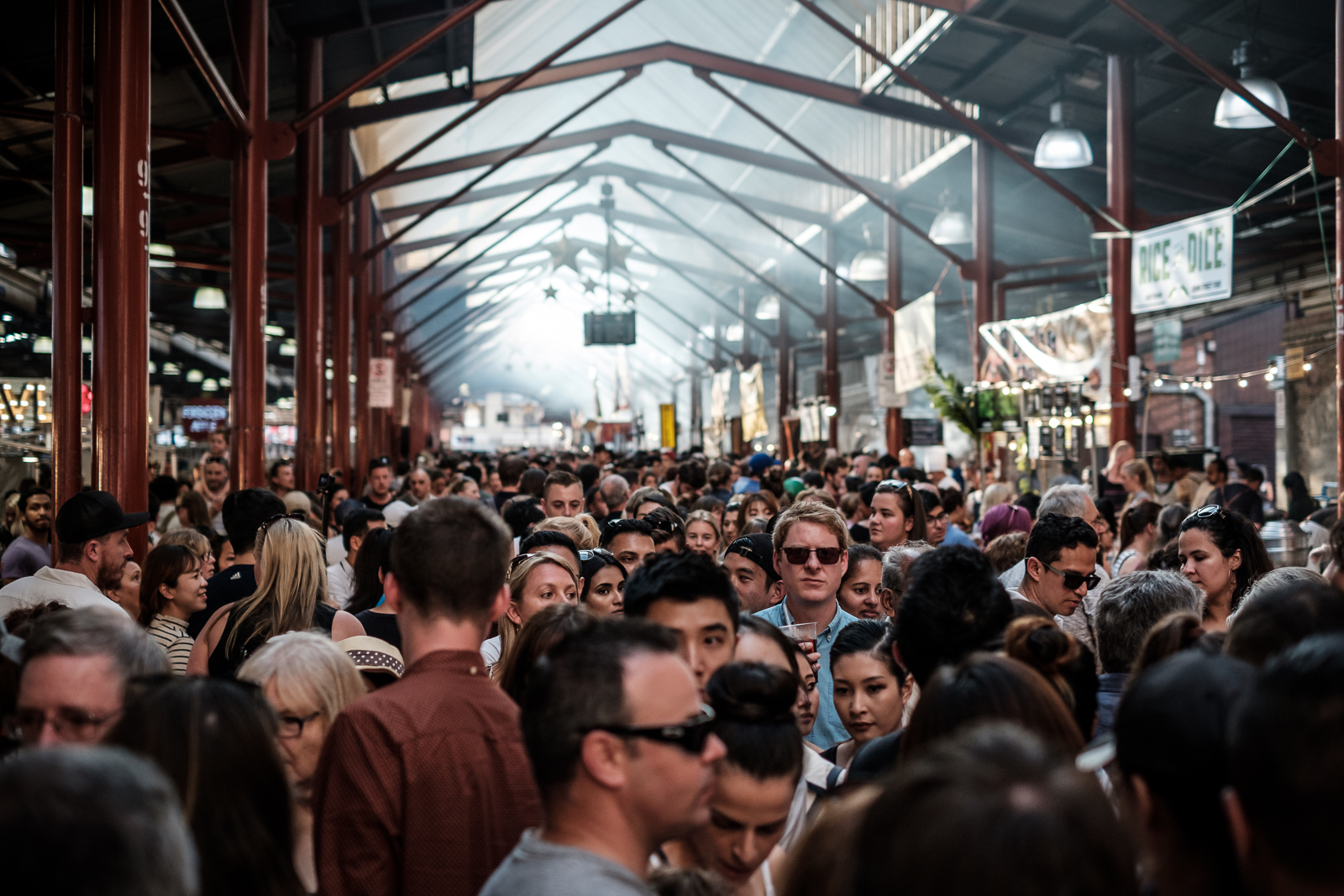 Welcome to the Second Series of Through a Photographer’s Eye. In this series, we continue to learn about Australian photographers and how they use X Series Cameras to photograph their world around them. Our fourth interview in Series Two is with Melbourne based photographer, Greg Cromie.

Greg, tell us a bit about your photography journey and how you ended up choosing street photography as your main genre?

I studied film photography in art school however once I graduated I did not pursue it any further.  It was 20 years later, in 2013, that I was encouraged to take up photography again. My wife had just passed away and I used street photography as a way to get out and face the world.  Through street photography I was able to see that the world and life went on. From behind the safety of my camera I captured life and love and happiness and every other emotion without feeling like it would swamp me in my raw state. A bit like snorkelling on a reef. I almost felt invisible and unaffected by what I was seeing. My street photography journey has been a tremendous part of dealing with my grief, reconnecting with the world and expressing myself through my images. It was, and still is, a form of therapy for me.

You mentioned you jumped from the X100 to the X-T1 and more recently to the Fujifilm X-T2. What made you want to upgrade your X Series camera?

When I picked up the original X100 I was instantly intrigued by the Fujifilm X Series. The image quality and the way that the Fujifilm X System renders images was just amazing and very unique. I prefer shooting with primes and having interchangeable lenses so it was not long before I sold all my DSLR gear and bought the Fujifilm X-T1 with the XF23mmF1.4 and the XF16mmF1.4. I loved the build quality of the Fujifilm X Series products. To have the manual controls so accessible on the camera allowed me complete creative control. It reminded me of my film photography days and the joy of creating a photo.

I took my Fujifilm X-T1 with me wherever I went – including two trips to Japan. It is such a compact and light kit that I could take my camera with a prime lens everywhere and hardly even notice it was in my bag. When the Fujifilm X-T2 launched I was quick to get my hands on one. Such a significant upgrade in capabilities from the X-T1 to the X-T2. The X-T1 had taught me the joy of controlling light and time to create images. The X-T2 has allowed me to master my photography and take it to the next level.

There’s a lot of emotion that unveils itself on the street, can you share the photo you’ve captured with the most impact and tell us a bit about what you were feeling when you captured it?

On my last trip to Japan, I took a Shinkansen from Kyoto to Hiroshima on the International Day of Peace. Such a humbling and highly emotional experience. On August 6, 1945, 80,000 people were immediately killed when the first deployed atomic weapon was unleashed by the United States. 6,000 degrees Celsius. 90 percent of the city destroyed. Tens of thousands later died due to radiation exposure and disease. Nothing like it had ever been experienced before nor since.

Converging on Hiroshima were school groups, survivors and the families of victims visiting the site to perhaps share in hope that the world never had to visit such devastation and loss again. This shot was taken outside the building now known as the Atomic Bomb Dome – the exact location over which the atomic bomb detonated. The building is a shell of twisted steel and even melted concrete and bricks. This class of students with their matching yellow hats were all listening attentively and respectfully to their teacher.  I could not understand what was being said but the implied lesson was clear.

I think my own personal experience with loss and grief was awoken that day as I could all too clearly understand losing so much. But I was equally encouraged by the composure of the Japanese people and their ability to endure the worst of the worst and still prosper.

What are the sorts of subjects you look for on the street and do you prefer a particular focal length to capture them?

I find my style of street photography to be an organic process. I prefer to capture images that tell some sort of story of the human experience. Where are we? What are the political and social considerations of the time and how does this subject interact with those? Is there tension or joy or stillness in the subject’s emotional experience? How are others impacting the scene or the experience of the subject? How is the subject impacting others? I will stroll though a location with camera in hand while my eyes scan the scene looking for the alignment of all these factors and much more. My preferred focal length for shooting street is 23mm. Something about this length allows me to capture a subject but also enough of the surrounding scene to suggest or tell the story.

What’s it like owning the F2 trinity? Which lens out of the three do you prefer to use and can you show us your favourite photo captured with it?

With the recent release of the XF50mmF2 I was able to complete the F2 trinity of Fujifilm lenses. I prefer to shoot with primes so now that I have the XF23mmF2, XF35mmF2 and the XF50mmF2 I feel like my street kit (and my travel kit) is complete. The 23mm gives me the subject within the scene and allows for both to tell the story. The 35mm allows me to isolate the subject more but still allow for background and foreground elements to play a small part.  The 50mm gives me greater reach to capture the subject in isolation. To pull the subject out of the scene without disrupting it.

With my X-T2 and these three lenses I can carry my kit in a messenger bag and hardly notice the weight. When paired with the X-T2 each of these lenses are sharp and super quick on the auto focus. Plus, this makes my whole kit weather resistant. My favourite of these three lenses changes as they are all exceptional lenses. At the moment my ‘new’ favourite is the XF50mmF2 probably because it is the newest and there is so much enjoyment to be had with a new focal length. I look forward to taking only the F2 trinity with me to Japan again later this year.

A lot of people seem to have a fear about how to use their new gear. I see a lot of questions appear on forums from new photographers saying that they have camera X and lens Y and they want advice on the best settings to shoot something straight forward. This is so unnecessary as unlike in the film days, digital cameras give us limitless opportunity for trial and error. Your only real obstacle is how long your battery will last or how much your SD card can hold.

Be brave and take lots and lots of photos. If you are using a camera like one from the Fujifilm X Series, then set the Aperture and ISO to A (Auto) and just experiment with the Shutter Speed manually for a day or two. At the end of your shoot review your images and take note of the ones that you love and the ones you hate. What settings did you use? The next day, just use ISO on manual to see how this changes your images. Carry your camera everywhere and shoot everything. Don’t be afraid to experiment with your camera. As long as there is a hint of light, you can make an image.

Your passion for street photography has recently taken you to Japan for a second time, how did you find photographing people on the streets compared to Australia? Did you prefer a particular lens over another?

I have always had an affinity with Japanese culture so to be able to travel there was a big item on my bucket list. The first trip was to Tokyo and I stayed in Shibuya. What a crazy and amazing experience that was. A very youth centric area in the heart of the biggest and most densely populated city on the planet. The second time I travelled to Osaka, Kyoto and Hiroshima.

Doing street photography in Japan is incredible. Such diverse cities with backdrops that range from hyper-futuristic ‘Bladerunner’ style scenes in Tokyo to the still and sacred spaces that house the traditional temples and shrines in Kyoto. One day I was photographing in Shibuya at the scramble crossing, where thousands of people cross a giant zebra-crossing every few minutes. The next I was in the Tsukiji Central Fish Market photographing fish mongers carving giant tuna. On both trips to Japan I took my X-T1 and predominantly used the XF16mmF1.4 and XF23mmF1.4 lenses. I swapped between these two quite a bit and on days or nights when it was raining I stuck with the XF16mmF1.4 due to its weather resistance. They are both very versatile lenses and can be used for street, landscape and architecture.

Based on your experience what would you like to see included on a future X Series camera?

When I first purchased the X-T1 I knew I was using such an incredible camera. The build quality, aesthetics, ergonomics and overall capabilities of the camera were amazing. My wish list for improvements was non-existent as the system was meeting all my needs at the time. Then the X-T2 was developed and Fujifilm managed to deliver a greater photography experience by adding features that I didn’t even know I wanted or needed. Superior sensor and processor, dual SD card slots and I find the AF toggle stick such a great addition for street photography. The quality and capabilities of this camera has also allowed me to start my own photography business and offer a broader range of photographic services. Conceptually an X-T3 could include improved battery durability and a performance boost system without the need for the additional battery grip to make it worthwhile. One of my favourite features of the Fujifilm X System is the film simulations. Further film simulations would be a fantastic addition.

To view more of Greg’s work visit his web landing page that links to all of his social media profiles.