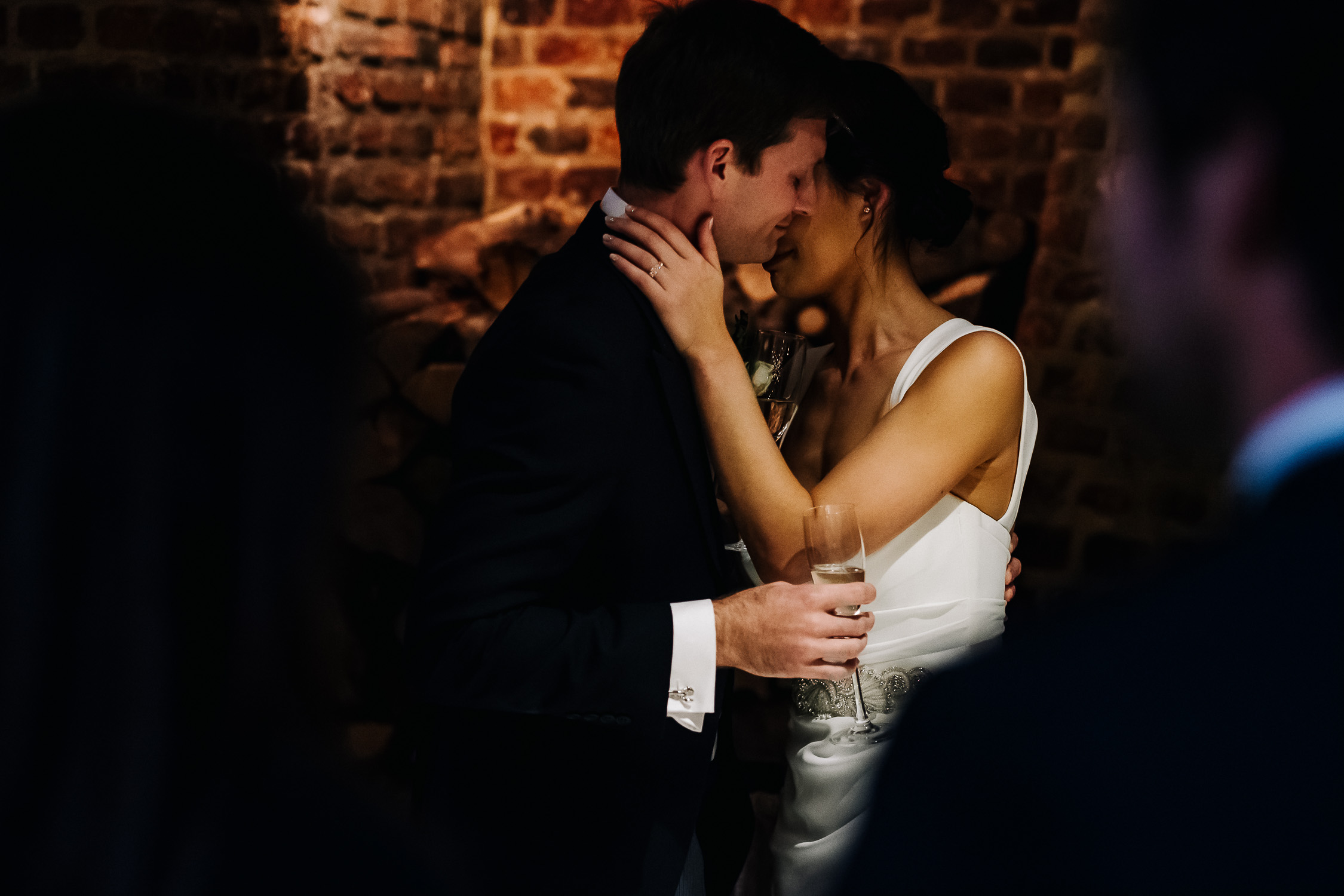 For the past seven years I’ve photographed weddings in an unobtrusive way, preferring the day’s event’s to unfold naturally in front of me rather than coordinating anything. This style has been derived from my love of documentary and street photography, which I shoot outside of weddings as much as possible. Doing so has given me a fresh perspective on the work I’m producing, and I often use what I’ve learnt shooting street photography with me on a wedding day. Here are ten things I’ve learnt about taking better wedding photographs, and how I applied them to a wedding I shot on the FUJIFILM XT-2 last month.

Where possible I’m always looking to frame my subject unconventionally. I had already shot the Bride from the more traditional angles but I wanted to create something slightly different. Once I went behind the table I could see that her face lined up perfectly with the gap in the mirror – it was then just a case of waiting for the make-up artists hand to fill that extra gap to complete the composition.

We have a tendency to shoot at our own eye level the majority of the time; doing this can mean we don’t always achieve the composition we’re aiming for, so to avoid that I use the LCD tilt-screen to get higher than my subject. In this instance I would have had to get a chair to shoot down onto the Bridesmaid, but raising my arms and tilting the screen down and using the ‘Live’ mode spared me from making a scene and potentially losing this natural moment.

We also have a tendency to photograph at a safe distance, and as Robert Capa once famously said, “If your pictures aren’t good enough, you’re not close enough”. Since using Fujifilm’s live-view LCD though, I’ve noticed I can get a lot closer into the action without invading people’s personal space. I tend to use this approach sparingly, so it’s more impactful when I do.

I love the bokeh effect you get when shooting at larger apertures, but you could be losing valuable story-telling information by doing this all the time. In this instance, when the Bride was putting on her wedding dress, I wanted her sister’s response to be more prominent, whilst keeping the main focus on the Bride. So I bumped the ISO up and set the aperture at f9. As a result you can just about make out the tear forming in the sister’s eye – information that would’ve have been completely lost had I shot at a large aperture.

5. Look out for the small moments away from the main action

A lot of the time when everyone is looking one way, something more telling is happening elsewhere. I had a feeling the Groom was going to have a look at his Bride during the readings as he couldn’t keep his eyes off her throughout the ceremony! I framed it so that you can just make out one of the readers, but with the focus and emphasis very much on the couple.

6. Use challenging lighting conditions to your advantage

I love using dark shadows and bright highlights to make a picture more dynamic. When everyone was walking in and taking their seat, I noticed this one shaft of bright light coming into the room. There wasn’t much else happening, so I decided to wait and see if anyone would come into that scene and sure enough one of the guests came and sat down in that spot.

The only time I stop shooting is when people are eating – they don’t make for the best pictures! But there are moments in between the courses when things are happening. It’s very common for the Bride and Groom to have a little wander around the room, going from table to table to say ‘Hi’ to the guests. I see this as a great opportunity to get some real, un-staged moments with their friends. I came across the Bride playing a drinking game with her old Uni mates, and stayed with them for a few minutes to capture the reactions.

8. Always keep one eye on the Bride and Groom

I’d say 9 times out of 10 there is a moment between the Bride and Groom after the Groom finishes his speech. Whilst everyone’s eyes are turned towards the Master of Ceremonies who is introducing the Best Man, my eyes remain fixed onto the happy couple to see if anything happens. If there is, you’re richly rewarded with a beautiful natural moment.

9. Use the ambient light

Unlike a lot of my fellow photographers, I tend not to use flash during the dancing part in the evening. I see it as adding an element that wasn’t originally there on the day, and my personal preference is for keeping the actual ambiance that was there originally. Plus when your subjects are lit by somebody’s actual flash from their camera, it adds a bit more of a story-telling element to the image.

10. Remember what it’s all about in the end

Ultimately, the most important aspects of the day are the human connections the couple has with the people they’ve invited to their wedding. A picture of the Bride hugging her Dad after having a laugh with him on the dance floor is going to be worth a hundred well composed, artistically interesting photos you’ll take for them on the day.