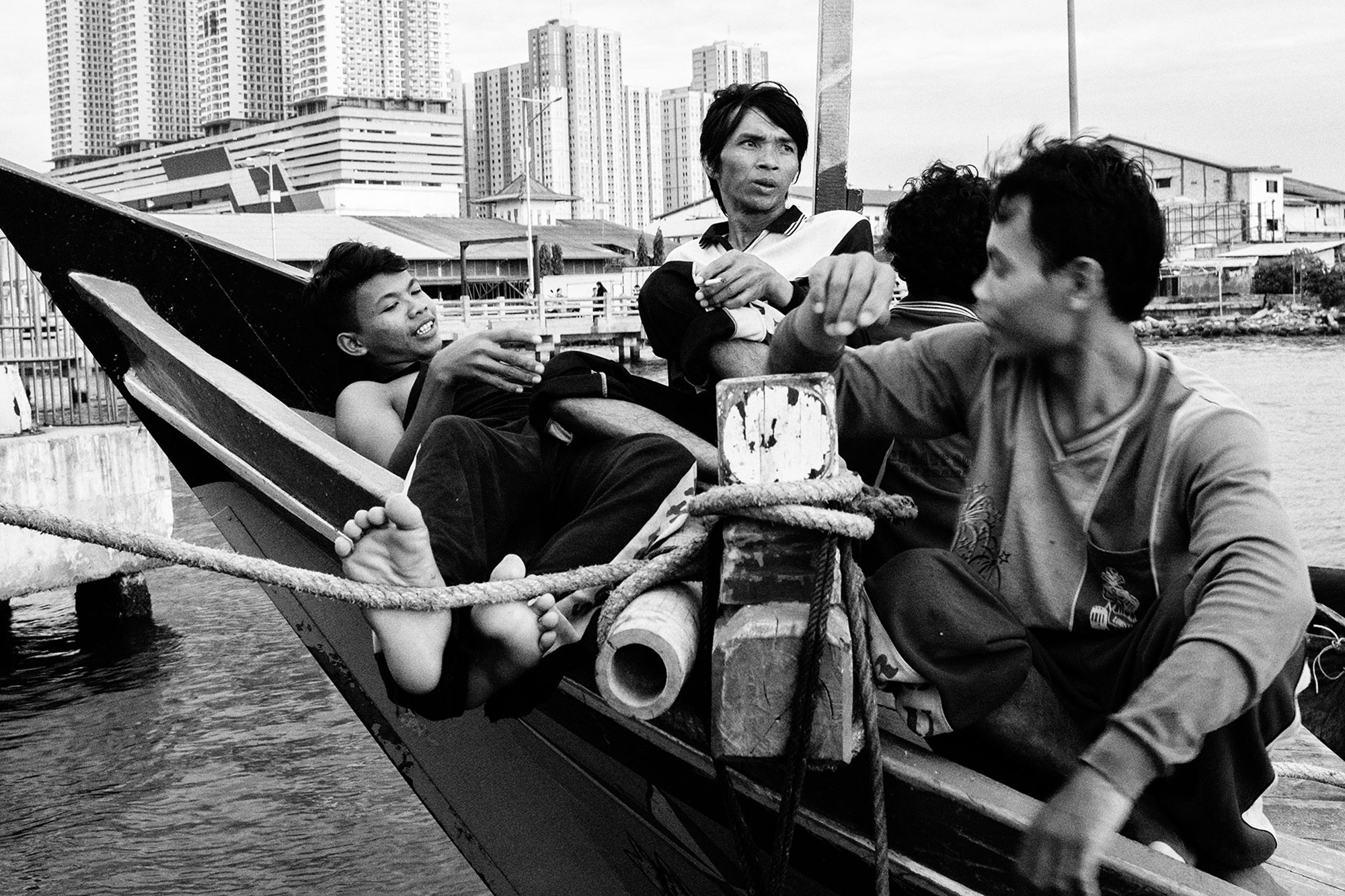 Through a photographer’s eye is the first in a series of interviews featuring Australian photographers. In each interview, we learn about the person behind the camera and how they use Fujifilm X Series cameras to photograph the world around them. Our seventh interview is with Melbourne based photographer Anirban Chatterjee.

Anirban, can you tell us about your journey of becoming a visual storyteller and how you became involved in photography?

I was very curious about photography in childhood. Both my dad and granddad were amateur photographers. As far as I remember, we always had a camera or two in our house. But in India in the 80s and 90s, the time when I was growing up, owning a camera was not very common. The camera was more of a family treasure than a tool of the trade. So, my time with the camera was very limited. The norm was I got to take one frame during an entire family vacation. I don’t think my dad could have handled his anxiety more than that. So, yes, I was curious more in a forbidden fruit kind of way than anything else.

Actual photography happened a bit late in my life. My first camera was a Kodak point and shoot which I bought in 2005 when I was living in London. It was my first time outside India, and I wanted to preserve my memories. Then in 2007, I moved to Thailand. This was the time when prosumer DSLRs were getting more mainstream. All my friends had a DSLR. They were all talking about stuff my simple point and shoot could never do. So, one day I went and bought a Pentax K10D. Yes, in a way, I bought my first DSLR because of peer pressure. And that’s pretty much how I got started in photography.

Between 2005 and 2012, I was living a nomadic life. Especially between 2007 and 2012, I lived in five countries and visited two more. When I started, my images were mostly of these new places, its culture, and people. I wanted to share stories about these new experiences with my parent back in India. I like to think of my Mom as my first editorial client. That’s how I started telling stories through my photography.

During this time, I was also fortunate to get published in a few global publications and was featured in the Pentax artist gallery. This led to a few actual client assignments which further pushed me to learn more about the craft, and to improve my skills.

In 2013 I moved to Australia. Soon after I became a dad, life took over, and photography moved to the bottom of the priority list. In hindsight, I think the time off was a great thing to happen. I got the time to think about where I wanted to be with my life, reset my priorities and what photography meant to me as a person.

My passion continues to be a visual storyteller and photography will always be my chosen medium. I think with time, and from experience, I have finally found the way.

Though I started doing photography almost 10 years back, it has only been a year or so that I feel I have become a photographer.

Having shot exclusively on the Fujifilm X-T1 and X100T since 2013, can you explain how X Series equipment has helped your photography style?

It may sound a bit odd, but I want my camera to do most of the heavy lifting for me. For me, that’s the reason technology exists. Carl Mydans once said that sophisticated equipment simply “frees all of us from the tyranny of technique and enables us to turn to what photography is all about – creating a picture”. And X Series cameras allow me to do just that.

The beauty of X-Series camera is the common design principles they all share. My main gear for my client work is X-T1, but I also use my X100T when required. For me, it is another body with XF23mmF2 lens. This is where the common design principle helps. Both the cameras work the same way, the menu options which I use are common, the dials and knobs are almost at the same place. I set up both the cameras in the same way, and the entire process feels very seamless.

Not only are the cameras are similar, but the files they produce are also identical. I rely heavily on automation and like to trust my camera. I am always on Aperture Priority; I set WB to auto, the meter is set to Multi, ISO is always set to 6400, and I use the Chrome Film Simulation almost all the time. That’s what I meant by a camera doing the heavy lifting for me. They also react to post processing the same way and even looks the same when I convert them to monochrome. This makes the entire post-processing workflow very simple and fast.

I think to put it in simple terms; it has made my photographic process very simple and intuitive.

You recently travelled to Jakarta with Fujifilm X Series equipment, did you have a particular lens setup you preferred to photography with?

I prefer the 23mm focal length on a crop sensor. It gives a 35mm equivalent field of view which suits my street/documentary style of shooting. Being a wide angle lens, it also adds a sense of depth in the images, which I love.

X100T gives all these in a very small form factor. Add to that a leaf shutter with an inbuilt ND filter. Though I have not used flash on my recent trip, but I have done it before. And it eliminates the need to carry multiple ND filters as well as the limitations of sync speed.
It checks all the boxes for me, and it is my go-to setup for travelling.

Definitely. There is a huge difference.

The biggest difference is the way you compose. Photography is an art of elimination. You are always looking for elements to eliminate from the frame to make a stronger image. In places like India, China, Indonesia, and Japan it is very difficult to do that especially when you are used to photographing in a place like Australia.

In Australia, when you are on the streets you are dealing with limited variables. You focus on one or two things. You know the way people interact and behave so it is easier for you to predict and you can pre-visualise things, but in places like Tokyo, Shanghai or Jakarta, with a higher population density, it is very easy to get overwhelmed.

The population of greater Jakarta region itself is more than that of entire Australia. The first time I went out on the streets, I was simply overwhelmed. There were so many people within the frame. Add to that you have other visual elements to deal with. There are more colours on the street, the quality of light is different, just too many variables to consider which takes some time to get used to.

I grew up in India and lived in the South East and East Asia region for almost 5 years. I knew what to expect but still got overwhelmed when I went. It takes a huge shift in the way you react to all those visual cues, to process the information, and make the image.

Have fun and enjoy. You can be the most technically gifted photographer, but if you are not having fun or enjoying the process, your images will be boring.

And if you are starting to do photography on the street, please be respectful to others. In Australia, it is perfectly legal to do photography in public places, but that doesn’t give you a licence to be a nuisance. As much as we have the right to take photographs in public places, the other person also has a right to walk on the street minding their own business. We live in a community, and respect must be mutual. An image is not worth it if it ruins someone’s day. So please be respectful.

In a recent project featured on your website you explored the concept of identity among humans, can you explain the settings you used on your X100T to help portray the subject?

F4 and ISO 6400. Shutter speed was between 1/6th and 1/10th of a second. I used aperture priority mode, so shutter speed was pretty much what the camera decided. Since, I was shooting at the exact same location, standing almost near the same spot and at about the same time of the day, I knew the shutter speed wouldn’t vary that much. Also, I wanted the camera to adjust to the random changes in light from vehicles passing by. Like I said, I want my cameras to do the heavy lifting for me.

Overall based on your experience, how did you find travelling exclusively with the Fujifilm X100T to document all your travels? Were there any advantages or disadvantages?

For my style of shooting, I think it is as good as it can get. To me, the versatility of a 35mm equivalent lens in a small form factor is its biggest advantage.

I don’t think there are any disadvantages as such. In the end, it comes down to individual preferences and style of shooting. For travelling, landscape photographers only having a fixed prime can be limiting. Also, different people see the world in a different way. If one sees things in ‘telephoto way’ i.e. prefers to isolate subjects or to include minimal elements within the frame, this camera may create some creative constraints. For beginners and people who are a generalist, I feel a camera with XF18-135mm lens is a much better option.

Do you have any more projects you are planning that we should look out for and where should people go to see more of your work?

I am very passionate about the concept of Human identity. So far, I feel I have just scratched the surface, so I will definitely be exploring the theme more in depth. I am also planning to do a few more projects specific to Australia. I think there are many stories in this country still being untold. It is my way of learning more about my adopted country and fellow people.

I try to update my Instagram and Facebook feed regularly with my latest work and projects. And to see my current work, you can go to my website.

3 comments on “Through a Photographer’s Eye: Anirban Chatterjee”