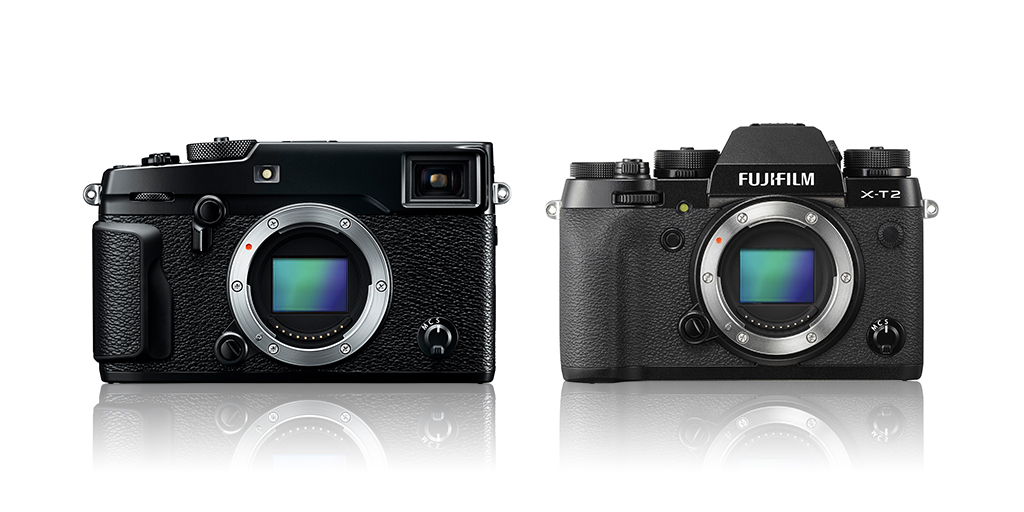 Great news for Fujifilm X-T2 and X-Pro2 owners. Thanks to two new firmware upgrades – one at the end of this month, the other by the end of May, your cameras are about to get even better!

This latest round of upgrades further underline our ‘kaizen’ philosophy of continuous product development and rather than package these in a new model (like some manufacturers) we’d rather make them available to you immediately, free of charge. We’re nice like that.

A total of 33 functional and operational changes will be made over the two upgrades. Some apply to both our flagship models, whereas others are model specific. Either way, we know that you will welcome the updates, which will boost your user experience even further. Once released, you’ll be able to download the firmware upgrade HERE. Read on to find out the delights that await on X-T2 version 2.00 and X-Pro2 version 3.00, which will be available by the end of this month…

Changes to both models

The new firmware upgrades extend a range of existing features to provide additional versatility. The ability to shoot in the RAW file format, for example, is extended to all Bracketing functions, not simply AE Bracketing, plus RAW can also be used when shooting with the Advanced Filter modes. Extendable ISOs will now include ISO125 and ISO160 settings while the longest exposure selectable in the T mode is increased from 30 seconds to 15 minutes. An AUTO option has also been added for the minimum shutter speed setting when you’re shooting using an ISO Auto setting. With this option selected, the X-T2 and X-Pro2 will automatically select a minimum shutter speed based on the focal length of the lens in use.

AF performance in both models is already impressive, but these updates make it even better. Face Detection AF is faster and moving subjects are easier to track thanks to reduced focus hunting in the AF-C mode. If you want pin-point focusing accuracy while using Single Point AF, the additional of an even smaller focusing point will be welcomed, while manual focusers will no doubt be pleased to see the ability to move the position of the focus frame during enlargement; a feature which is now also available in the AF-S mode.
If you’re more of a videographer, re-focusing can now be done during movie recording either through a half press of the shutter release, or by pressing the assigned AF-On button.

Ever been frustrated that you can either have the Eye Sensor operational, or the LCD, but not both? Well, be frustrated no more as the Eye Sensor + LCD Image Display option changes that, so both models now operate like a DSLR. Equally, you can now turn off the Shoot Without Card mode so there’s no danger of taking images without an SD card inserted.
Picking up from the GFX 50S, the updates enable you to add copyright information in the EXIF data, plus there’s also the ability to record a 30-second Voice Memo in the Playback mode. Those who like to bracket, meanwhile, will enjoy the extended AE Bracketing from the existing three frames at +/-2 EV to nine frames at +/-3 EV, while custom function fans can now name all seven Custom Function settings.

Changes to X-T2 only

Already available on the X-Pro2, the version 2.00 upgrade will see the X-T2 gain the functionality to turn off the ability to change the shutter speed using the Command Dial; thus avoiding unwanted adjustments. If you are a Command Dial fan, however, the upgrade will also now allow you to set the full ISO range (including extended options) using the Front Command Dial.

Already proving popular with film-makers, the firmware update will see the X-T2 gain some extra video functionality. It will, for example, allow the Eye Sensor to be used during video capture, plus it is be possible to change ISO sensitivity during recording.

A live histogram can also be viewed on the rear LCD to help ensure exposure accuracy during recording plus external microphone input levels have been optimised with the lower limit changed from -12dB to 20dB, which reduces white noise when an external microphone with preamp is connected.

If you find yourself regularly switching between portrait and landscape orientation, the new Portrait/Landscape AF Mode Switching option allows you to pick a different AF mode and AF point settings according to the camera’s orientation. Similarly, when holding the camera in portrait orientation, the information on the rear LCD will also now switch accordingly, mirroring what it does in the viewfinder.

Finally, if you like to manual focus using the Dual mode where the focusing point is enlarged on the rear LCD, you’ll know that this enlarged portion disappears when the shutter release button is half pressed. Not any more! The small window is now constantly on.

Changes to X-Pro2 only

The version 3.00 update boasts two autofocus additions: the option to have the AF points constantly displayed during Zone AF and Wide/Tracking modes and the five selectable AF-C custom presets from the X-T20 for more accurate focusing on moving subjects. Coupled to this, the EVF display’s time lag has also been reduced in the AF-C mode.

Additional firmware updates – version 2.10 for the X-T2 and version 3.10 for the X-Pro2 – will follow at the end of May. Two of the upgrades apply to both models, while a further four are unique to the X-T2.

Changes to both models

The update will enable you to assign a specific function to the Rear Command, which is activated when the dial is pressed in. Also added are -6 and -7 settings on the EVF’s brightness settings for easier composition in very low lighting conditions.

Changes to X-T2 only

From the end of May, the X-T2 will support tethering via Wi-Fi and will also enable you to switch the main and sub displays on the Dual Display mode when manual focusing. The update will also afford extra functionality in the Shutter AF and Shutter AE options, allowing you to specific different settings according to the AF mode. A new ‘All’ option will also be added in the AF mode so you can select both AF mode and Focus Area size using the Command Dial.

So there you have it, full details of the forthcoming firmware updates and how they will improve both the X-T2 and X-Pro2. We hope you enjoy the upgrades and that the cameras continue to help you achieve your photographic vision.