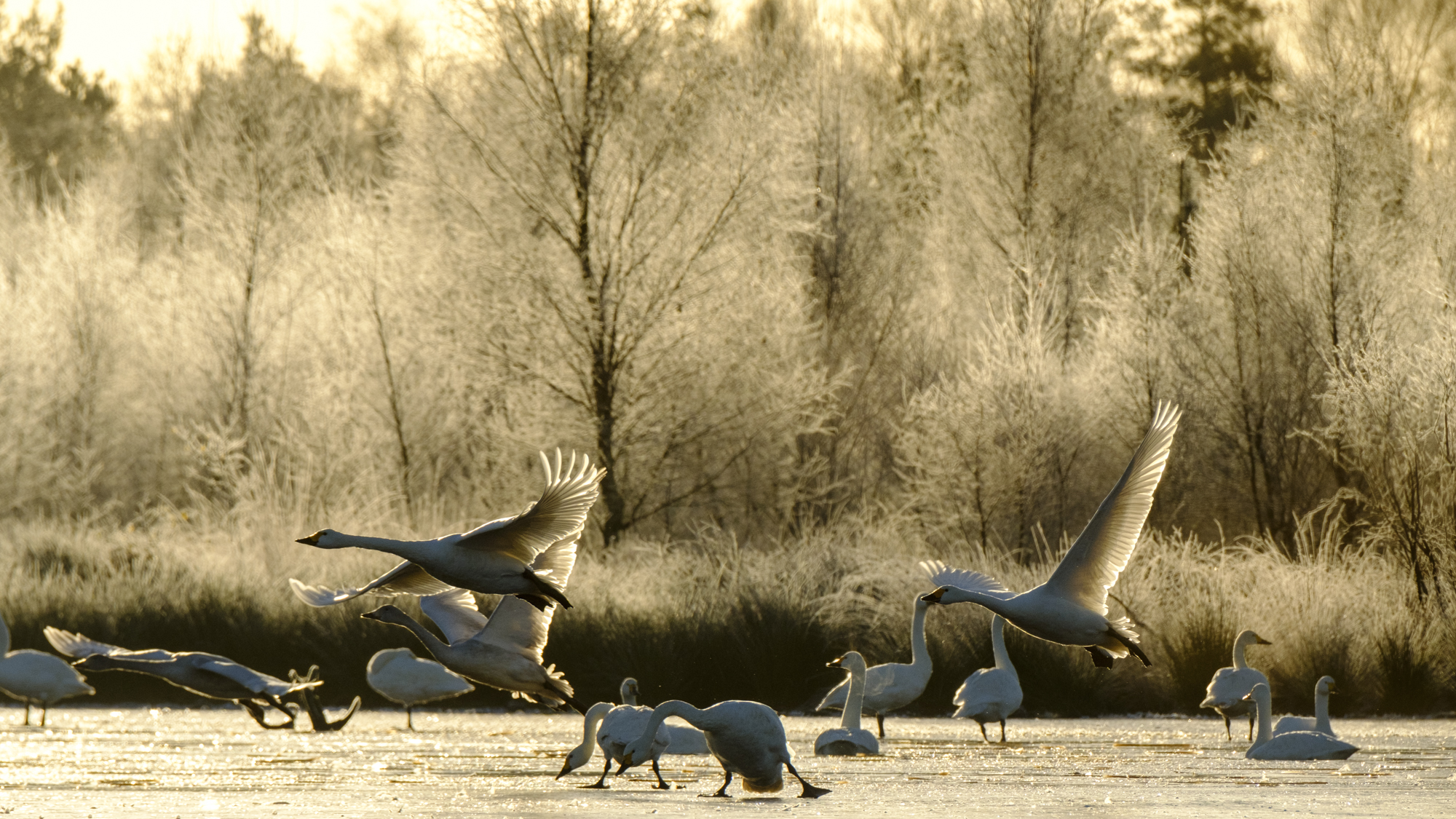 Recap – My name is Ben Cherry, I’m a Fujifilm X-Photographer focusing on environmental photojournalism. Currently I am part of the WWT Flight of the Swans conservation project, where Sacha Dench is flying from Arctic Russia back to the UK; following the declining Bewick’s swan as they migrate to overwinter in warmer climates.

You can find the first blog explaining how I got involved in this unique project and what I’ve brought along with me here.

While the second installment, talking about incredible Russia can be found here.

Well we eventually got out of Russia, after a 19 hour border crossing. Estonia was instantly different. It had a significantly different feel to it, from seemingly greener, richer forest to just a different culture. It was all quite refreshing!

I broke off from the core team to focus on finding swans. We had been given some tips for where to search around the northern coastline. However, a spanner was thrown into the works in the form of Charlotte, one of our tagged swans. Incredibly excited to be remotely near her we headed to the remote lake she was roosting at. Turned out to be quite the endeavour, with a choice between a 10km walk through thick woodland or a 2km trudge through a peat bog (which thanks to google translate and an excitable colleague, we thought it was a mine field for about half an hour!). We opted for the bog.

I had an Indiana Jones moment almost as soon as I got into the peat bog. Weighed down by two large video tripods and a full backpack I quickly sank into the peat and couldn’t wiggle out! Eventually, with a helping hand to take all of the kit, I managed to wiggle out. Though my boots did pay the price. I marched off to an outdoors shop as soon as we passed through Tallin and picked up some wellies! Needless to say our luck didn’t change and we didn’t find Charlotte. However, returning to the coast we came across these feeding swans in a field (above).

The coastline offered more promise as we came across a spot where we could stay hidden within coastal woodland as the Bewick’s fed relatively close to shore. This was huge progress for us, where 200m distance was previously deemed an excellent sighting. I was regularly having to use the XF100-400mm with the 2x teleconverter to get something remotely useable.

Soon enough though it was time to move on. We were clutching at feathers trying to locate one of our six tagged swans. Charlotte had moved to an island off the coast of Estonia. There was very little hope of it paying off but we couldn’t not try! We boarded a ferry and set to on our wild swan chase.

Our crazy idea paid off as Charlotte stuck around with a good number of other Bewick’s in the area. We were able to film and photograph her! A big step forward for the project.

Almost as soon as we got to the island it was time for us to leave as we needed to catch up with the team as well as completing some filming in Latvia and Lithuania.

One of our projects was to meet and highlight the amazing efforts of individuals and organisations all along the flyway of the swans. Like Jaak and Dmitrijs Boiko who are both dedicated conservationists, here they were both releasing ringed birds.

As we continued through the Baltics we were lucky enough to get more and more wildlife encounters, from dangerous but illusive moose, to red deer, foxes and of course migrating birds. However, the weather had caught up with us and we were engulfed by a blizzard, leaving a heavy blanket of snow.

Bad news – We were informed that Charlotte still hadn’t moved and that WWT Scientists were concerned about her so we were asked if we could go back to the island. We did and the scene had changed dramatically over those ten days, from a classically autumnal scene to harsh winter conditions which we couldn’t stand for longer than an hour at a time. With limited visibility, a thick layer of snow and over ten metres of coastal ice, we had no hope of finding dear Charlotte. Only mute swans remained. It was a bleak and tragic scene highlighting the need to migrate. I was having to film this so unfortunately have limited pictures.

The swan search continued. The team was together again, well for a day at least. I was sent ahead of the team to cover an important hunting conference in Denmark. This was a fascinating conference and I was incredibly grateful for this responsibility. A small section was quickly edited into a video (while on the road) discussing lead shot in shotguns for our Facebook page (hence the average quality instead of wonderful 6K!).

Poland was a magical place on the fringe of winter, as frost, ice, snow and birds continued to push westwards.

So much of the project has been about local knowledge, finding contacts who are dedicated to Bewick’s and wetland conservation. We were given a tipoff about a lake in rural Germany which supposedly had a thousand Bewick’s on it. Unfortunately this was not the first time we had heard this so we approached it without getting too excited…

The next few days were amazing, camping lakeside, getting up at 5am and sneaking into our hides without disturbing the swans, but most importantly the thousands of twitchy bean geese also roosting on the lake. The waiting was long, and the cold was numbing to the core, but it was definitely worth it!

Sacha’s final challenge was to cross the channel – the first time a woman has crossed the channel by paramotor. With a dry suit and water floats attached to her paramotor (middle image) she got on her way from Calais to Dover. The portrait of Sacha with her helmet is a prime example of why I brought my FUJIFILM X100T along. It is fantastic for lit environmental portraits. Using an off camera flash with a collapsible beauty dish at ISO400 F5.6 1/2000 against the bright midday sun.

She did it and after a week or so of travelling back to WWT Slimbridge in Gloucestershire, Sacha’s journey came to an end. This incredible three month expedition raised awareness of the plight of Bewick’s and wetlands throughout Europe. But more than that it highlighted the commitment and passion of conservationists along the flyway. This project has started conversations, completed a petition and brought conservation groups and governments together, all along the Bewick’s flight path. Together we will make a difference, #TogetherWeFly.

3 comments on “Flight of The Swans – Final Chapter”