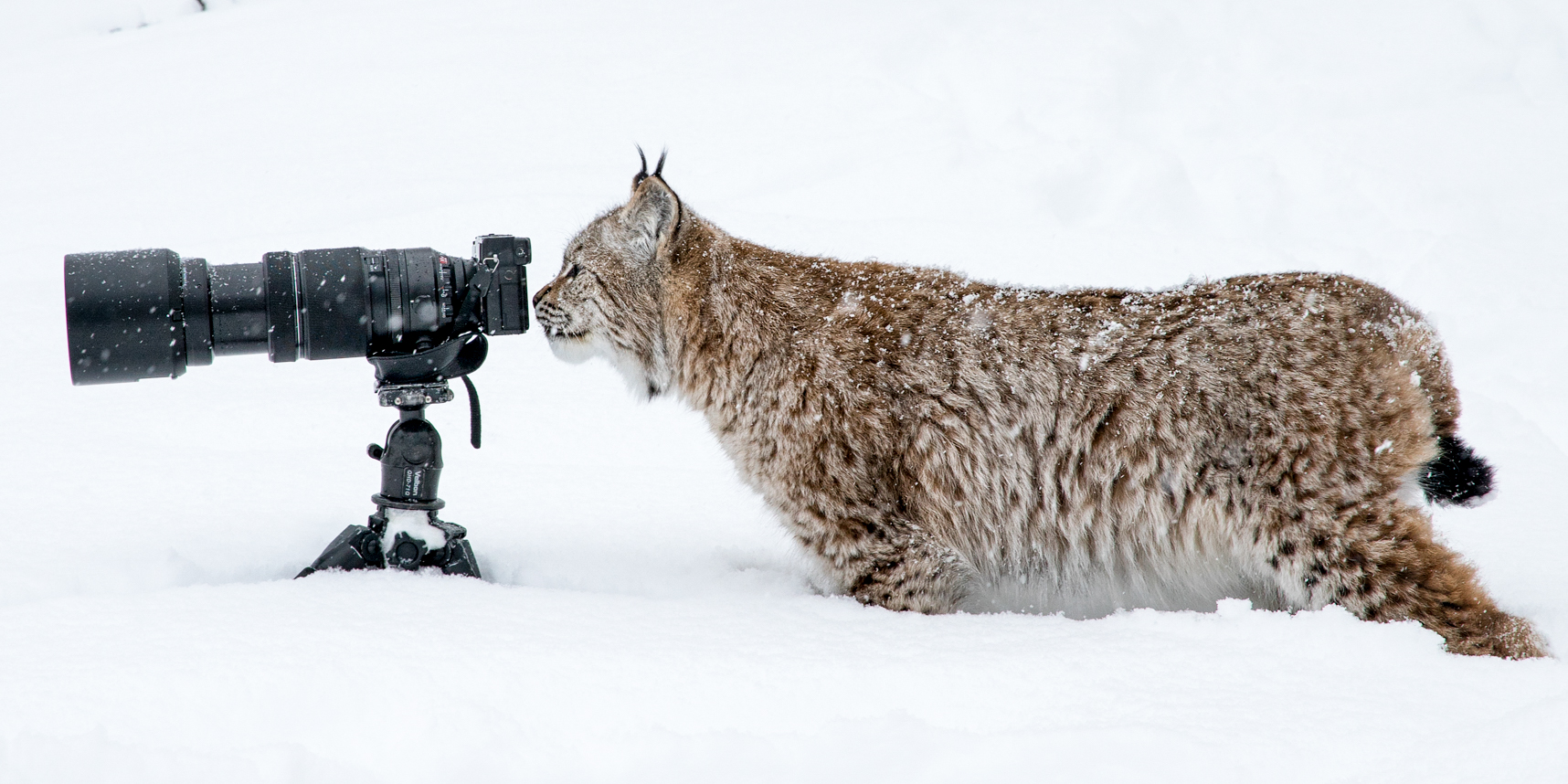 I am a documentary photographer who works with animals in the natural world, and my environments are often extreme. If not remote Arctic regions, I’m in expeditions in tropical jungles or high elevations. Being able to pack light is crucial. When working on a mountain top, skiing alongside dogsleds, or walking for days, my tent and everything else I need for living in the field goes into the big pack on my back. So my camera equipment, by necessity, is in a small bag around my neck. You simply don’t get good shots from your backpack!

Equipment size and weight are critical considerations for my work – when I first packed the X-Pro2 for a three week field trip to Svalbard in March 2016, it was true love.

These are both highly anticipated sequels of already very popular cameras.

The X-Pro2 was made for street photography and similar, the X-T2 as a good all rounder. I have used the former since March 2016, and participated in the testing of the latter when Fujifilm released the pre-production models to some photographers in April 2016.

Much has been said about these cameras, through lab tests and personal tests, but most users are photographers who shoot in urban environments. I use these cameras in somewhat different surroundings: in northern Norway, with its peculiar, capricious climate, and spectacular light. Polar night and midnight sun. Here, weathersealing is tested to the max!

I am particularly impressed with the X-T2 and X-Pro2 in several dog sledding and snowmobile expeditions in the high Arctic: Spitsbergen, Svalbard, 78 degrees north. The reference temperatures from Fujifilm’s test lab don’t exactly apply here!

Here is what I’ve experienced with Fujifilm cameras in the deep freeze.

Both these cameras are impeccable in all types of weather. Last week I worked with the Nordic Lynx (mountain cats) in heavy rain, without any plastic covers. All I needed handy was a dry microfiber cloth for the lens front: Wipe and shoot, wipe and shoot!

I LOVE that all the cameras’ basic adjustments are easily accessible on the top plate and with the aperture ring on the lens. No small nonsense buttons or menus to mess around with – this is crucial when working in the Arctic with thick gloves or mittens. Everything I need for the immediacy of making images is on the body: aperture, shutter, ISO and exposure compensation.

However, I did find that with the X-Pro2 turned on, I would occasionally bump the buttons on the back, especially in the cold where I wear a lot of clothing. I have unwittingly changed settings while moving around with the camera over my shoulder, which can be rather confusing when taking it up to use afterwards!

On the X-T2, Fujifilm has added lockable dials which keeps my settings securely in place.

I find the top dials a bit low on the X-Pro2. Fujifilm fixed this with the X-T2 though – its dials are higher and easier to grip. This is particularly important to Arctic freaks like me who shoot with thick gloves on. Fujifilm has also put the movie, metering and other functions into a lower ring under one of the top dials.

On both cameras the focus and metering are absolutely insane! I have never experienced anything like it before. It focuses even in heavy blizzards, and works the same way when using the 1.4x converter.

Some camera systems “shut down” in extreme cold, or are reduced functionally.

This has not happened with the X-series cameras.

The challenge however, is battery capacity. Driving at a good speed on snowmobile increases chill factor, turning minus 20 degrees C to minus 60 degrees C – THAT eats batteries!

In fully electronic cameras like these two, batteries are a challenge. Sometimes, solar charging stations are an option, but I often have to work for several days without being able to charge my batteries.

So I have batteries, many batteries. And I use them with care. Batteries to be used must be kept warm. The batteries I think I’m going to use during the day, I keep in the pockets close to my body. My winter pants are high with braces and additional pockets on the stomach, which is kept warm close to my stomach, well hidden and isolated by the sweater and jacket. This is where the rest of the expected day’s consumption of batteries are kept warm.

The batteries that I don’t intend to use that day, I keep frozen in my big backpack.

When batteries are not in use, they keep their charge when frozen. If a battery is empty in the cold, I replace it with a new one. But the used one I put in my left pocket to ‘reheat’ it. When it is heated, I can put it in the camera again, and get decent amount of power out of it. This may well be repeated two to three times before it is completely empty.

Cold traps moisture in camera bodies and lenses. Once I leave civilization on a winter expedition, the camera bag NEVER comes into my tent or cabin. Bringing cold camera gear into warmth means that condensation will immediately cover surfaces and particularly, lens elements. Moisture that builds up inside lenses does not evaporate easily. Once the camera is back out in the cold, this moisture freezes and optics turn into ice blocks, and are unusable for the rest of the trip.

The cold is dry, and both cameras tolerate it exceptionally well. So I often put my camera bag in a waterproof sack outside the tent – securing it to something solid so it won’t blow away if there is a storm during the night – in the cold outer corridor of the cabin, cargo crates on the snowmobile or dog sled. But NEVER into the warm room.

You can´t get away from this topic with a mirrorless system. And it is a challenge in the field. I’ve learned to shelter the camera from the wind when I change lenses, so it doesn’t blow straight in. I keep the housing close to my body, back against the wind with the lens down, and change fast to limit any dust entering. The best is of course to have two bodies.

Threeway tilt screen on the X-T2

Love it! Absolutely invaluable for landscape and documentary. Never has it been easier to go so low with super wide angles in the terrain!

JPEG files that come straight out of the camera are of very high quality. Of course I shoot in RAW, but it’s okay to save JPEG simultaneously for quick use on social media when there is internet connection. The Fujifilm Camera Remote app for smartphones and the cameras’ built-in wifi is brilliantly simple to use, allowing me to post photos instantly, rather than wait weeks to get home and edit the raw files.

When it comes to lenses, I mostly use these:

In addition, I sometimes use a 1.4x converter.

Polar bears and landscapes are at the top my of list, so I had high expectations for the XF100-400mm. With the 1.4x converter, it gives me 600-800mm full frame equivalent focal length, something I never had previously. It was so small and light that it went in standard bag.

But what a fulfillment of expectations! The autofocus surpassed them all. I have never experienced such accurate AF before. The rapid location of the focal point with the rear thumb joystick was a pleasure, and especially important when working with animals that move and change direction quickly. The long focal length allowed me to be far enough away from the animals that they were aware of me without being disturbed.

This was especially important in the period where ring seals were born on the ice. The newborn seals can´t swim, so they are very vulnerable if the mother is scared away. I came across several that could only have been a few hours old. They were aware of my presence, but I was far enough away to not be considered a threat. A few minutes after I arrived, the seal pup lay down to drink the milk of the mother. They had accepted me, and I got close-up images from a good distance away.

I print a lot of my work, so I was excited to see how it the crop factor files from the X-series would compare with my older full frame files in print. I typically make prints around 50x60cm to 60x90cm, and could not see any difference between the old and new.

Both cameras are sturdy, good looking workhorses which can withstand rough treatment in the field. One of the more serious incidents I experienced was a solid dogsled turnover going downhill on glacial moraine, where I was dragged several meters after the sled, with cameras underneath me. I thought there would be some serious damage to the cameras, but they were fine! I have slipped on ice and fallen with the cameras several times, but they tolerate A LOT of beating.

I bought my first SLR system back in 1991, and have used it continually since. But a change has come. At this point, I have had X-series equipment for a while, and have been able to test the gear under different conditions and all types of shooting.

Am I going to go back to the heavy and old-fashioned system?

I know what I will bring with me on the many exciting adventures to come: Of course Fujifilm will continue with me on these journeys! ☺