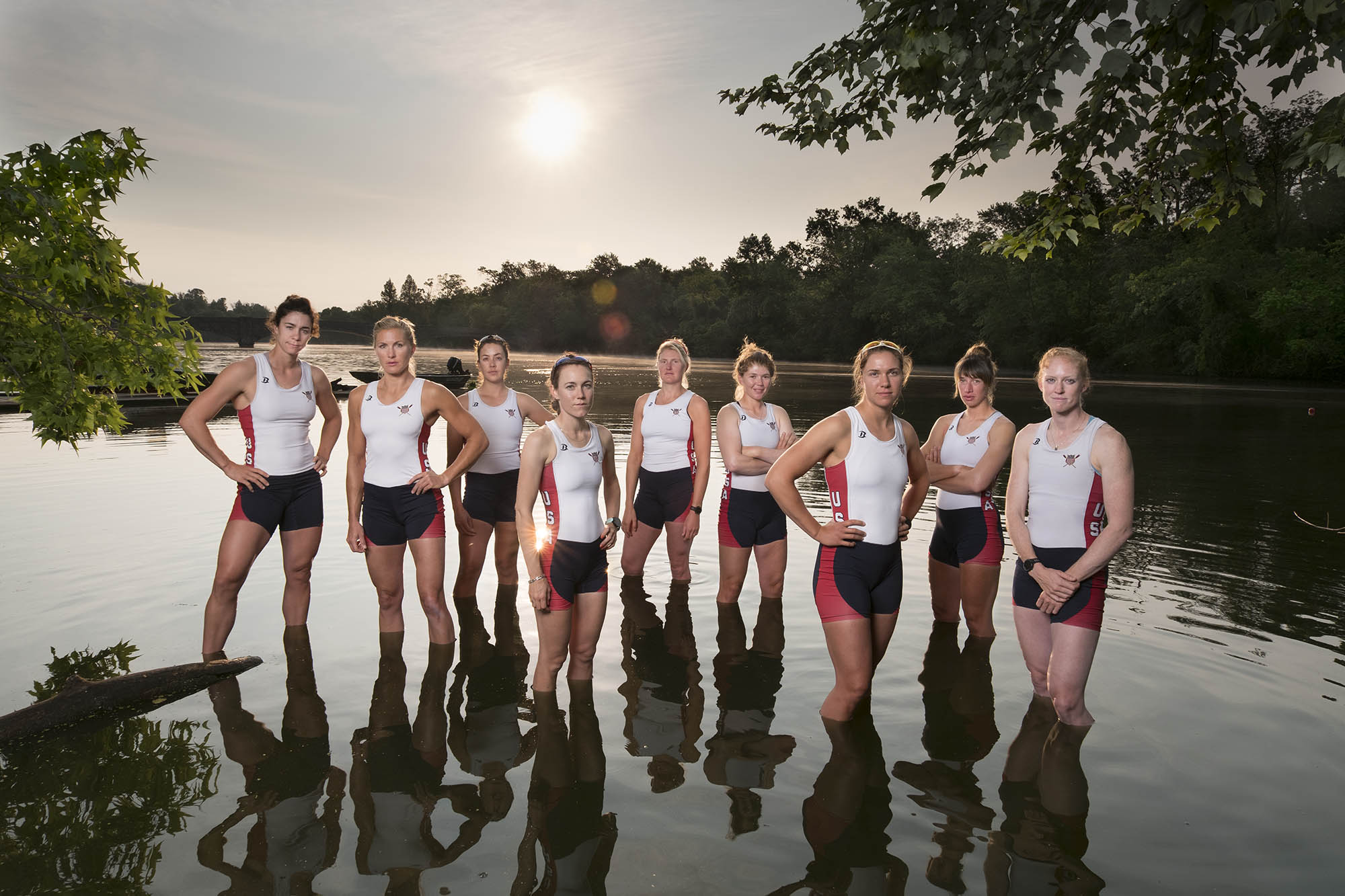 I was assigned by ‘Sports Illustrated’ to shoot a multimedia project of The USA Olympic Team Womens 8 before they travelled to Rio where they would be in the running for another Gold medal. And having recently been greatly inspired by Google’s Excellent ‘Inside Abbey Road’ I came up with the idea of shooting a 360 project with video content within it.

There is often too much emphasis on equipment but on this occasion having exactly the right tool for the job, something small, light, with superb still image quality, 4K video capable and user friendly.

Enter the brand new Fuji X-T2, the successor to the highly popular and delightful Fuji X-T1

There are many really good camera’s out there but in my opinion none have the special ‘instantly at home’ feel for someone coming from a DSLR as Fuji does with its ‘X’ series cameras.

I am baffled as to why Fuji is alone amongst digital camera manufacturer has managed to successfully take the ‘soul’ from a film camera and transplant it in a digital offering (incidentally this is not an opinion I have reached overnight, but a view I have held for some years now.

I’m delighted to say that Fuji have been successful in carrying on this tradition with the Fuji X-T2, combining a truly intuitive user experience with superb performance on all fronts.

24.3mp X-Trans CMOS sensor which feature which debuted on the Fuji X-Pro2 is quite a step forward over the X-T1

The X-T2 is a camera with heaps of performance and is ready to shoot when you are, you can feel from the moment you pick the camera that it has massive processing power – dubbed the X Processor Pro. Aside from the sensor this is one of the key areas I look for as it is pointless having a great sensor if the camera does not have the processing power to handle it.

A powerful processor opens the gateway to all sorts of high performance feature in a camera, such as 14 frames a second (should you need it), 325 autofocus points and 4k video at up to 30fps (more of this later)

Ok so it is incredibly responsive and easy to use but what about the image quality?

I am happy to report that the image quality in terms of resolution is handy step forward over the X-T1 delivering more detail and the dynamic range, though I have not had chance to test this back to back it seems to be better.

The X-T2 viewfinder is clearer and brighter than the X-T1 and I found it easy to manually focus.

So how did it work out?

First shot of the day was the team portrait in the lake, this was carefully worked out to coincide with Sunrise (a time so early that it is actually difficult to get yourself to believe it will ever get light)

The still shot was actually way more difficult than it might first appear as there was only a limited area of hard standing in the water after that you hit deep mud…which also smelled pretty bad.

Taylor Ballentyne who shot behind the scenes of the project was kind enough to stand in so we could establish where it would be safe to stand.

Then there was the lighting.

The guys at Scheimpflug were super helpful and highly professional and were more than happy to let me come along a couple of days before the shoot so I could test the gear and ensure it worked as it should (this might seem a bit extreme but this shoot was super special and I wanted to make sure I made no mistakes). These guys are highly recommended.

Why Profoto B1 lights? Well right now my opinion they are the simplest, most reliable location light out there in with not a cable in sight, this gives you unparalleled flexibility – it is a photographers license to put a light just about anywhere.

I did not use the Profoto modifiers – I instead reverted to my softbox of choice the Chimera medium softbox (with a white interior).

I have been using the soft but highly directional Chimera modifiers exclusively for 20 ish years, they give me exactly the look I want and you can do so many clever things with them – they are versatility personified.

If the team were on a limited small hard(ish) standing area where could I put the lights?

I was restricted to putting the key lights at the edge of Lake Carnegie, which as you will see from my drawing, has all sorts of creatures swimming in it.

I needed a little more power and I ‘only’ had 4 lights – which sounds like a lot but when you are shooting a large group on location and you are aiming for F11 or F8 to ensure everyone is in focus it really is not a great deal of light.

I was going to put a light in the water as a back light but as the sun was a great celestial back light it freed up one more Profoto B1 head.

So it was three Profoto B1 lights off to camera left, which worked very well but I needed a little fill head on so I used my last Profoto B1 in a brolly – the lights were set.

The team entered the water and I had a very short period of time with them – think around 10 – 15 mins in the water before they went training.

Even though time was short I mounted the Fuji X-T2 on my Gitzo tripod as if needed to undertake any extensive post production (which I didn’t) it was going to be much easier – remember the tripod is your friend…..

The second shot was the 360 stills panorama where I needed to have clickable hotspots which would link to short video interviews with the team members.

Have a look at the 360 shot with videos here.

I really did not want to switch between multiple cameras so the Fuji X-T2’s enhanced video capability came into play.

Though we did not output the video in in 4K(we downsampled the footage to 720p so the final file would be less ‘heavy’) we did shoot the videos in 4K as being in the throes of another major project everything HAS to be shot in 4K it seems like ‘short change’ to shoot in 1080p but perhaps more importantly it gives me the capability to crop into the video. As we were shooting with ‘just’ one camera this could be a useful feature to have to say the very least.

While I am talking video I shot in the standard 4K setting as Fuji’s F-Log, which ensures you get the maximum from a file as you shoot in a ‘flat’ profile was not yet available when I shot the project.

Some of the enhanced video features that were available to me on the day, the ability to monitor audio via the headphone jack and the extended recording time (30 mins of 4K) came to me courtesy of the new VG-XT2 hand grip which takes two batteries in addition to the standard camera battery.

The 360 stills shot itself was shot on the Fuji X-T2 with the excellent Zeiss Touit 12mm lens which I find to be a dream for 360 panoramas and I used the Seitz Roundshot VR drive which I have come to rely on to deliver the goods day in day out without missing a beat. Ever.

When you are using a motorised VR head – sometimes with quite big lenses and battery packs the weight does add up so I use the Gitzo GT5562LTS which is a serious pro tripod which you can fit in your carry on luggage. For the still 360(and the stills team shot in the lake) I used the Gitzo 5381SQR which is perfect for panoramas and landscapes – it is however worthy of note as this tripod does take a full on video head too – one tripod which really does do it all.

Speaking of something that does it all it seems like a good place to round up with my thoughts on the Fuji X-T2.

If you use a an X-T1 and you are expecting a camera which completely different from your current camera then think again – the X-T2 is more about evolution than revolution and it is all the better for it, with tweaks and enhancements which makes it the most complete mirrorless camera to date that Fuji has yet produced

For me this is the camera which takes the ‘X’ series into everyday pro territory for the first time. Until now, for me at least, the X cameras which I love with their charm and wonderful image quality have been been my ‘fun’ cameras and I have walked out the door to shoot the ‘big’ jobs on something else.

The mixed still/360 still and 4k video nature of this assignment was a serious challenge and one that X-T2 rose to without any fuss or drama – excelling in every area WITHOUT making my brain melt.

Whisper it. Fuji might, just might have, produced the best mirrorless camera to date one that combines charm, image quality, capability and is a joy to use.