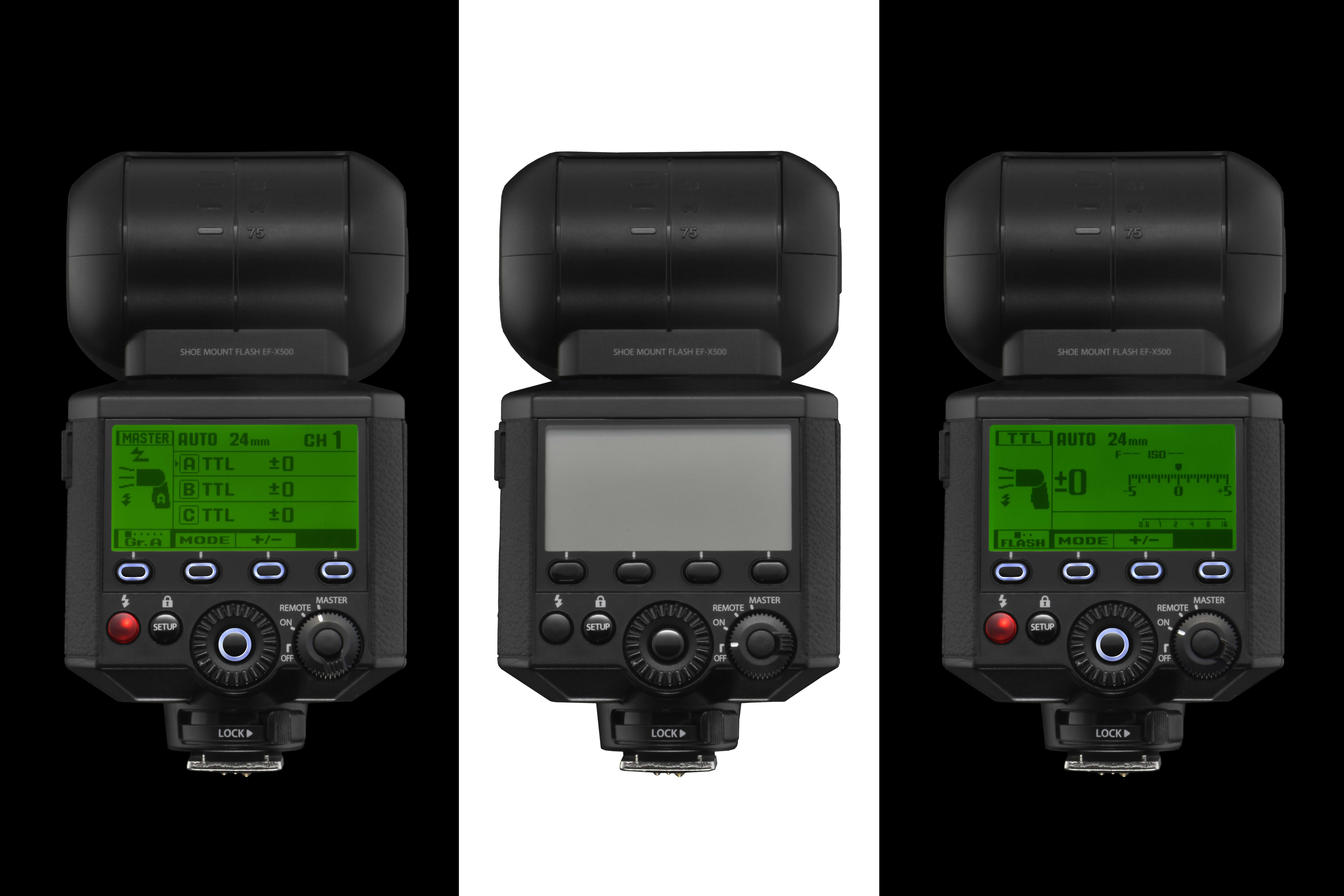 Let’s talk about the benefits of introducing a new light source into your image!

With the advent of the new EF-X500 flash unit, our first professional ETTL flash, we thought we could shed some light on the age-old question “natural light or introduced light?”

We are here to give you a brief rundown of the Fujifilm EF-X500 and how it can benefit your Fujifilm X-Series kit.

From a set of Ni-MH rechargeable you can expect to get 170 flashes and with the optional battery pack EF-BP1, which holds an additional eight batteries, this amount will be extended to approximately 350 flashes. The EF-BP1 will not only improve the number of flashes but also the recycle time, so if you are a wedding photographer this could be a useful accessory to have.

The benefit of zoom allows additional control of the light for the image you’re trying to create.

The Fujifilm EF-X500 allows the flash to zoom from 24-105mm. What this will do is allow your flash to either fire a very wide range to suit a wider angled lens or emit a narrower flash to suit a portrait or telephoto lens. The end result will enable you to light an entire scene or just pick out an individual subject from a scene.

This feature is a very common setting for on camera flash users who wish to add some motion to their images.

Front Curtain Sync means once you depress the shutter button on the camera, the flash will immediately fire, and Rear Curtain Sync delays the flash until the end of the exposure before the curtain covers your sensor.

So what does this actually do to your image?

You won’t notice a great deal until you get to slower shutter speeds under 1/50th of a second. By lowering your shutter speed it will actually allow any moving highlights in your image to blur whilst freezing the image in the foreground fairly sharp, creating a sense of movement in your image.

The easiest way to remember the difference between the two settings is:

Select Rear Curtain Sync and it will capture the movement at the end of the subjects motion, selecting Front Curtain Sync freezes movement from the beginning.

Electronic Through The Lens (ETTL)

Using the automatic setting when starting out with a flash is sometimes the best option. This is essentially the auto mode for flashes and should be used that way. ETTL technology proves to be a fantastic option whenever you are shooting with the EF-X500 flash on the move and want your Fujifilm X-Series camera to do all the work.

The camera and flash will ‘talk’ with each other as soon as you half press the shutter button, to determine the metering settings, distance from your subject, the ISO, shutter speed and aperture. Once this happens (very quickly) the flash will trigger knowing the exact amount of power it needs for whatever situation you may find yourself in.

When combined with ETTL, Flash Exposure Compensation allows you to be a little more creative. If you’re familiar with your camera’s normal exposure compensation, this works in a similar way, by controlling your flashes light output. On the Fujifilm EF-X500 you can control the power up and down by -5 and +5 EV.

This is the first time HSS will grace the Fujifilm X Series line up and it has been a request from many photographers since the launch of the Fujifilm X-Pro1. Previously the sync speed of 180X was the maximum sync for flash and on recent models this was increased to 250X. Sync speed is basically the highest shutter speed the flash will sync at.

Now with the combination of the Fujifilm X-Pro2 and the EF-X500, photographers can increase their sync speed up to a maximum shutter speed of 1/8000th of a second.

So what does HSS actually do? Remember when we spoke about Front and Rear Curtain Sync? I explained that the flash fired either at the beginning or the end of the frame you will be taking. At shutter speeds faster than 1/250th of a second, the gap between the front and rear curtains is too narrow to expose the whole sensor to your subject illuminated by a single flash output.

HSS disregards that entirely and instead of only letting out one individual flash, it fires multiple pulses to ensure your flash fills the entire frame.

HSS is a very handy setting for combating the sun when photographing portraits or for using flash and a shallow Depth of Field (DOF) during the middle of the day.

The LED AF assist lamp on the EF-X500 is Fujifilm’s first on flash AF assist to work with X Series cameras, allowing fast focus in low light! Here’s a quick explanation on why this is a big deal for both introduced light and natural light photographers.

Cameras need contrasting details within the focus area in order to achieve focus. During low light situations there is less contrast for the camera to work with, however the extra light from the AF assist lamp makes up for this.

Even if you’re shooting with only natural light, you can take advantage of the EF-X500’s AF assist lamp to allow ultra fast and reliable focus speeds in low light.

With the introduction of the Fujifilm EF-X500, the option to use your X series flashes off camera has never been easier!

With optical pulse technology built in (wireless communication), a number of EF-X500 flashes can communicate wirelessly when an EF-X500 flash is mounted on top of selected X Series cameras. This function offers four channels within 3 different groups allowing complete control to strobist photographers.

The highly anticipated X-T2 will be fully compatible with all of the EF-X500’s functions.

X-Pro2 and X-T1 (including X-T1 Graphite Silver) will be compatible with some EF-X500 functions. A firmware update will be required for enabling full compatibility.

All other X Series cameras featuring a hot-shoe are compatible with some of the EF-X500 functions (for more details see http://www.fujifilm.com.au)

This is the first professional Fujifilm flash that has the option for both flash groups and channels meaning it is designed to be used both on and off your camera’s hot shoe.

For more dramatic lighting we would highly recommend using a light stand and moving your flash around your subject at different flash zoom levels and flash powers to create some creative and interesting looks.

Will Anlezark works at Fujifilm Australia as Field Technical and Sales Support Representative. He is a passionate wedding photographer and experienced videographer and loves to share his imaging knowledge to a larger audience.