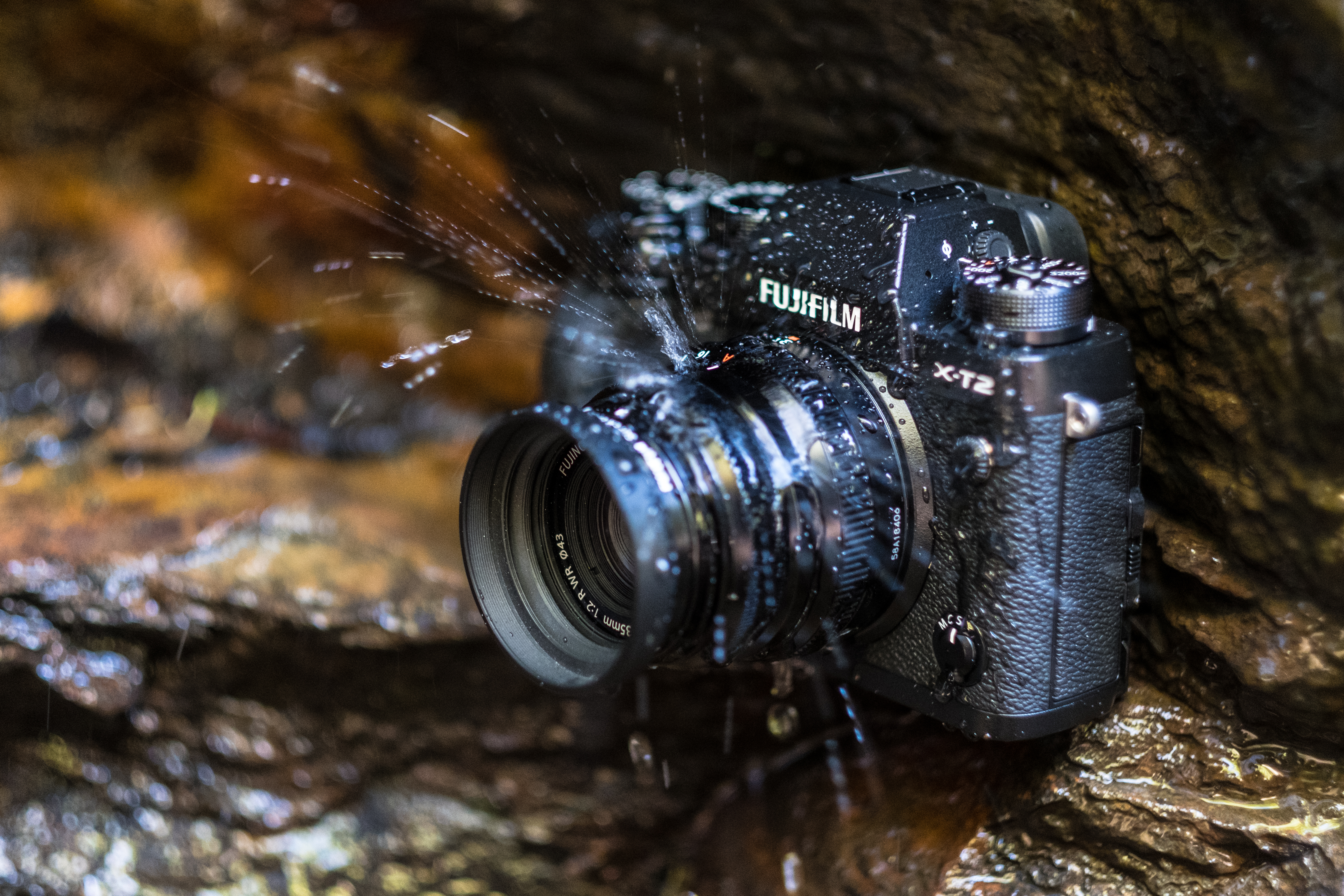 Imagine a camera that takes the best features of the Fujifilm X-T1 and X-Pro2 and combines them together to create the ultimate photographers and videographers tool.

Well, today we are excited to announce the combination of these cameras in the new Fujifilm X-T2!

The Fujifilm X-T2 is one of the most anticipated cameras in Fujifilm’s history. Not only will the impressive 24.3MP APS-C X Trans CMOS III sensor capture the joy of photographers around the world, but now with the addition of 4K and 2K video formats you will be able to film the emotion too!

Adding to this is a bundle of features that includes an electronic shutter with a limit of 1/32,000 second, an Intelligent Hybrid Phase detection AF, a robust weather resistant body, an impressive 3-way tilting 3.0” LCD and a 2.36 Million dots Electronic Viewfinder and dual SD UHS-II memory card slots that will capture up to 14 frames per second with the Performance Boost Mode turned on.

All of these features sound impressive (and they are), but the list of specs doesn’t stop there. As mentioned earlier the 4K video quality this camera now records is on par with some of the other professional cameras out there. When filming video you can expect excellent sharpness and low noise when recording up to a maximum of ISO 12800.

Another important feature unique to videographers is the ability to choose a video frame rate. Fujifilm has liaised with various professionals and industry leaders to determine what settings best suit. Within the new Fujifilm X-T2 videographers will be able to select 29.97P, 25P, 24P and 23.98P when filming in 4K and if Full HD is selected; 59.94P, 50P, 29.97P, 25P, 24P and 23.98P at a 100Mbps Video Bit rate.

There are also a lot of settings that can be changed once you press the record button. You will be able to change exposure in ⅓ stop increments, correct the colour and the angle of view. Added to this is the option to change the exposure via the external HDMI port, which is well suited for videographers using external monitors.

When you first handle the Fujifilm X-T2 you will immediately feel the magnesium alloy chassis that has been redesigned based on photographers feedback. With weather resistant sealing to suit rugged outdoor conditions, this professional body is slightly larger than the Fujifilm X-T1 due to improved control dials that turn easily with or without gloves. The new lock buttons located on the shutter and ISO dials are easily pressed to turn on or off the action of selecting a new setting. Also the enlarged drive mode and photometry selection dials can easily be accessed due to this new ergonomic design.

As shown in the video (above) the 1.62 million-dot 3-inch LCD screen has been redesigned to suit photographers. Now with a 3-way tilting screen, the photographer can turn and rotate the screen to a visible position when holding the camera above their head in a portrait orientation. Previously on the Fujifilm X-T1 the screen was only visible in a horizontal orientation.

The launch of the Fujifilm X-T1 saw photographers from many different genres switch over to Fujifilm due to the large range of Fujinon lenses available. Sports and wildlife photographers were among the newly acquainted, but this was not only due to the lens selection, but also the features on the Fujifilm
X-T1 like autofocus and UHS-II memory card compatibility. Learning from this the new Fujifilm X-T2 takes autofocus speed and memory card storage to the next level.

The Fujifilm X-T2 is slightly different in the way the camera focuses when compared to the Fujifilm X-T1. This is because of the new Intelligent Hybrid Phase detection autofocus. The new X-T2 will allow you to select up to 325 autofocus points allowing for precise focus. What this means is no matter whether the subject is within the frame, the camera will autofocus very quickly to pick up the subject.

Adding to the list of new features is also a dual memory card slot that is now capable of recording to two UHS-II compatible cards. What this means for photographers is they can record photos up to 14 frames per second (when Performance Boost mode and Electronic Shutter is selected), which will result in a total of 42 Jpeg frames or 28 RAW frames stored at Lossless compression. This option is only available when the VPB-XT2 grip is on the camera.

Not only does the optional VPB-XT2 (Vertical Power Booster Grip) increase frame rate, but it also will accommodate two additional batteries (NP-W126S) at the same time to boost in shooting interval, shutter release time lag and blackout time while extending 4K video recording to a maximum of 30 minutes.

As mentioned, when you use the optional VPB-XT2 battery grip you can select different frame rates like 14 frames per second, however, if this is too fast 11 frames per second can also be selected.

The X-T2’s ISO range of 200 – 12800 (RAW shooting) is exactly the same as the Fujifilm X-Pro2. When recording at high ISO like 3200 or 6400 photographers will find images and video to be very clear resulting in smooth graduation and deeper blacks.

Studio and wedding photographers will enjoy using the Fujifilm X-T2 as the camera can now act as a commander when firing off multiple flash units when using the newly announced Fujifilm EF-EX500 flash. Found within the camera’s menu is the ability to select ‘COMMANDER’ mode, which enables full manual control of up to three supported Fujifilm flash units. Each supported flash can be manual adjusted to ensure you get the best possible picture.

It is Fujifilm’s hope to design a camera that will suit a photographer’s requirements and it is refreshing to see that the X-T2 does this. Something many were not predicting though was the ability to film in 4K. Having mentioned this, it is worth thinking about to expand upon your skills to embrace this chance. Not all photographers will embrace this addition and that is okay, but to those who wish to expand on their skills the feature is there for you to explore and the same can be said to videographers when it comes to taking photos.

This article hasn’t covered all of the specifications nor the implementations of the Fujifilm X-T2, so we would encourage you to follow this global Fujifilm blog which is now supported by Fujifilm Australia, Fujifilm UK, Fujifilm USA and Fujifilm Canada. We also ask you subscribe to the global Fujiguys YouTube channel to learn more about the Fujifilm X-T2 from contributions around the world. Together we are one and together we are here to listen to you the photographer – and now the videographer too.