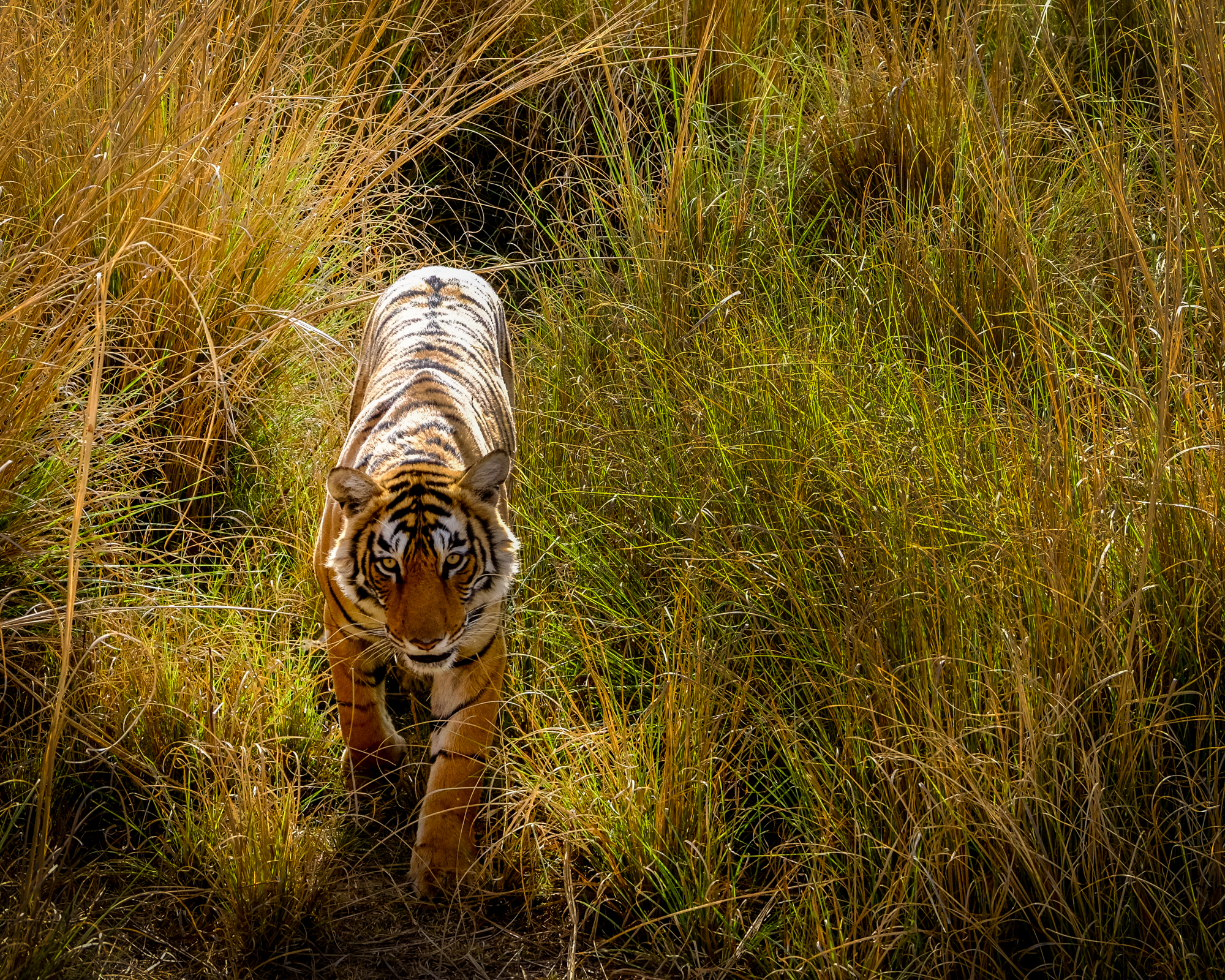 It spread through the air like static electricity, conducting from one person to another. Fear truly is contagious.

Everyone was running away from the rather skinny looking snake. Skinny or not, the guides and camel tenders were visibly frightened. You could feel the fear in the air.

We had just spent our first night in the Thar desert close to the border with Pakistan, sleeping on the sand dunes with four other travelers we had met the night before. The blankets we had been sleeping on had been piled up ready to be put on the camels. It was then that the snake was spotted.

Armed with sticks, shovels and an axe, the camel tenders returned. One of them went forward and nervously lifted the corner of the top blanket. No snake. He lifted it higher, then pulled it off the pile as he quickly backed away. The others moved in with clubs and axes ready to pounce. Still no snake. They retreated again. This process was repeated four times before the snake was found. Each man swung his stick or axe clubbing the ground wildly before running away, looking back to see if the snake was chasing them. The snake however had disappeared into the sand. We asked Mulla (our guide) how dangerous it was. “It’s a Lundi snake, very dangerous, very poisonous” he said.  The men, armed with shovels, moved in. I thought they were just going to chase it away but the process of digging, hitting and running away continued until the snake eventually received a blow from a stick and a man with an axe moved in to finish it off.

When we got back, we looked up “Lundi snake”. Lundi is the Urdu name for a sub species of Saw Scaled Viper. It is described as a very fast moving snake that strikes quickly & repeatedly, with reports of it chasing its victims relentlessly, and in India alone, it is responsible for an estimated 5,000 human fatalities a year.

Once the snake was no longer a threat, the camels were saddled up and our companions from last night started on their way back to Jaisalmer.

Jo, I and Mulla set off in the opposite direction, further into the desert. There are many things one can do on a camel but being comfortable is not one of them, well not at first anyway. It also seems a slow way of traveling but before you know it you have covered a considerable distance and things that were on the horizon are now beside you. It’s a bit like traveling by canal boat in Britain but with more pain and less tea. It was scorching by the time we stopped for lunch and took shelter from the sun as it was far too hot to move when the sun is at its height. Even at 5pm when we stopped at an oasis to water the camels, it was still 42.9 C degrees in the shade. We finally stopped for the night on a small group of sand dunes. As Mulla made us tea, we watched 8 Desert Eagles circle in the thermals above us. Eventually they lost height and settled in a tree from where they kept us company till the morning. We spread the camel blankets out on the dune and looked at the stars till we fell asleep. Even though we woke many times during the night, each time the night sky was stunning.

The next morning Mulla said that there had been a lot of Lundi snake activity during the night and there were snake tracks around the camels. He said that he was relieved that the camels had not been bitten as it would have killed them. We showed him some tracks where something had come up the dune to where we had been sleeping and passed just over a metre away from where my head had been. “That Lundi snake” he said. “A big one”. “But we were sleeping there!“ we exclaimed. “You very lucky” he said.

We were very lucky a lot on this trip. We had started off in Delhi before going to Varanasi, Agra and then Ranthambore National Park near Jaipur. We were told that you should book at least 6 safaris to stand a good chance of seeing a tiger. We booked 6. We saw 8 different tigers including a mother and her two 9 month old cubs.

We met funny and generous people who went out of their way to look after us and show us around. We were accepted into an Indian family to experience the Holi festival with them in Jaipur.

We then went on to Spiti valley where we met the Lama of the Kee Monastry who showed us around, unlocking rooms and ushering us in as he went. In one room there was a metal encased Stupa about 10 ft high,decorated with emeralds and other precious stones containing ashes of the 6th to the 13th Dali Lamas. Afterwards he took us into his private room and gave us tea and cake before giving us his blessing and waving us off.

On previous trips through Nepal, Vietnam and Cambodia I had taken my Canon kit. It had worked well but it was heavy and took up a lot of room. On the Nepal trip for instance, we had hired an extra porter as we were going into the Annapurna Sanctuary. It’s a long walk if you are carrying heavy gear and are not used to the altitude.

In practice this meant that I could carry the complete kit with ease in a waist pack. It was a bit of a tight fit when everything was in it, but when I was using the camera it was easy to change lenses or get the flash out. I found it much easier to manage the Fuji kit than it was to manage the Canon 5Dmk 3 with its lenses, where I needed a much bigger camera rucksack. Although the Fuji lenses I was using are not much smaller than the Canon Lenses, the X-T1 is significantly smaller than the Canon full frame. This meant that everything fitted into the waist bag even the lens hoods! The lens hoods may not sound like a big deal, but to me they are. Previously I had tried everything I could think of to accommodate lens hoods for my Canon lenses, ending up with collapsible rubber ones that I would keep in the top part of my camera rucksack and put on when I was using a particular lens. It was less than ideal. Changing lenses would usually require taking the rucksack off, opening the bottom compartment to change the lens and then opening the top compartment to get the lens hood.

With the X-T1 body and the Fuji lenses with the lens hoods fitted, all within the belt pack, changing lenses became much easier. It was certainly a lot safer when changing lenses in crowded environments where there were warnings of pickpockets operating.

The other thing that is worth mentioning is that although in practice there was not much difference in size and weight of the Fuji lenses compared to the Canon ones, the Fuji ones have an aperture of f2.8 as opposed to the f4 on my Canon lenses. As a travel kit, I found it worked wonderfully. I had a good range of focal lengths and a comparatively wide aperture when I needed it.

Part 2 of Tom Corban’s adventure through India can be found here.

1 comment on “India – The Good, The Great and The Downright Scary – Part 1”