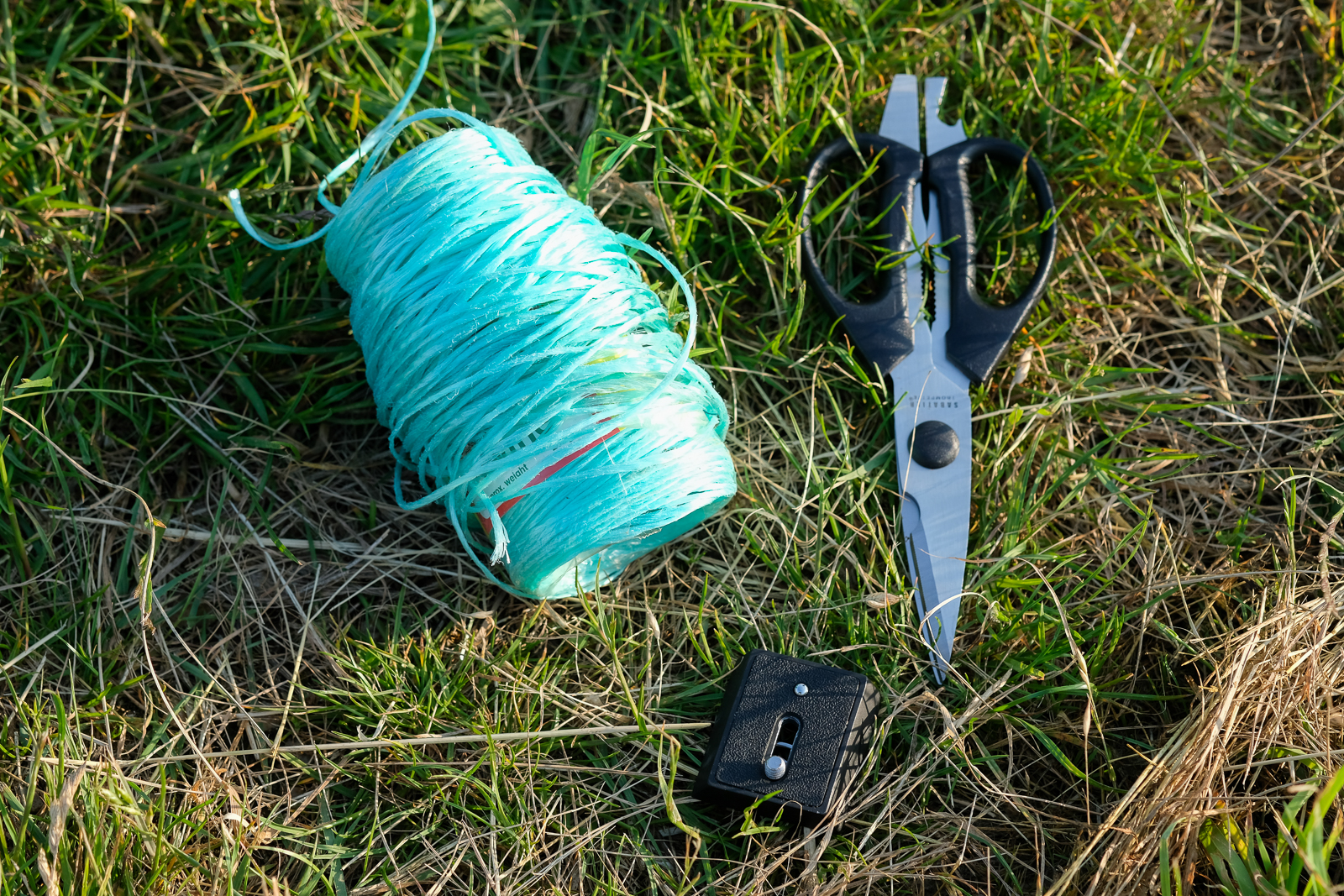 Tripods. They’re very useful when it comes to avoiding camera shake, but they can be quite bulky things to lug around – even the lighter carbon-fibre versions. But while Fujifilm have created impressive Optical Image Stabilisation systems in their lenses, there is a way of beating the shakes using nothing more than a piece of string and a tripod quick release plate. Better still, you can fit this set up in your pocket so you’ll never have an excuse for leaving it at home.

These are the constituent parts needed to create your stringpod. String (funnily enough), a tripod plate and a pair of scissors (unless you’ve got very strong teeth). I’ve used green garden twine largely because it’s easier to see in these pictures. Normal string does the job just fine.

Start by passing the string through the oval handle on the bottom of the quick release plate.

Now, pull a double length of string out and place it under your foot. Don’t cut the string just yet, you’re just sizing up at this stage.

With the string under your foot, hold the plate so the string is taut and make sure it’s at eye level. It’s worth screwing your camera on to the plate and repeating this process, varying the length of string as required until you get the height perfect for you. Only when you’re happy, cut the string.

Being a failed boy scout, I only know one type of knot, so I tied it here once I had the height right for me. My stringpod was now ready for use.

If you want to use the stringpod standing up and have a Fujifilm camera with a tilting rear LCD, you have two options. First, just place it under one foot, pull the string tight and use the camera’s viewfinder. Alternatively, to shoot at waist level, flip the screen out, stand with your feet around shoulder width apart, pass the string under both feet and, again, pull it tight to create a triangle.

Finally, if you want a lower angle, wrap the string around one wrist, pass it under both knees and pull the whole set up tight. The key to reducing camera shake, is keeping that string tight.

So, how well does it work? Due to a motorbike accident some few years ago, I have the weakest wrists known to man so I don’t really like to stray below 1/60sec when I’m hand-holding. This shot was taken at 1/20sec at f/22 and, as you can see, it’s all over the shop.

Using my stringpod, however, I was able to get a shake free result using the same exposure combination. I’m not saying it’s going to work with ten second exposures at night, but it could well get you out of a tight spot when you’ve left the tripod at home.