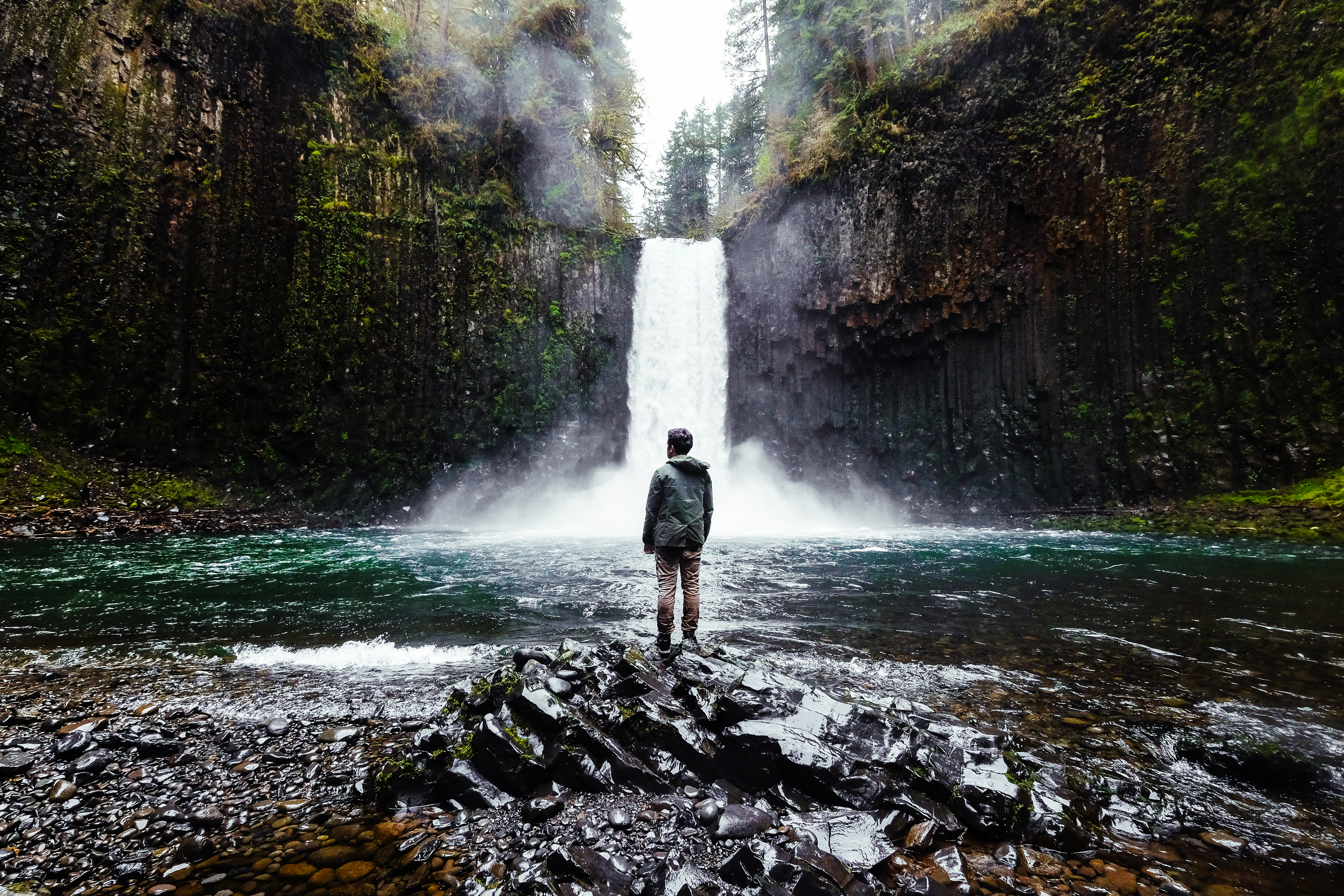 From the moment I truly began to pursue photography, I strived to distinguish my work from the millions of images flooding digital media across the world. In doing so, I’ve always been an advocate of doing whatever it takes to get the shot. Whether that means hiking a treacherous mountainside all night to capture the beauty of first light from an unseen perspective, or hanging from an abandoned bridge 2,000 feet above the ground, capturing timeless moments are what I live for. Through my experiences, I have learned that photography is a key factor in the difference between being alive, and actually living. Abiding by this principle, I set out on road trip from Los Angeles to Seattle accompanied by two talented friends and an arsenal of Fujifilm X Series gear.

We left LA for Oregon on a Tuesday afternoon, and after a brutal sleepless 16-hour road trip, we made it to our first destination – Abiqua Falls. Fortunately our car for the trip was a 4WD Jeep, and allowed us to take the mile long off-road path to the trailhead for the falls. With tattered sneakers accompanied by a light rainfall, I ventured through Oregon’s lush landscape for my first time. The abundance of massive trees and greenery were like nothing I had ever seen before. The hike down to the river was pretty intimidating, and required you to scale down a lengthy and steep hillside that was only accessible by a rope tied to an old tree at the top. I went first, and discovered that the last hundred meters of the slippery, muddy terrain had no support rope. After my first step I went down with no control, and slid for about a hundred feet, ruining my clothes and scratching up my hands in the process. Nevertheless, we all made it down eventually and hiked alongside the river to our destination. I had never seen Abiqua Falls, so when we turned the corner that revealed it’s jaw-dropping beauty I was in awe.

The picturesque landscape was surreal, and I immediately began planning out the perspectives I wanted to capture in order to do it justice. What I didn’t realize was how difficult the blistering backwash from the water crashing to the surface made it to snap a photograph without drenching the camera lens. The remarkable durability and weather-resistance of the X-T1 matched by the speed, precision, and quality of the XF10-24mmF4 R OIS conquered the conditions, and allowed me to capture my experience before the backwash fogged up the lens. From Abiqua, we drove through the countryside to two of Oregon’s most iconic waterfalls, Multnomah and Latourell. These two were conveniently located very close to one another, and neither required a difficult hike to get to. Their overwhelming size was a humbling reminder of the power of Mother Nature, and gave me a challenge to capture them true to scale. Running on no sleep in almost 48 hours, we left the falls and enjoyed the hospitality of a friend and Oregon local, who took us to a famous Portland brewery before getting a couple hours of rest to continue on our photographic journey.

Several hours of sleep, a warm shower, and a cup of coffee later we were on the road again… this time headed towards Washington. We got up before sunrise to capture first light from the Rowena Crest. The dynamic range on the X-T1 did Rowena justice by capturing all the tones and colors of the current season. After a brief session at Rowena, we drove straight to Olympic National Park. We encountered wildlife along the way, including a bear and bison. It was my first time seeing such large animals up close, and thanks to compact size of the X-T1 I was able to take it out of my pocket in time to capture the moment. Olympic National Park had otherworldly nature-filled roads whose cinematic foregrounds looked like something out of Planet of the Apes. With the help of the XF16mmF1.4 R WR lens, I was able to capture the detail of the nature before me.

After exploring through Olympic, we returned to the hospitality of a friend’s home in Seattle, anxious for the adventures that were to come the next day. After a few more hours of sleep we set off to catch the infamous abandoned railroad known as Vance Creek Bridge for sunrise. Vance Creek is very dangerous if you’re not careful, and trespassers of the area are given a hefty fine if caught by authorities. This didn’t stop us; we were determined to get to the bridge and get our shots as quickly as possible. Running on minimal sleep, the excitement of visiting Vance eliminated any sense of fatigue and gave us motivation to get through the hike to find one of the most amazing abandoned locations I had ever seen. I cautiously maneuvered all the way across the bridge, and after documenting every angle I could, I hung my body off the edge of the bridge to capture the vertigo-induced lookdown perspective that is seen throughout most of my travels.

This image gives me a sense of conquering that location, and I strategically waited until I was done shooting to make my mark with the widest lens of my kit, the XF10-24mm. After leaving Vance Creek without any issues, we headed back to Seattle to take on the skies of the city in an R44 helicopter with Classic Helicopters. While I’ve had helicopter shoots across several cities in many different conditions, it was my first time shooting in harsh light, and in an unfamiliar city. Nevertheless the X-T1 and XF10-24mm combo proved their worth, showcasing the very impressive speed and accuracy of the auto-focus feature. About an hour after the flight concluded, the sun had set, signifying the end to an amazing few days spent with friends shooting in new environments with an awesome camera system. We returned to our friend’s house to catch some sleep before we set off on a 20 hour road trip back to Los Angeles.

In addition to my Pacific Northwest road trip, I also had the pleasure of shooting with Fujifilm X Series gear this past December in the winter wonderland that is Alberta, Canada. The camera withstood unbearably low temperatures, snow, and everything in between. I even hung my body out of the car at 100kmh in -20 degree weather to capture a symmetrical road shot during sunset on the way home from our final day, which consisted of a trip to Yoho National Park to capture a direct vantage point of an endless blue river. Although my winter hat flew of my head and my face turned bright red from the extreme temperature and heavy wind, the camera gear had no issues withstanding the harsh conditions and delivering excellent quality images.

In conclusion, the most valuable aspect of traveling for me has always been capturing my experiences. In doing so, I’m able to make my memories timeless and share them with the world. With the help of Fujifilm’s cutting edge X-T1 system and expansive Fujinon XF lens lineup, I was able to document my recent travels throughout Alberta, Canada and the Pacific Northwest. The durability of this mirrorless camera is incredible. The compact size and endless internal capabilities of the X-T1 also set it apart from any camera I’ve used before. One of my favorite design aspects is the moveable LCD; this made it much easier to shoot reflections and difficult perspectives that cannot be seen through a viewfinder. The XF lenses are also very impressive. Their power and design compliment the body by providing lightning-fast images of excellent quality, color and sharpness. The auto-focus feature is also remarkably consistent and accurate across all subjects, and allowed me to make the most of every rare photo opportunity Mother Nature presented along these two trips. I’m very grateful for the opportunity to work with Fujifilm’s X Series gear, and I highly recommend it to all photographers looking to take their work to the next level with a conveniently sized, sleekly designed system.