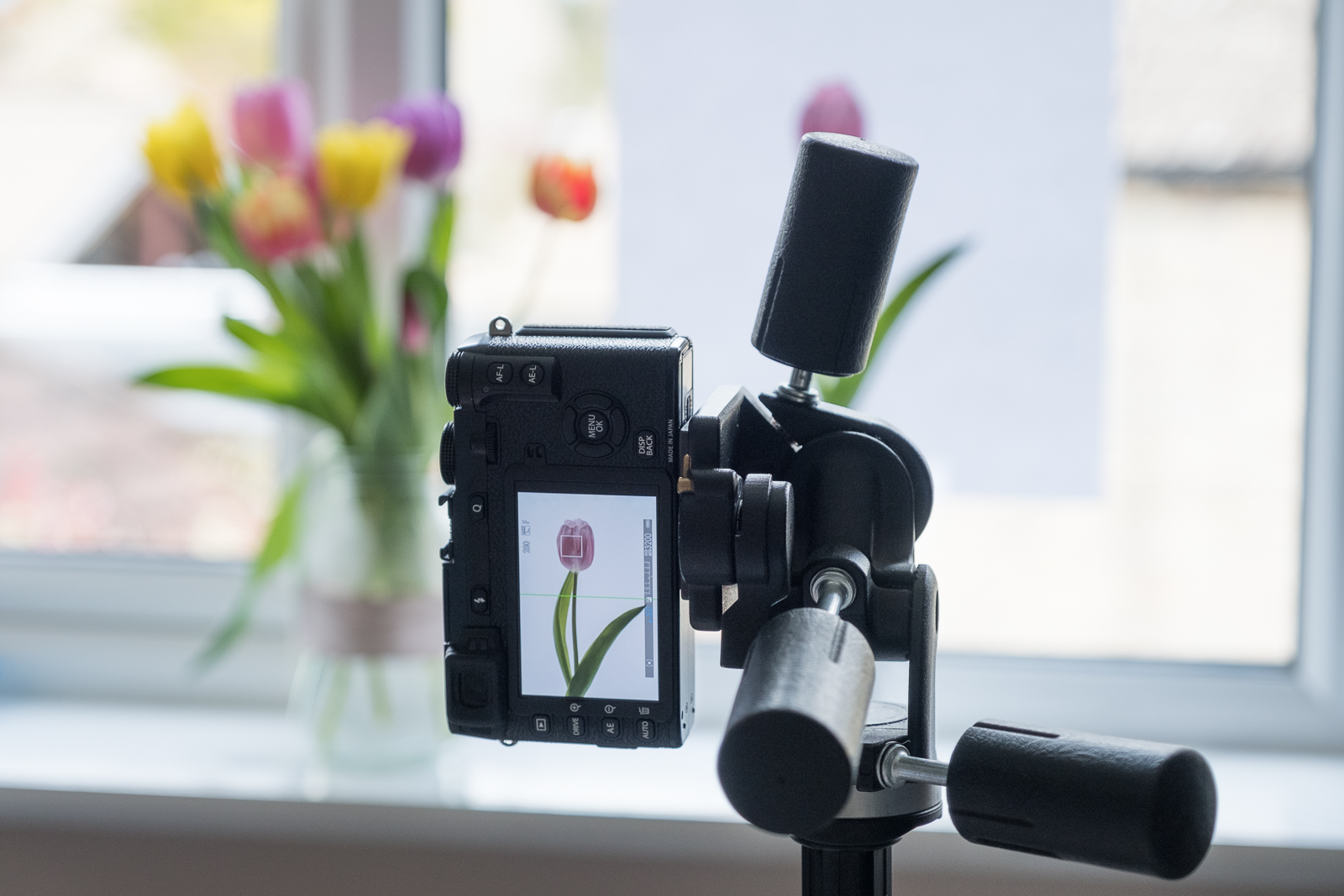 After my bathtub antics last time round – you can read that here if you missed it – I’d got the taste for creating studio quality results on the cheap. I spotted my chance when my wife bought some colourful tulips into the house and within seconds of them being put in a vase, I snaffled them to get shooting.

Aside from the flowers themselves, I used two sheets of white A3 paper, which I taped to a north-facing window. I used two sheets as a single sheet tends to show the pulp in the paper when lit from behind and then put a couple of paper clips on the bottom just to hold the sheets together and add a little weight. A couple of bulldog clips would be just as effective. With my X-E2S mounted to a tripod with the XF60mm macro lens attached, I started my shoot by selecting a custom white-balance setting; effectively to tell the camera the white point in my set-up to guarantee accurate colour reproduction. This was done by choosing White Balance in the menu, then one of the custom options before following the simple on-screen instructions. With that done, the flowers were placed in front of the paper and I got this.

It’s hardly inspiring, is it? Composition aside, the biggest problem is the fact that the white paper has gone grey. This is because metering systems are calibrated to 18% grey. This is not a problem when shooting most standard scenes, but when you have white (or black) subjects they need a helping hand. I tried two options. First, I switched to spot metering and took a reading from the shadow area of the central yellow bloom. The result was better, but was starting to bleach the highlights, so I dialed in +1.3 stops of exposure compensation instead. Better.

The fact remained that the collection of tulips weren’t really working together, so I started trying individual flowers, placed in a toothbrush holder and held in place with a piece of scrunched up paper – no expense spared! I moved the focusing point to the flower head and tried a range of framing options.

If you’ve ever used the XF60mm Macro, you’ll know that it’s optically superb, and as the lens focused I found myself liking the abstract-like shapes in the out-of-focus bloom areas. So I switched to manual focusing, deliberately defocused and then took a range of images varying the aperture from F2.4 to F11, which altered the amount that was sharp. This one at F3.6 suited me best.

I swapped to another flower and did the same, shooting some in sharp focus and some defocused. This was repeated on the third bloom with which I also tried a few Film Simulation modes, including basic Black & White and Classic Chrome.

Shooting done, when I came to edit the images, I really liked the defocused shots and thought they could create a piece of abstract art if I created a triptych, which was easy enough to do in Photoshop. I simply created a black background, then dropped the images on in turn before shuffling them around until I got the position right.

What do you think? I rather like the look. My wife, however, was a little less impressed. Turns out tulips don’t like being man-handled a great deal and the ones I’d photographed individually soon wilted.

Back to the shops for me!