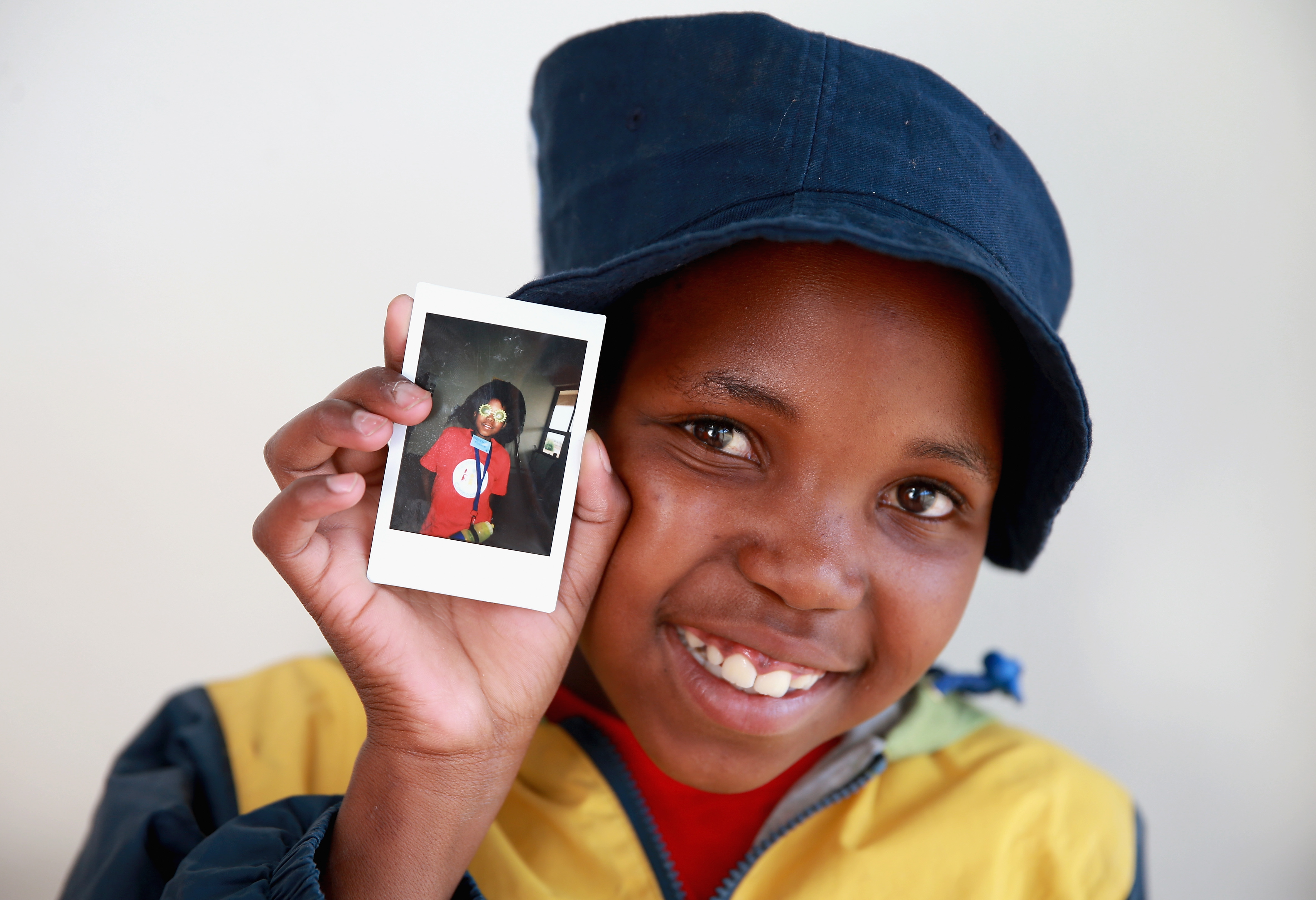 Courtesy of Chris Jackson/Getty Images. All rights reserved
Working alongside Sentebale, the Lesotho Photo Project developed from an idea to bring photography to the vulnerable children of Lesotho, through the medium of workshops, lessons and classes ran by Getty Images photographer, Chris Jackson, using Fujifilm instax cameras and instant film.

Chris tells us about how the project got started.

“For the last eight years or so I’ve been regularly travelling out to the remote South African Mountain Kingdom of Lesotho to document the work of Sentabale, a Charity that was founded over 10 years ago by Prince Harry alongside Prince Seeiso of Lesotho.

“Sentebale simply means ‘forget me not’ in the the local Sesotho language. The charity focuses its work on the vulnerable children of what can be a harsh and unforgiving country – Lesotho has been ravaged by HIV/ AIDS, suffering from the second highest rate in the world. This has left an orphaned generation in desperate need of support, education and medicine.”

“Documenting numerous visits by Prince Harry over the years has been a real privilege. I’ve also spent time capturing the work of the charity, their partners and umbrella projects.

“Over the years I have grown to know the children and staff in Lesotho well and it made me keen to get involved in more depth. I’ve always noticed the positive effect that the process of taking a photo has on the children. It’s almost therapeutic, the universal language of the still image has always been a means by which I am able to break down boundaries and create and immediate connection with the children I am photographing. On previous visits I have also noticed in many of the orphanages the children love creating montages on the wall of their friends and staff.”

“As in many of the counties I’ve been to around the world, the kids love looking at the digital image on the back of the camera and the pleasure I get from taking it becomes a shared joy with many of the subjects I captured. It was to this end that I contacted Fuji who kindly gave me some brightly coloured Instax 8 cameras as well as a set of digital bridge cameras to take out to Lesotho with a view to giving the children an opportunity to get involved in photography sessions. I was sure that photography was a tool that would enable the children to, not only be creative, but strengthen many of the important messages Sentebale are keen to reinforce.”

The children took part in photography lessons, with their images printing and developing instantly on Fujifilm instax cameras. A large photography wall was created in the shape of the official Sentebale flower, using the children‘s instax prints and they were encouraged to express their thoughts and feelings through their images.

“Much of the money raised by Sentebale over the last few years has gone towards an incredible, multi-functional facility – The Mamohato Children’s Centre, designed to provide emotional, psychological and medical support to the children. Based on sacred land donated by the King outside the capital, Maseru, the centre is used to run week-long ‘Network Camps’ for vulnerable and HIV positive children. Education, health awareness and above all fun are key for the children who visit. It was here that I was lucky enough to be given permission to start running photography sessions for the children. With over 10 camps a year and up to 100 children in each camp it was a chance for many of this disadvantaged children of Lesotho to get involved in the magic of photography.”

“I headed out to Lesotho to begin the project armed with sacks of dressing up gear, a number of massively overweight bags containing the cameras and a huge amount of AA batteries! The thing that concerned me the most was getting the film to Africa safely and it took a lot of negotiating to get the packs of instant film around the numerous X-ray machines (which can affect it). One bag went AWOL in Dubai en-route and it was a huge sense of relief that I arrived at the Mamohato Centre 28 hours after leaving Heathrow jelagged, stressed but with all the cameras in one piece!”

“In Lesotho I was able to not only give training to the staff (who use digital cameras to document the weekly Mamohato Network Camps, images of which are used to create a slideshow for the children at the end of the week) but also to introduce the cameras to volunteers (who run the camps), explain how they worked and discuss concepts for sessions with the children.

“As we suspected the cameras were an instant hit with the children, many came into sessions very shy and reserved but left smiling and with a previously unseen level of confidence. Each group of children took part in an hour long ‘fun’ introductory session, creating a collage on the wall. Knowing that the children in Lesotho love to dance and sing I was keen to make the lessons quite physical and with a real sense of fun. I played music in each class and, along with the volunteers, we encouraged the children to ‘shake it’ ‘shake it’ with the instant photos, most of the sessions involved a real sense of fun as the kids danced round shaking their photos in time to the music. I know that the instant-film aficionados will tell me it’s not essential to develop the film in this way but it was a great way of making the lessons less static and the kids loved it! Every time my whistle blew the children would gather the images they had created to build a montage on the wall around a logo of the charity. Towards the end of the session the children dived into the dressing up box and created images of each other gear in everything from pink wigs to father Christmas hats – great fun!”

“In addition to this throughout the week the children created a ‘Mamohato Times’ newspaper using their photos and text they had written. This was a more cerebral activity that the introduction sessions and the instant cameras were perfect for this as they enabled the children to conceptualize and image, create it and immediately write about it. This idea developed from something the children had done previously. For me it was incredibly satisfying to see them using the cameras so creatively and thoughtfully to create something that reinforced many of the important messages they were being taught as well as remind them of many of the great friends they had made. At the end of a week-long camp the children were able to take away the images they had created, a lasting memory of the camp and something to show their family – invaluable.”

“After my initial visit to Lesotho to initiate and run the project I headed back a few weeks later for the official opening of the Mamohato Centre. This was to be a huge event, attended by various local dignitaries as well as the King and Queen of Lesotho and Prince Harry. It was a showcase for many of the activities that children would take part at in the centre including HIV awareness, sports games and yes, photography! I was able to explain the project to many of the visiting guests, the King and Queen as well as Prince Harry (who was totally on-board). Prince Harry is a keen photographer and immediately got stuck into the sessions taking a photo of the King and Queen – not the more formal royal portrait I have been used to but great fun!

“The legacy of this project has always been integral to me, seeing the positive effect it had on the children made it important to me that it wasn’t a flash in the pan. Getty Images and Fuji have been fantastically supportive of the whole venture with Fuji even funding the project with film for the next year. Beyond this we are exploring ways to keen the children snapping well into the future!”

Supporting both the Corporate Philosophy of Fujifilm to enhance the quality of life of people worldwide and the overall goals of the Sentebale charity, the project provided the children with a unique and special opportunity to express themselves through photography. The instant nature of the cameras empowered the children with a sense of creativity, and gave them the chance to see their photos instantly.

The Lesotho Photo Project was launched during the first camp held at the Sentebale‚ Mamahoto Children’s Centre (the flagship facility that supports all of Sentebale’s work with vulnerable children) in October 2015. The Centre has continued to run the project at camps throughout the winter, including a session at the official opening in November 2015.  The children take part in photography lessons and use their instax prints to produce the Mamohato Times; a newspaper documenting their experiences at camp. This fantastic project provides a chance for the children to develop their creativity, communication and interpersonal skills, but most importantly have fun and express themselves in a unique and empowering way.