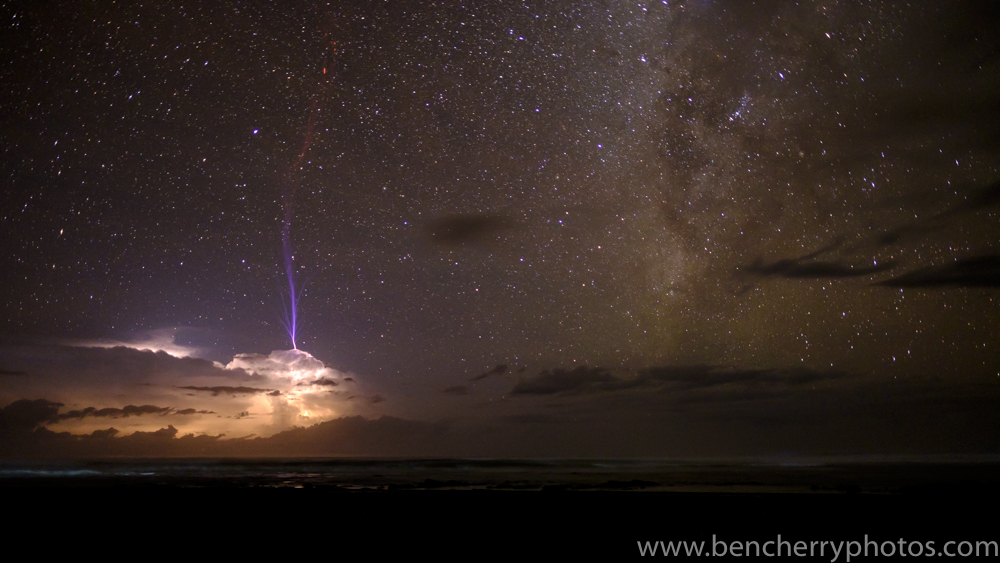 Lightning occurs all around the world, at different frequencies and strengths. I’ve been lucky enough experience a good few lightning storms, with my most memorable occurring in the tropics. But this isn’t to say that you can’t get great lightning shots wherever you are, all you need is some knowhow and then the lightning! Here is a brief 101 of lightning photography to get you started.

“It’s all about the light”

Like a flashgun, lightning is over in but a moment, and like flash if it is the predominant (or only) light source then it acts rather like its own shutter speed.
When using a flash at night for example, you might set the power output of the flash and then move to the camera settings. Generally speaking you turn the shutter speed to the maximum flash sync speed and then use ISO & aperture settings to compensate for the power of the flash. If it is too bright you increase the aperture and/or drop the ISO, if it is too dark then you do the opposite; much the same applies to lightning photography.
The intensity of the light from lightning is affected by two things:
The first is the power of the lightning: if it is a particularly large strike then if you’re set up for some previous strikes that weren’t as powerful, it’s more than likely the lightning will have blown out your highlights in the image.

The second thing to affect the light intensity is the distance between you and the lightning itself. Generally, lightning storms are large storm clouds which means that the lightning can be very close by one moment and then many miles away the next. These fluctuations in light can’t really be predicted but it is something to be aware of, and even to account for by increasing your aperture by a stop more than required to save your highlights.

Lightning is spectacular by itself but sometimes a scene can be made all the more special by being aware of your surroundings and looking for things that could add to the moment.
If you’re lucky enough to have something of interest in the foreground then see if you can add this to the electric scene. If there is still some ambient light around then you should be able to illuminate the foreground via your long exposure. If not, then illuminate using a torch or flash. This simple addition to the frame can help to better portray the scene. However bear in mind that you want to photograph as much of the lightning as possible so a sky-dominant frame will help to ensure this.

Built into many of the X-Series cameras, an intervalometer allows you take a set number of photos with pre-determined intervals between each shot, this is set by the photographer and can be between 1 second to 24 hours. This is very helpful for lightning photography as you can set the camera to take a series of 30 second exposures (or less if this is overexposed) and sooner or later you’ll capture a lightning strike within one of those frames.

The curse of photographing lightning is you can never guarantee where or when it will strike so you should always be prepared to wait a while for a good shot!  At the same time though, be aware of where the storm is moving to and adjust your composition if it is moving out of frame.

This really can make all the difference! Because the exposure changes so frequently due to the intensity of the lightning, you cannot always achieve the perfect exposure 100% of the time. A RAW file records so much information compared to a JPEG that you can recover many more files which have the highlights blown out according to the histogram.

If you come across a lightning storm during the daytime my method is to set up the aperture and ISO to the most light-demanding settings possible (e.g. F22 ISO 200) and then simply use the intervalometer to repeat the suitable shutter speed. It can produce some interesting results.

A little about Ben – Ben is an environmental photojournalist, zoologist and Fujifilm X-Photographer. His passion is showing the beauty and fragility of the natural world. Find more of his work at: