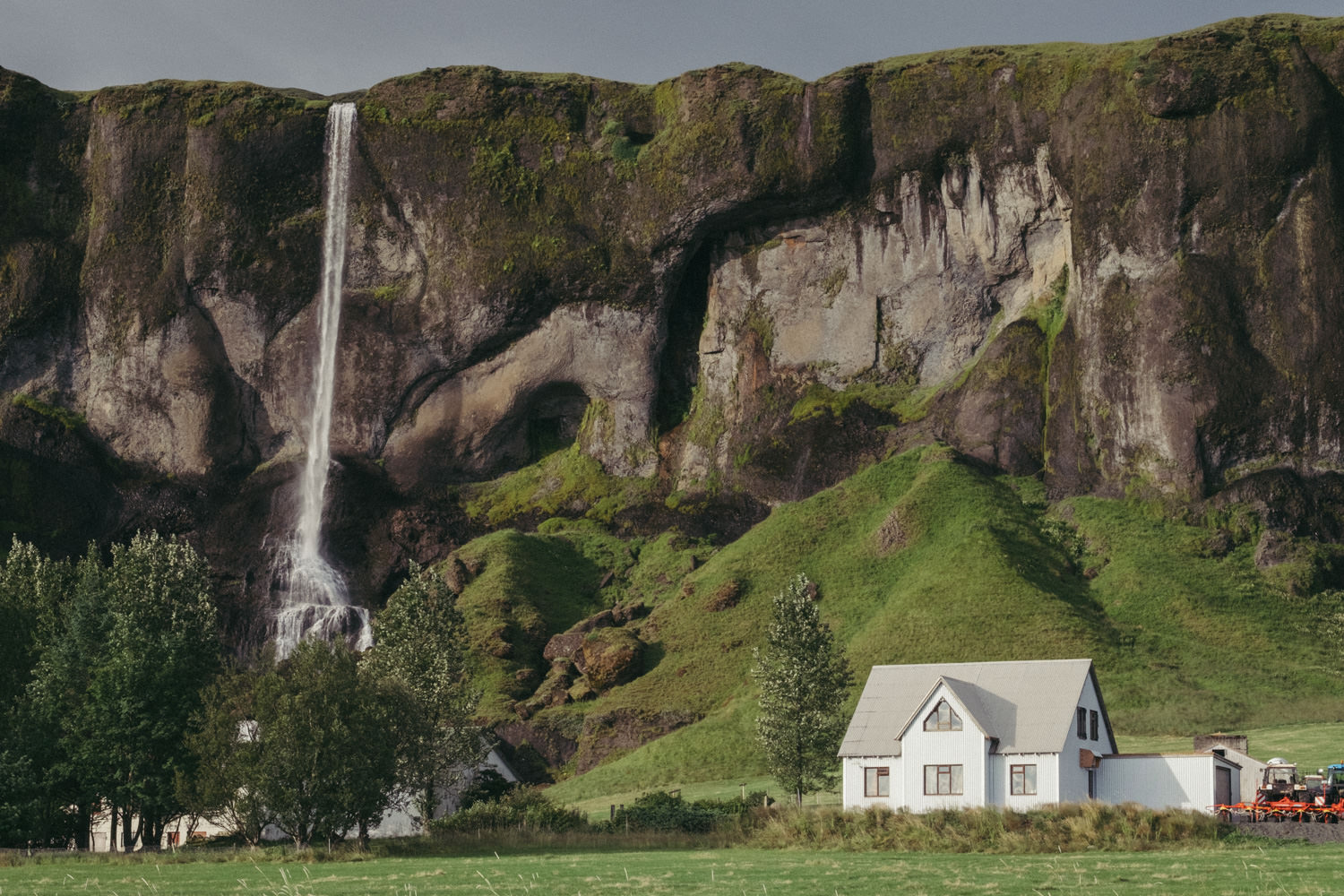 Part 2 of Danny Fernandez’ Icelandic adventure; it will inspire, teach and make you want to visit this beautiful country. If you missed part one, read it here.

The overall highlight (sorry if this is cheating) was the nature itself. The country is very varied in what it has to offer, and the scenery changes dramatically. You could start the day in rolling green hills, cross the icy snout of a glacier and pass moss covered lava fields in the space of a few hours. There are so many waterfalls, ranging from mighty to tiny. At one moment my girlfriend and I counted 25 waterfalls on the mountain facing us. I would consider it a good day if I saw just one waterfall, but on some days we probably saw more than 100.

I kinda of fell in love with the Icelandic horses. They are such beautiful creatures. They all seem to be very tame and friendly. At almost every chance, I would stop the car to get photos of them. I was desperate to get beautiful backlit photos during the golden hour, but unfortunately, that opportunity never arose.

There is no more sagacious animal than the Icelandic horse. He is stopped by neither snow, nor storm, nor impassable roads, nor rocks, glaciers, or anything. He is courageous, sober, and surefooted. He never makes a false step, never shies. If there is a river or fjord to cross (and we shall meet with many) you will see him plunge in at once, just as if he were amphibious, and gain the opposite bank.
— Jules Verne, A Journey to the Center of the Earth

Due to the geothermal activity, there are many natural hot springs and pools. We visited Seljavallalaug (one of the oldest outdoor pools in Iceland, built is 1923), which was spectacular. The pool is set in a picturesque valley next to a river. It takes a short trek to arrive there, but it is definitely worth visiting. Prepare to bathe in algae filled water as the pool is cleaned just once each summer.

On the second night of the trip, we were fortunate enough to witness the northern lights in Vik. This was an incredible experience. As I had only seen photos/time lapses of northern lights, I was surprised at how they move and dance across the sky. At times they were like the final whisps of a flame, in an attempt to stay alive, at other times they appeared to explode in the sky, spreading in all directions. The last scene of the spectacle looked like ten people flashing torches on the clouds, illuminating them as if the gods were having a party.

Skógafoss is one of the biggest waterfallls in Iceland (being 25m wide and 60m tall). We visited early in the morning and there was a rainbow fixed at the base of the waterfall. There is a walk which you can do to the top, which is well worth it. However, I thought the most impressive views were from the base.

About 9km from Skógafoss is a wreckage of an US Navy airplane which crashed in November 1973 (fortunately no one died). The remains of the plane can be found on Sólheimasandur black sand beach. Arriving to the location was a little difficult (without a 4×4) and we had to walk a few kms across a barren landscape to get there. We were blessed with sunny weather and really enjoyed exploring the wreckage (you can go inside it, which is a little eerie).

Jökulsárlón is a glacial lake where huge chunks of ice break off the Breiðamerkurjökull glacier and enter the Atlantic ocean. This place was phenomenal. We arrived just before sunset, and watched the sky turn red (contrasting the deep blues of the ice) as a thick mist rolled over the glacier and onto the lake. There were seals swimming in the water.

A short walk from Jökulsárlón is an area known as ‘Icy Beach’, which is where the lake actually meets the Atlantic. The lake and the ocean push huge lumps of ice around and many of them get washed up on the black volcanic sand. We spent a night and the following morning here and the icy sculptures are forever changing shape and being replaced.

I love the Eastern Fjords and we spent 2 days driving along them. The fjords are so vast, beautiful and peaceful. I think these were extra special to me as I had never seen a Fjord before. There is one town called Seyðisfjörður (population 665) which I particularly loved. It seems to have a strong artistic community there, with some galleries, public sculptures and beautiful walks. It’s the kind of place that makes me want to rent my flat out and spend a summer there.

We went whale watching in Húsavík, an extremely pretty fishing town. There are many species of whales and dolphin which visit the bay, and we were fortunate enough to have a humpback whale swimming around and under our boat for around 15 minutes. It was the closest I’ve ever been to a whale and was a very memorable experience (freezing cold though!).

Akureyri is Iceland’s second largest urban area as is located in the North of the island. When we drove into the city we were taken aback by seeing so many cars and people. We had come from days of driving through almost unpopulated landscapes and passing perhaps 10/20 people a day, to a city with traffic (albeit not much).

Our trip began and ended in Reykjavik. We spent out first and final 4 days there. Reykjavik is a very nice city, and we particularly enjoyed the many cute cafes. We didn’t experience the nightlife which is it renowned for, but heard it’s very good. I was really impressed by Harpa, a beautiful mirrored concert hall, and Hallgrimskirkja, a modernistic cathedral in centre of the city. We also enjoyed walking along the old fishing harbour and exploring the beautiful botanical gardens (with a nice little cafe in the middle of the gardens).

The country is extremely sparsely populated. According to Wiki ‘it has a population of 329,100 and an area of 103,000 km2 (40,000 sq mi), making it the most sparsely populated country in Europe.’ Bearing in mind that more than two-thirds of the population live in Reykjavik, when you leave the capital city, it’s gets very, very lonely.

I got the impression that nature seems to be the highest priority. It appears as if no river were diverted, or mountainside cut into, in order to accommodate humans. There seems to be a harmonious balance of humans living alongside the beautiful virgin nature of the country.

Being a witness to the untouched landscapes of Iceland was a unique experience: being able to see what the world may once have been like, before humans came and messed things up.

Iceland seems to be a good model for other countries:

‘Consistently rated the most peaceable of all countries in the world by the Global Peace Index, Iceland has reduced its military expenditure to zero, has no armed forces, and has reduced the inequality gap between rich and poor.’ -Scilla Elworthy

The Icelandic people are very jolly and most of their surnames end in ‘son’.

The names of places are mostly unpronounceable.“Eyjafjallajökull”. ‘Nuff said.

There are sheep everywhere (there are many more sheep than people). They often run across the road so you have to be very careful as you drive.

No one uses cash. In fact I only saw cash twice in 16 days. You can pay for everything by card.

Because of the lack of people, it was great to get out of the car and observe the silence.

Driving along, you can see many huge boulders that have fallen down the sides of mountains. These things can be huge – easily large enough to smash through a house or destroy a car.

Everything is very expensive (at least compared to Barcelona, where I live).

They eat all parts of animals (the least appetising being boiled sheep’s head and ram’s testicles). In Iceland, I was happy to be a vegetarian.

They have their own type of yoghurt (but it’s not actually a yoghurt) called Skyr, and it’s delicious.

There were many more obese people that I expected (which could be explained by their love of hotdogs and coca-cola). I didn’t see any vikings.

They seem to like good coffee and have many cute cafes with good cakes (at least in the cities).

On the way back from Iceland we had to stop over for a few hours in Oslo. Flying over Norway made me want to visit! The older I get, the more I realise my love for nature (perhaps as I’ve always lived in cities). I love forests and lakes and Norway seems to be full of them. I definitely want to experience the northern lights again, and they can be seen there.

Reflections on the trip.

I couldn’t give a higher recommendation than to visit Iceland, and think everyone should see it in their lives. It is unlike anywhere I have ever seen, and the beauty of the place is breathtaking. We were extremely lucky with the weather (it was sunny most days of our trip) and this made a huge difference to our experience. I would recommend visiting in the summer, but I imagine it would be equally as beautiful (but in a different way) during the winter (plus you would see the northern lights in the winter). It is an expensive trip, but it’s one which I will never, ever forget.