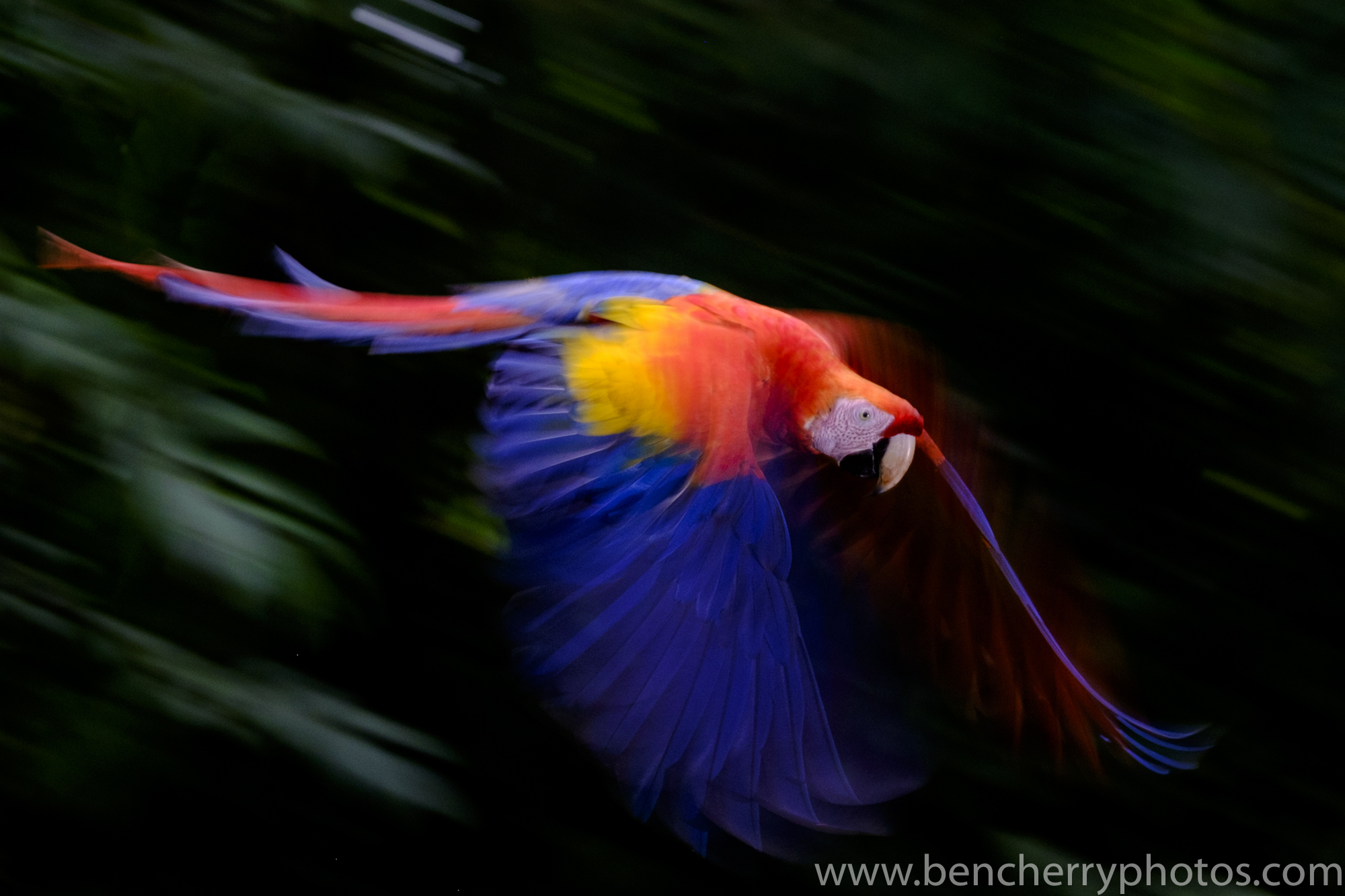 I am currently in the middle of a six-month research stint with the Wild Macaw Association, gathering data on a scarlet macaw population for a study in Costa Rica, associated with Gent University. This remarkable opportunity allows me to study these birds closely and to explore the surrounding area during our two daily treks. To find out more about this very successful project, in which 75 macaws were released from 2002-2012, please check out this link here.

Scarlet macaws are incredible birds, with their bright colours and quirky behaviour making them very photogenic. However, they are often found within the rainforest and this often means in dark conditions, too dark for even the XF50-140mm F2.8 and high ISOs to capture any sort of motion. This problem will sound familiar to many of you in different situations, where OIS is redundant as the problem is subject movement, not camera shake. There is however one way to get around this: add artificial light. It may not be suitable for some situations but with a little bit of time and understanding this can allow for that otherwise impossible shot.

Here is a video showing how I developed my flying macaw photographs.

For me, there are two reasons to add flash to an action situation; we’ll take a look at both of these in a little bit of detail.

You need more light to freeze the subject/scene

In other words you simply can’t get a sharp image without more light. This is the most common reason to switch to flash. Most will start with the popup flash on their cameras and/or then get a dedicated flash and mount it on the hotshoe of the camera. There are photographers who can produce exceptional images using just this simple technique, and if you have a TTL (through the lens metering) flash then this becomes relatively quick and simple as the camera will communicate with the camera how much flash output there should be. Generally this will be fine for most needs, especially if you are short of time and need to take a variety of photos.

If you do have a TTL flash and you haven’t experimented with manual flash outputs before I would highly recommend that you give it a go. This slows you down and makes you think more about what you want to produce – do you simply want the flash to give a little bit of fill light to an otherwise correctly exposed scene? Or would you rather the camera underexposes the scene while the flash exposes correctly, so bringing the focus onto your subject and away from the darker background? These are all fun things to play with.

This all sounds great but flash photography can drive you around the bend if you’re not careful. On current X-Series cameras the maximum flash sync is 1/180sec (except the X100 series because of a leaf shutter allowing 1/1000sec flash sync). Anything more than this will not allow proper flash input. When it comes to action 1/180sec is pretty slow! There is one flash currently available, the Nissin i40, which is different. It offers high-speed sync (HSS), which allows you to use the flash up to 1/4000 sec, this is certainly helpful when adding some fill flash but it does cut the overall output of the flash. The reason for the downgraded power in this mode is because the flash sends out a series of very high speed flashes (instead of one, more powerful flash) that are fast enough to expose the subject within the maximum shutter speeds.

If you want to freeze the subject and aren’t bothered by the background then what you want to do is find an exposure combination that creates a totally black image. For example 1/180sec (max sync), F11, ISO200 – a mix which should require too much light for a lot of scenes, thus leaving your image black/heavily under exposed. The next thing to do is to add the flash that will offer all the light on the subject. If your subject is moving quickly then you’ll want to cut the flash output, this sounds counterintuitive, but as you cut the light output say from 1/1 to ¼ then the flash time is four times faster than maximum 1/1 power. This ensures that the subject is completely frozen.

The scene isn’t dramatic enough so you add artificial light

Sometimes a scene just looks flat and no matter what you do images just don’t ‘pop’. This is where some creative artificial light can make an image. In the rainforest undergrowth this definitely applies, as apart from being really dark, there is generally very little direct sunlight so the light is muted. Some images where I panned with the subject came out ok, partly thanks to the wonderful colours of the birds, but I still felt that it need an extra something. This is where the aforementioned video shows the progression from initial photos to more dynamic, off-camera flash images.

There are countless blogs on creative use of artificial light and I’m not going to pretend that I am a flash master, instead I’m simply going to show the set up I ended up using and why.

First of all I love off-camera flash, it opens up so many more opportunities compared to simple on-camera flash (this is just my opinion and not fact). So I very quickly knew that for the image I had in mind, I needed to use flashes off camera. I experimented from backlighting the birds to using the two flashes one from each side and then from slap bang in front. But the combination that created the image I really wanted involved having both flashes to the right-hand side, where the bird was flying. One flash was in line with where the birds fly over, while the other was slightly around towards me so giving a bit of light onto the side of the face towards the camera. This gave sufficient light onto the face to freeze the detail (especially as the face is lighter than the body) but didn’t cast enough light onto the rest of the bird to freeze more detail so creating motion. Here is a sketch to indicate what I did.

There are two curtains in a flash exposure. The first curtain reveals the sensor to the light coming through the lens and then the second that closes the sensor to light, completing the exposure. This is important to understand as it can greatly affect how you use flash.

Where the flash is triggered as the first curtain opens. This is the most common set up, where your main priority is the flash. The go-to set up unless you’re using slightly slow shutter speeds with subjects or moving lights. It captures the exact action that you press the shutter to capture, if you use second curtain/slow sync then you could miss the split-second moment you were hoping to catch.

As the second curtain is about to come up and finish the exposure the flash fires making it effectively the last light to hit the sensor. This method does send off a flash initially to get a meter reading if used in aperture priority mode (no meter flash in manual mode). I generally avoid this method as it can give weird results (see video).

Slow sync is only available in aperture priority/auto-shutter speed modes, generally it is the same as second curtain flash but without the disruptive initial metering flash (note that it can only go down to 1/8sec). This is my favorite option for any kind of action photography and is the method I used for the panning images. The reason why this works best is it lets the ambient light reach the sensor first; correctly exposing the background and THEN the flash is triggered reaching and freezing the subject. This is preferential for panning/slow shutter speeds because it prevents ghosting – where the subject is flashed and but there is time afterwards for some light to reach the subject and any subject movement creates a bit of a psychedelic feel!

There concludes a rough/quick break down of different flash curtain types for the X-Series. To summarise there are a number of ways you can use flash to help your action photography:

I hope that gives you a little bit of inspiration to get out there and try your hand at creative flash photography.

If you’d like to find out more about the Wild Macaw Association project or even donate to keep the project running then please check it out here – http://www.tiskita.com/macaw-conservation/