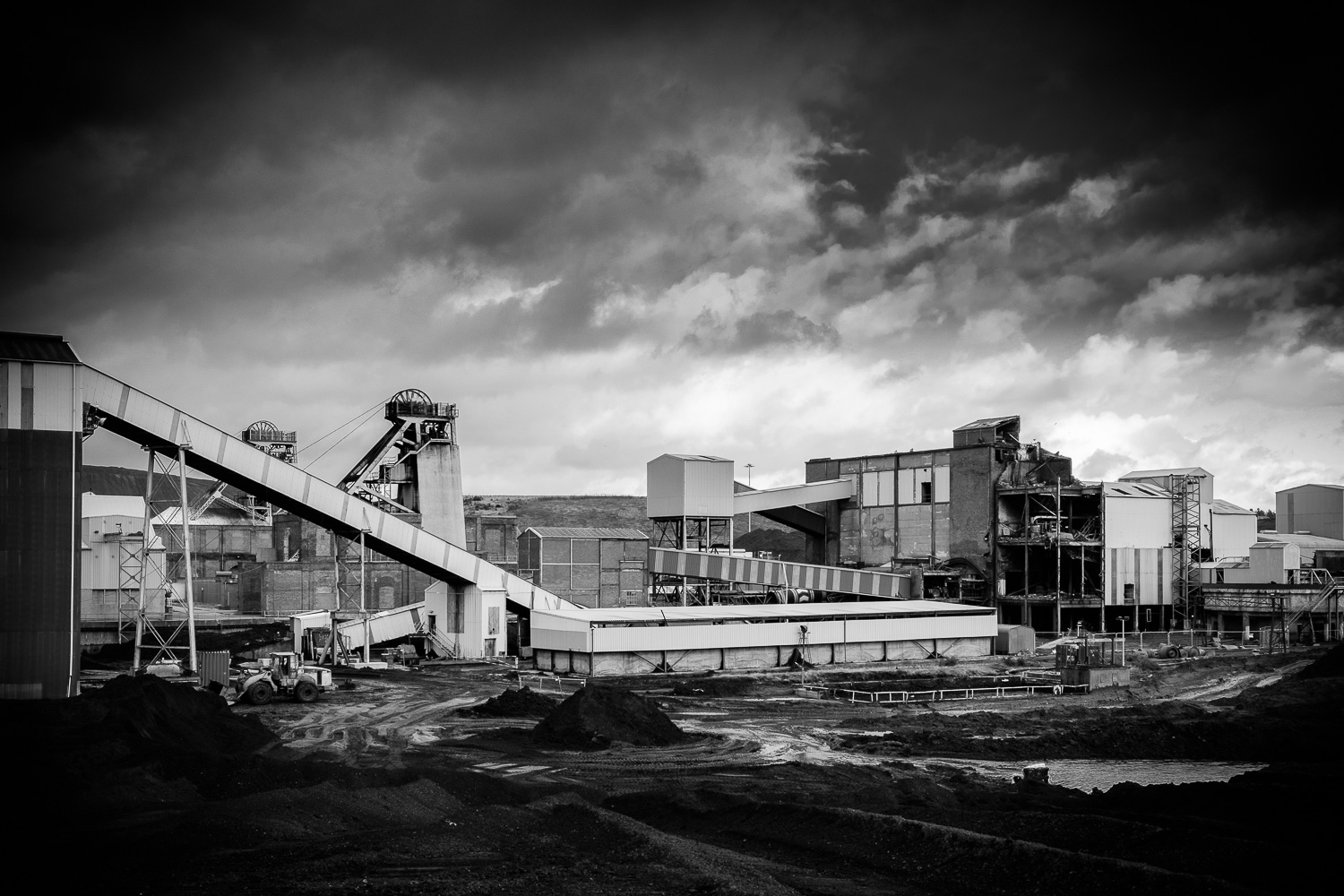 The pit opened in 1925 and over the years has employed tens of thousands of local people. It was one of 46 coalmines in Nottinghamshire, which supplied more than 14 million tonnes of coal per year at their peak in the early 1960s.

The first two shafts were sunk to 690m in 1925 and subsequently deepened in the 1950s to the current pit bottom at around 900m depth.

Thoresby Colliery was the first to have fully mechanised coal production and also the first to achieve an annual saleable output of more than a million tons, it became a star performer in the British coal mining industry.

In the late 1980s it raised output to exceed 2 million tons, regularly smashing it’s production records, and the colliery became known as the Jewel in the crown of Nottinghamshire mines. A crown sits proudly on the headstocks in recognition of this achievement.

When the coal industry was nationalised in 1947 it employed a million men at 1,503 pits; prior to the miners’ strike in 1984, there were 180,000 miners at 170 pits. Today there are just two deep mines left, employing about 5,000 men, at Thoresby and Kellingley in Yorkshire. Kellingley will suffer the same fate as Thoresby and closes in the autumn.

UK Coal say market pressures have led to the closure of Thoresby Colliery. Coal generates more than a third of Britain’s electricity, but it is cheaper to import coal from countries such as Russia, South Africa and Colombia than to mine it in the UK.

For the past few months I have been recording the colliery, it’s buildings, plant and people for posterity. It was my aim to create a comprehensive record of the pit at a specific point in time immediately prior to its closure.

It was a chance conversation after giving a camera club lecture that started the ball rolling. A chap in the audience worked at Thoresby and was unfortunately in the first wave of redundancies. He asked if I would be interested in visiting the colliery to take a few pictures. It was a fantastic opportunity and I jumped at the chance. He put me in touch with the Health and Safety manager, I explained what I would like to do and we were off and running. It was at this point, after I had gained their agreement to document the colliery, that the full extent of the task dawned on me.

I visited the colliery on seven occasions, at different times of day, in different lighting conditions, including dawn and dusk. I planned each shoot but found that an outline plan whilst retaining a degree of flexibility to react to opportunities worked best.

At the outset I just toured the site to give me an understanding of the buildings, the machinery, the operation and the people. I took snaps to create a digital scrapbook to help me plan my approach. Essentially I was imbibing the atmosphere much as I would do when visiting a foreign destination for the first time. I wanted to get a real feeling for the place before I started the photography in earnest.

Health & Safety manager Grant was so supportive of my visits giving me more time than I could have wished for.  Even coming in at 3.30am for a dawn shoot and returning to work late in the evening to get “the best of the light” didn’t diminish his enthusiasm. In fact he joked that, after watching me, he would now be able to take the best holiday snaps ever! I hope he does.

For my portraits, the unobtrusive Fuji equipment allowed me to concentrate on building a rapport with my subjects rather than intimidate them with a large DSLR and f2.8 lens combination. Miners might be tough guy’s and supermodels they certainly are not but they seemed to relax pretty quickly in front of my Fuji lenses.

There were several challenges to overcome not least the light levels that were typically pretty low in all of the buildings. Because of the poor light I used a tripod fitted with a ball and socket head for as many shots as possible. My cameras are fitted with arca swiss type plates so that I can switch from landscape format to portrait very easily and without having to waste time readjusting the tripod.

The mix of different light sources from tungsten, to fluorescent and natural meant it was difficult to assess the ideal colour temperature. However the decision early on to convert all the images to black & white certainly helped counter that problem!

In a coal mine dust was another inevitable and unavoidable issue. As the miners told me it’s not only the dust you can see that is the problem and I was very careful when changing lenses and using two bodies certainly helped. Thankfully the in camera sensor cleaning worked well and I was pleasantly surprised at the minimum amount of dust spotting required.

Working on a project

As my photography has progressed I have found that I prefer to look at a series of images that tell a story rather than seeing individual impactful pictures. Whilst I have adopted this storytelling approach in my travel and landscape photography this project was a whole different ballgame. This wasn’t going to be a six or ten image set but a large body of work that had to be planned and created in a certain style. I found this experience fascinating, though at first it was pretty daunting. However after a couple of visits I had captured some shots I was very pleased with and the plan started to fall into place. I think the discipline required in a project such as this has helped me to improve my photography and it felt good to be succeeding in this new genre of social documentary photography.

In an attempt to capture the “feel” of the colliery, and to bring completeness to the project, I also recorded various sounds around the pit and organised a series of interviews with miners past and present. I will be producing mini AV’s including these sounds and using the miner’s comments in my presentations.

It is very easy to stick to what we know in photography and limit yourself to a particular genre. Whilst my experience as a travel photographer, where you are required to be adept at many different genres, undoubtedly helped me there were aspects of this project that were not so familiar. As a result I feel I have grown as a photographer and I would urge you to move out of your comfort zone and try something new. There will be similar opportunities in your area, seek and ye shall find!

Capturing a piece of history

As I progressed through the project I realised that I was not only taking pictures for myself but that I was actually recording a piece of history, an enduring record of a place that, in just a few months time, would be gone forever. With that came a feeling of responsibility, not only to do myself justice but also to represent the life and work of the mining community. Apart from my family photographs, this project is the most important and worthwhile piece of work that I have ever created. Whilst there is clearly interest in the work now, what will its importance be in another 10 or 20 years?

This project has been a fantastic experience. It has improved my photography, taken me into a different genre and enlightened my knowledge of an otherwise mysterious industry.

It has been a pleasure to work with the team at Thoresby, without whom I would not have been able to produce this body of work. Whilst the colliery may not draw its workers from the immediate village area, as in years gone by, their camaraderie, team spirit, hard work and no nonsense attitude in this tough and uncompromising industry epitomise the best of British workers. The closure of Thoresby truly is the end of an era.

I feel it is important to showcase my images to as wide an audience as possible, especially in the local area. Therefore, after securing feature in the local and national press, I will be staging a major exhibition in Nottinghamshire and am planning to produce a book – more details to follow.

To see more Thoresby images and to keep updated on the project developments please visit my website  www.chrisuptonphotography.com