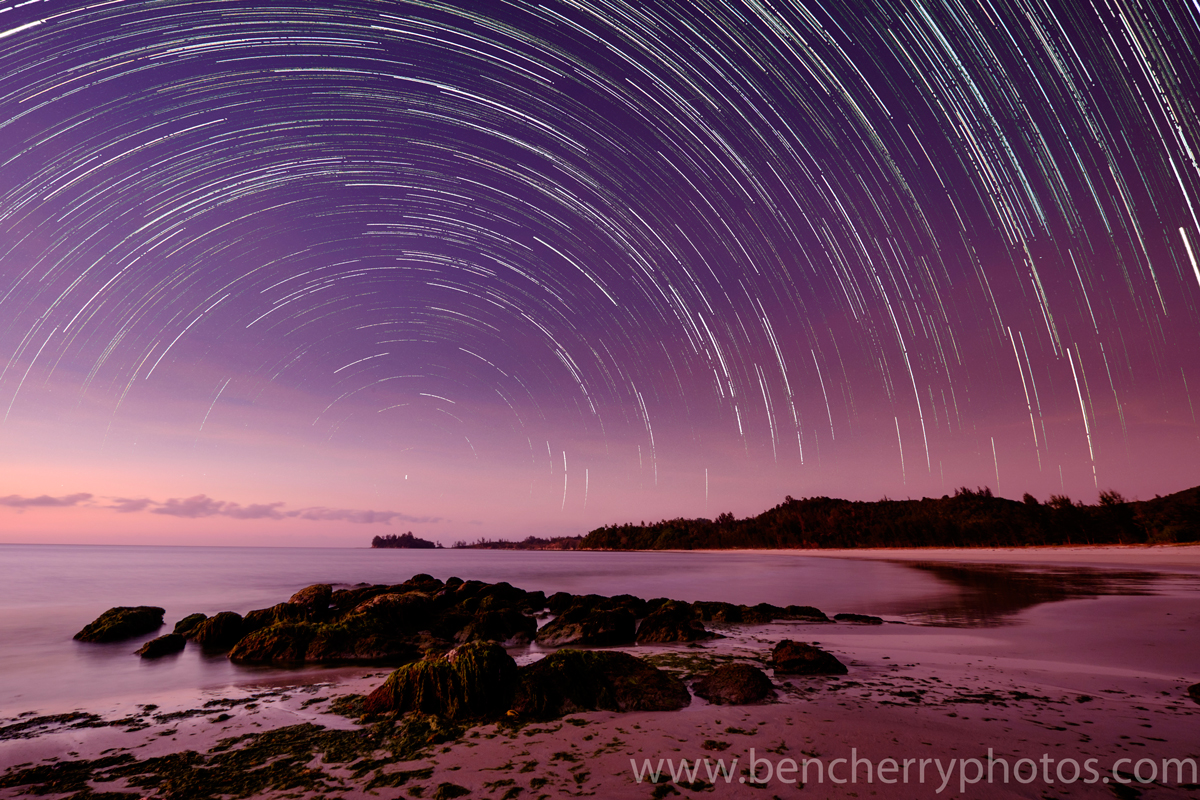 I have longed to try my hand at star trails for many years, and for one reason or another there would always be an excuse as to why I didn’t try it. Finally, all the factors came together to allow me to give it a proper go. With star trail photography you 100% have to know what you’re doing, I say this because if you’re ‘experimenting’ and don’t fully understand the factors involved then more than likely you will waste many hours getting cold in the dark and come back with nothing!

There are numerous tutorials out there which are comprehensive and will help you understand the fundamentals. One article I would definitely recommend is by Floris Van Breugel.

This blog is going to breeze over the general set up and workflow of putting together star trails. Just to make it clear I am not an expert astrophotographer but if you want to create an image similar to the one above then this might be helpful. So lets get started!

As I mentioned before, preparation is key to getting really rewarding results. I really recommend you read the article above and also do some things which can really make your life easier – such as the brilliant Star Chart app for your smart phone or tablet. This app gives you a map of the starts, which is particularly helpful if you know nothing about the stars (like me) and want to find polaris, the north star (if you’re in the northern hemisphere). The reason why you want to find polaris is that it is the centre point for the stars rotation, so effectively the stars are rotating around it.

Camera (obviously), preferably one that is compatible with a remote which has an intervalometer built in, or use a camera like the X-T1 which has one built in. An intervalometer is a device that can control your camera to take pictures at set intervals for a set number of photos and sometimes for a set duration. This is VERY helpful as it means that you can set up your shot and leave your camera to take all the photos for the duration of the shoot without any further input from yourself. From there you’ll usually want to use a wide-angle lens to capture as much of the sky as possible. Finally you need a sturdy platform to leave your camera, more often than not a good tripod (however I have managed to produce some shots using a gorilla pod too!).

Hopefully you have found a suitable location, ideally with little light pollution, on a relatively clear night (with a good forecast). Foreground is what makes a star trail photo different from all the other star trails, so really think about you composition and how you want the star rotation to affect your photo, whether you want to have polaris in the picture to have a centre point for the stars to move around, or whether you want to shoot away from polaris to exaggerate the star movements.

This wants to be done all before sunset happens. Choose your location, frame your image and then don’t change it, leave it on the tripod! Over the next hour or so take a selection of sunset photos, preferably with F8/11 to give you a large depth of field, which you won’t be able to shoot later. If you really want to cover all the bases then you can do some bracketing to make sure you have every part of your composition correctly exposed.

As the stars start to come out you can then set up your camera for star photography. I used an X-T1 and a XF10-24mm F4 OIS for the top photo. I set it up to shoot a series of 30 second exposures at F4, ISO1600. 30 seconds is the longest that you can run with the built in intervalometer, ideally you would shoot longer exposures so you didn’t have so many photos to merge later, but this is often the easiest way.

A few hours later and I stopped the camera and downloaded the shots.

This is where it gets quite interesting and fun, now that you have the shots you can experiment to see what works best for you. I downloaded all the images into Lightroom and selected all of the star-focused images and ran a preset on them which boosted the highlights to make the stars brighter. This helps to make the star trails that much brighter. Don’t worry about the rest of the content in the star images as this will be replaced by the earlier landscape image. Once the images were all ready to be blended together, I exported them as high resolution jpegs.

I then opened Photoshop and used a script made by Floris Van Breugel which you can find here. Go to File -> Scripts -> browse -> select the script (I used the flat version instead of the layered version as my computer couldn’t cope with the layered version!), then select the folder where you’ve exported the star images. These must be named in a sequence e.g. star image 1.. The script effectively blends the images together taking the brightest part of all of the images and bringing it forward. What you will end up with is something like this.

Notice that there is some ambient light, the lights on the water are from fishing boats and the green glow is from a few houses on the other side of the headland. To remove these lights I opened up the original landscape photo shown earlier on. I copied the original file (background) and placed it above the inserted landscape photo. Using a mask layer I then removed the lights using the brush tool which acts like a non-destructive eraser making the landscape photo come out above the background copy (I really hope this makes sense!). You can adjust how effective this is by adjusting the opacity of the brush, this is helpful when removing light pollution in the sky.

I hope that made sense and that you’ll go out and try your hand at star trail photography. If you manage any star trails then share them with us.