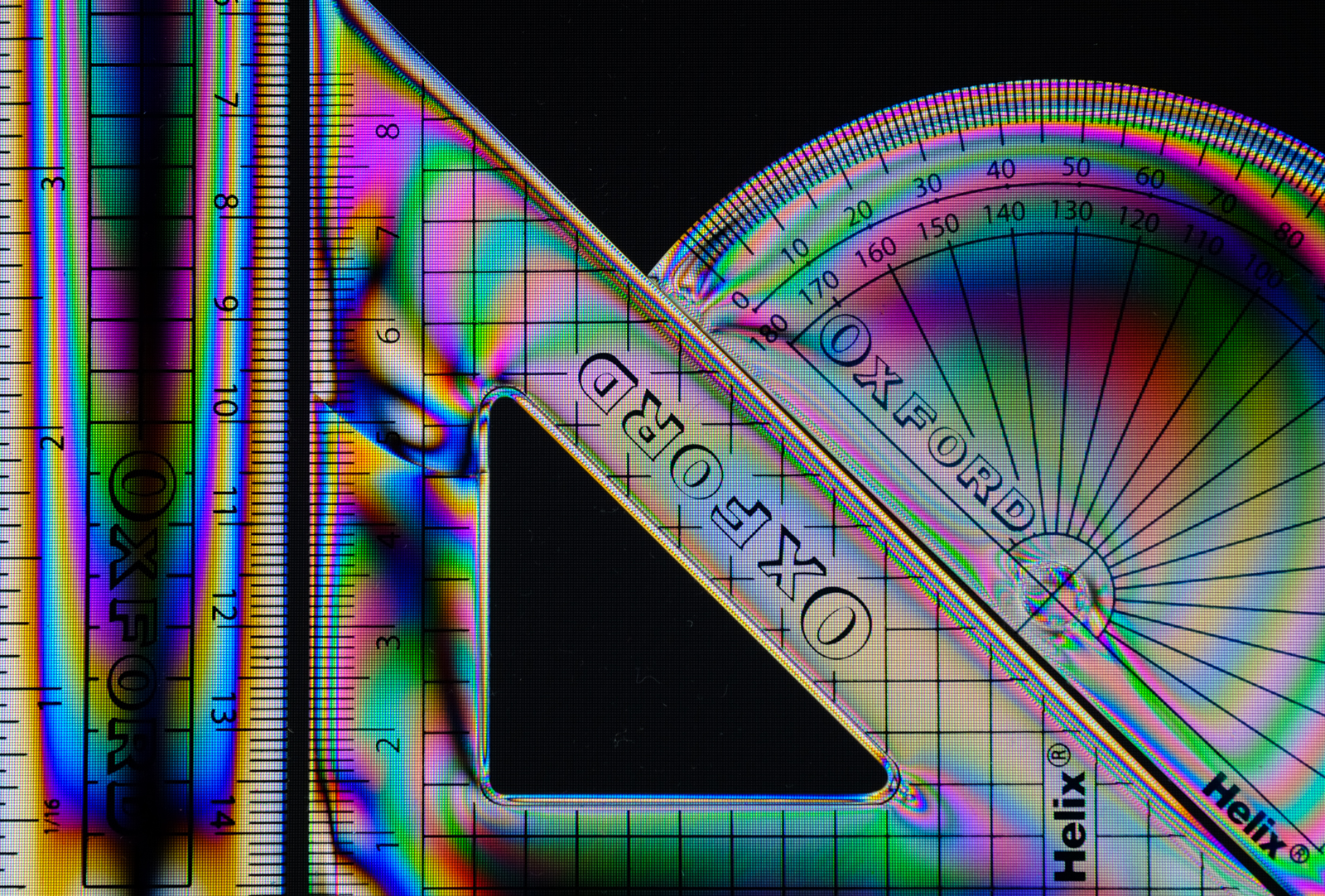 This colourful effect is known as cross polarisation and the good news is, it’s incredibly easy to do. In the days of film, this technique would have regularly required sheets of polarising film placed behind the subject and a polarising filter on the camera. Now, all you need is a polarising filter, a computer screen and a plastic geometry set. Here’s how it’s done:

1 As mentioned, the pre-requisite parts are a geometry set (we pushed the Fujifilm budget to the limit spending £1.59 on this one), a polarising filter and a computer screen. It isn’t essential that the filter is the correct size for the lens you’re using – just as long as it covers the front element. I used the super-sharp XF60mm macro for these image, but didn’t have a 39mm filter, so I just used a 72mm one instead.

2 All these shots were taken with the X-T1, which I set to aperture-priority, ISO 200 and spot metering. The camera was tripod mounted and positioned directly in front of the screen.

3 The computer background needs to be white. As I was using an Apple Mac, I did this through the System Preferences window. With the background white, I positioned the pieces from the geometry set directly on the computer screen in the order I wanted them.

4 Here’s the magic bit! Put the polarising filter in front of the lens and slowly rotate it, as you do, you’ll see the screen turn grey, then black. As this happens, the vibrant colours in the plastic will appear. Make sure you spot meter from the plastic, not the black background and you’ll get a result like this.

5 Once you’ve perfected the technique, you can start getting creative. Here are a couple of extra shots of individual pieces from the set where I cropped in in post-production.

There is a ‘sweet spot’ when you’re turning the polarising filter, make sure you experiment so you get a pure black background, otherwise you’ll end up with a less-appealing grey as you see here.

Use the Velvia Film Simulation mode for really vibrant colours.

On some screens, when you find the optimum position for the polarising filter, small white dots will appear in the background. These may disappear when you spot meter accurately, but if they don’t you can get rid of them by boost the blacks in post production.

We’d advise you to buy a new geometry set rather than using an old one, which will almost certainly be covered in scratches and will dilute the effect. Besides, everyone needs a protractor, right?