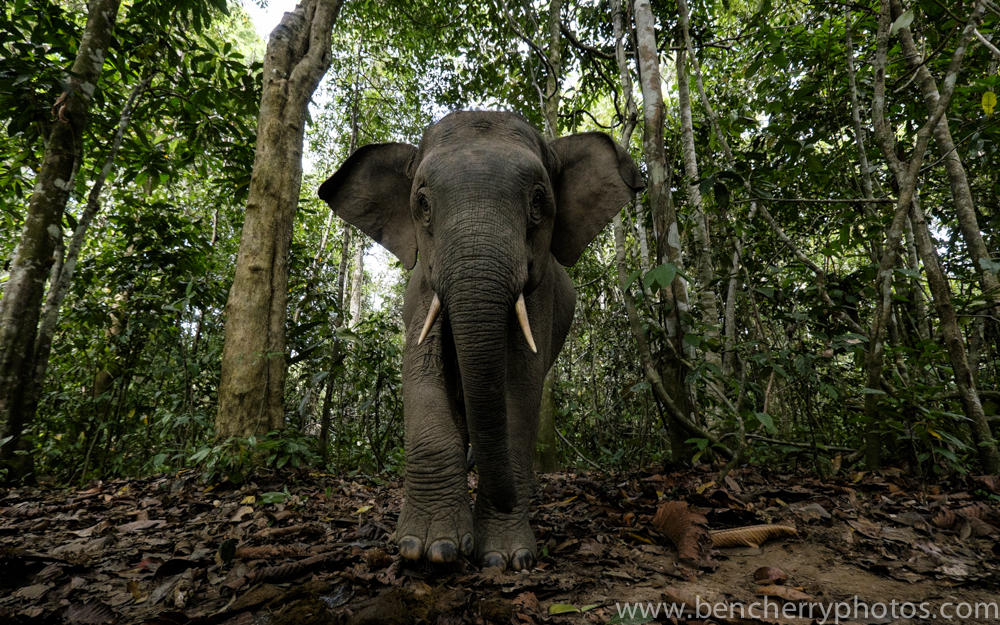 Pygmy elephants are endemic to the island of Borneo, famous for their slightly smaller size, they are endangered with a population of roughly 1,500 left in the wild. This species is increasingly vulnerable to human impacts as a result of deforestation and conflict with palm oil development. They are the least understood elephant and in my opinion the sweetest, with their oversized ears and long tail to keep them cool and usher away insects.
Our first encounter was through an opening where there were about twenty elephants grazing. Our presence obviously wasn’t too big a concern as we were still observing different behaviour which is only seen in relaxed environments, such as play fighting and suckling.
We moved on in our boat and headed around to a more suitable location and the view that greeted us was unbelievable!

I didn’t think the XF16mm would get much work but I was wrong. Having that mounted on one X-T1 and the XF50-140mm on another, sometimes switching to the XF16-55mm too, made for a brilliant set up.

One set up that proved to really work was the XF10-24mm and the X-T1 on a monopod fired via wireless triggers. Using the electronic shutter mode meant that I could have the camera really close to the elephants with no sound being produced so they stayed nice and calm. I couldn’t have done this with an SLR or in mechanical shutter mode. Using that set up on a monopod meant that I could shoot from a really low (or high) angle and still stay on my feet incase I needed to move. The tilting screen meant that I could see exactly what was in the frame and I used continuous auto focus as I trusted it to keep the focus on the subject. the wide perspective really worked well with these large animals, they may be called pygmy elephants but the adults still stand 2.5 meters tall! The other advantage of this lens was the OIS which worked fantastically. Considering I was holding the camera on the end of a 1.5 meter poll, in a busy environment and still getting sharp photos at 1/60sec is a testament to the OIS.
However when the conditions were particularly gloomy and I didn’t want to push the camera past ISO3200 (ISO6400 is fine but on this occasion I decided not to) I switched to the ever-present XF16mm and utilised the F1.4 aperture. Though the angle of view was much narrower the benefit of the faster shutter speed was huge. This was particularly important as when the sun was shinning it would often create very strong dappled light which would often result in blown highlights. As a result the best results were usually from overcast conditions as it meant that everything was correctly exposed, but this meant there was less light available.
To get some close ups I used the ever-present XF50-140mm utilising the wonderful sharpness at F2.8.
This was a truly incredible experience, one that I will never forget and I am so pleased that the X-Series produced photos to do the interactions justice. From the XF50-140mm to the XF10-24mm, the Fujinon lenses were exceptional across the range. We were even lucky enough to see the elephants beside a river just as the evening light reached its vivid climax.
I hope you have enjoyed this series of photos, let me know your thoughts. The X-Series is developing into a great, lightweight wildlife system, I can’t wait for the forecasted XF100-400mm to complete this fantastic system!
You can find more of my work via the following links: Website, Facebook, Twitter, Instagram.