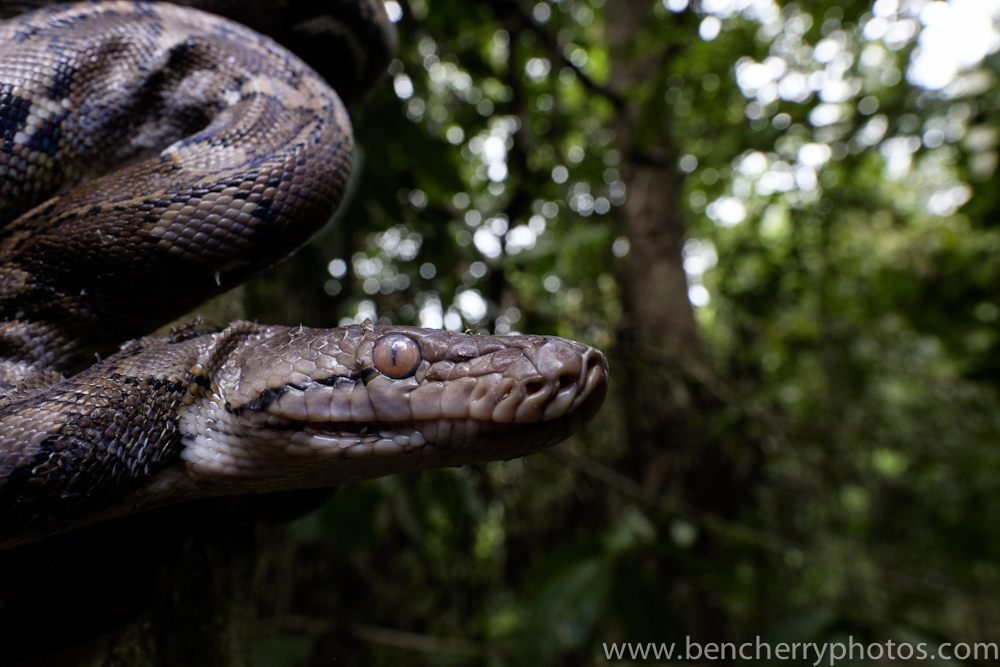 I have been lucky enough to be using a prototype of the XF16mm F1.4 since March and I have to say it is brilliant. I wasn’t entirely sure what I’d end up using it for, but as it turns out it is an extremely flexible lens and helped to produce some shots that would otherwise have not been possible.

This particular story has a bit of an unusual beginning. The location is the Kinabatangan River, Sabah, Malaysia, I was in this region with another photographer, Christian Loader from Scubazoo who I’m currently doing some work with. I have to thank Christian for some of the photos of me here. One morning, we headed up river briefly as our guide Osmon wanted to show us something he had spotted the previous night. We slowed underneath some low lying branches. Before I knew what had happened we had come across a relatively young python and… it fell in the boat! At which point I almost jumped out, much to the amusement of the other two who have handled snakes extensively before. The snake then decided to snuggle up to my Millican Dave camera bag! They calmly caught it and we relocated it inside the forest on a nice tree branch, in return it kindly sat still allowing us to take some pictures.

The close focusing capabilities of this lens really impressed me and allowed me to get some really close wide-angle shots, allowing me to fill the frame with the python and to also capture the environment.

I used the X-T1 with the XF16mm F1.4 attached as well as a Nissin i40 flash I used a rogue flash bender. But because this would involve getting very close to the snake I decided to put the camera on a monopod and used a wireless trigger set up to keep me working at a safe distance. To stress, the snake was absolutely fine and did not once try and strike the set up. The angled screen on the X-T1 was very helpful here as it meant that I could see exactly what was in the frame, regardless of slight angle changes to composition.

Because I was using the i40 flash in TTL mode, I couldn’t shoot above 1/180sec so I had to stop down to F8 for much of the photos. The location was very dark and flat as the vast majority of the tropical sunlight is absorbed by the canopy above. Thankfully the XF16mm seems to have very quick and accurate autofocus, even in these less than ideal conditions.

In an up and coming blog I’ll show the benefit of the F1.4 aperture when photographing Pygmy Elephants.