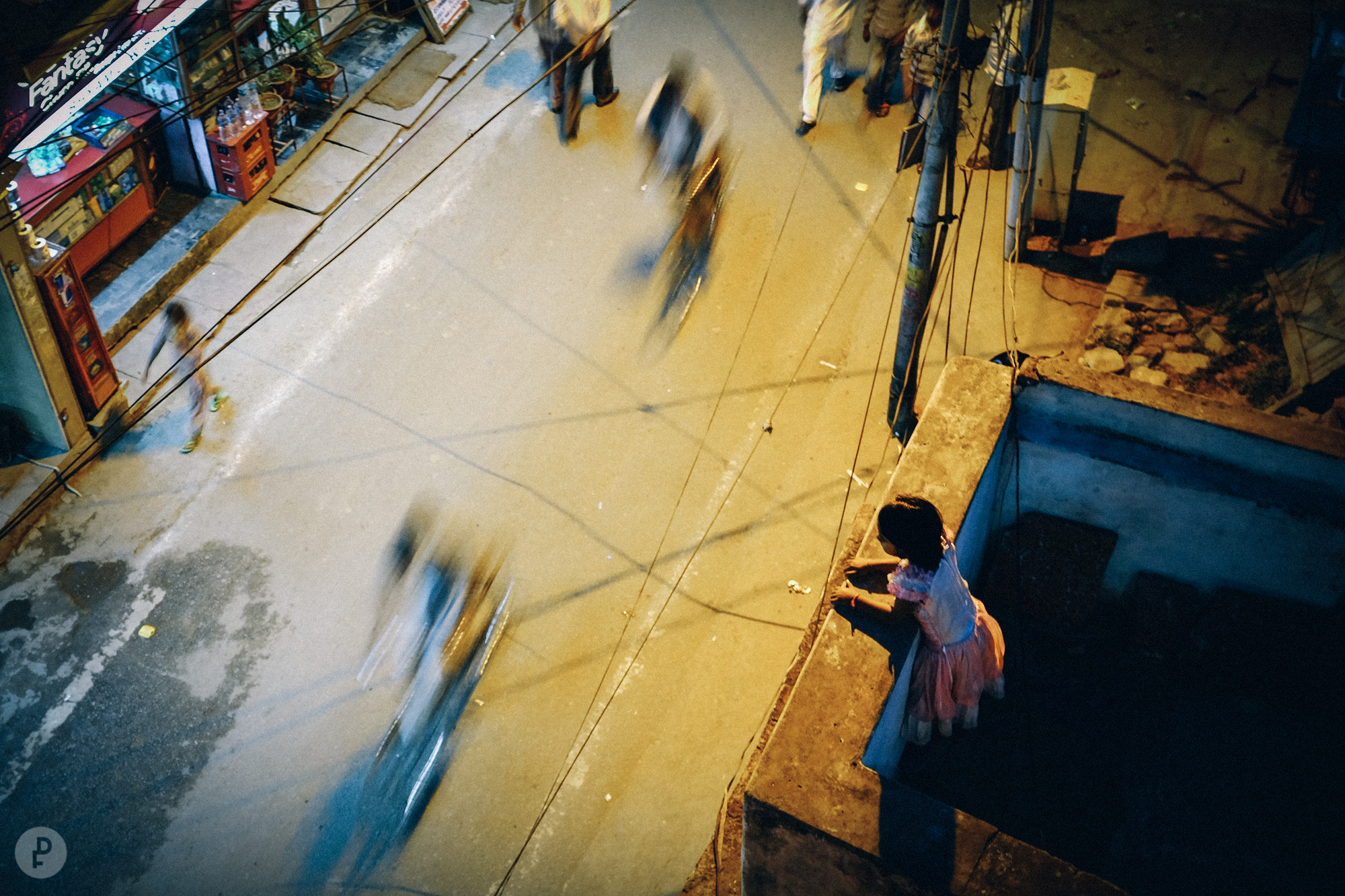 As dusk settled a new side of Agra began to come alive. The thick air was filled with the incessant sounds of rickshaw horns, and the buzzing of electricity from the network of power cables which decorated the streets.

The roads, which had previously been a high contrast haze of burning light had cooled, and become illuminated by florescent shop signs and orange street lamps.

It was the end of an incredible day spent exploring the Taj Mahal and Agra. I was exhausted after spending the day walking around in the sweltering heat, and had 2 hours left before catching my train back to Delhi. So I decided to do what any normal Englishman would do – stop for a cheeky beer.

I began looking for a bar, and before long walked past one with a man standing outside. The man had an incredibly friendly face, and I stopped to ask if I could take his photo. He told me that I could, on the condition that I come inside and buy something from his bar. It was a win-win situation.

The bar had a rooftop with a view of the Taj Mahal in the distant background. There were children on neighbouring rooftops fighting kites. The man and I exchanged conversation for the duration of a few beers. His benevolent disposition which initially drew me to the bar did not disappoint, as he entertained me with stories of his family and his love for India. At one point I asked him if he would like to live in another country, and he simply answered “Why?”. For him, India was the greatest place on earth.

As the light faded from the sky, our conversation was interrupted by the sounds of blaring music. I walked over to the ledge of the rooftop and saw trucks, which had been elaborately decorated with enormous chrome horns, blasting music at a deafening level. The man told me that today was a special festival in Agra.

I stood there watching and decided to start taking photos. The mixture of ambient light, combined with the twilight of the sky was beautiful. For my 3 month trip backpacking India, I was travelling light – my main camera being an Fuji X100s. I set it up on the wall of the rooftop on a Manfrotto Pixi mini tripod and started shooting. I wanted to capture the energy of the street so set a slow shutter speed to capture the movement. The auto white balance on the X100s worked amazingly well.

After a few minutes a young girl appeared on a rooftop below me.

She walked to the wall of her rooftop and stood there, gently observing the life on the streets. She was unaware of my presence as a picture unfolded in my viewfinder.

There was a beautiful contrast between the peacefully still young girl and the noisy and fast life on the street that was passing beneath her. I wanted to capture the contrast, so again choose to use a shutter speed of 1/8 second to get a slight motion blur of the passers by, while freezing her in her graceful stance. I began shooting, and after a few frames she rested both of her arms on the wall at the same time two cyclists passed by. I fired and got my shot.

Danny Fernandez is a creative photographer living and working in Barcelona. He likes cycling, records and vegetarian food.
To see more of his work, visit Danny Fernandez’s official website here or follow him on Flickr