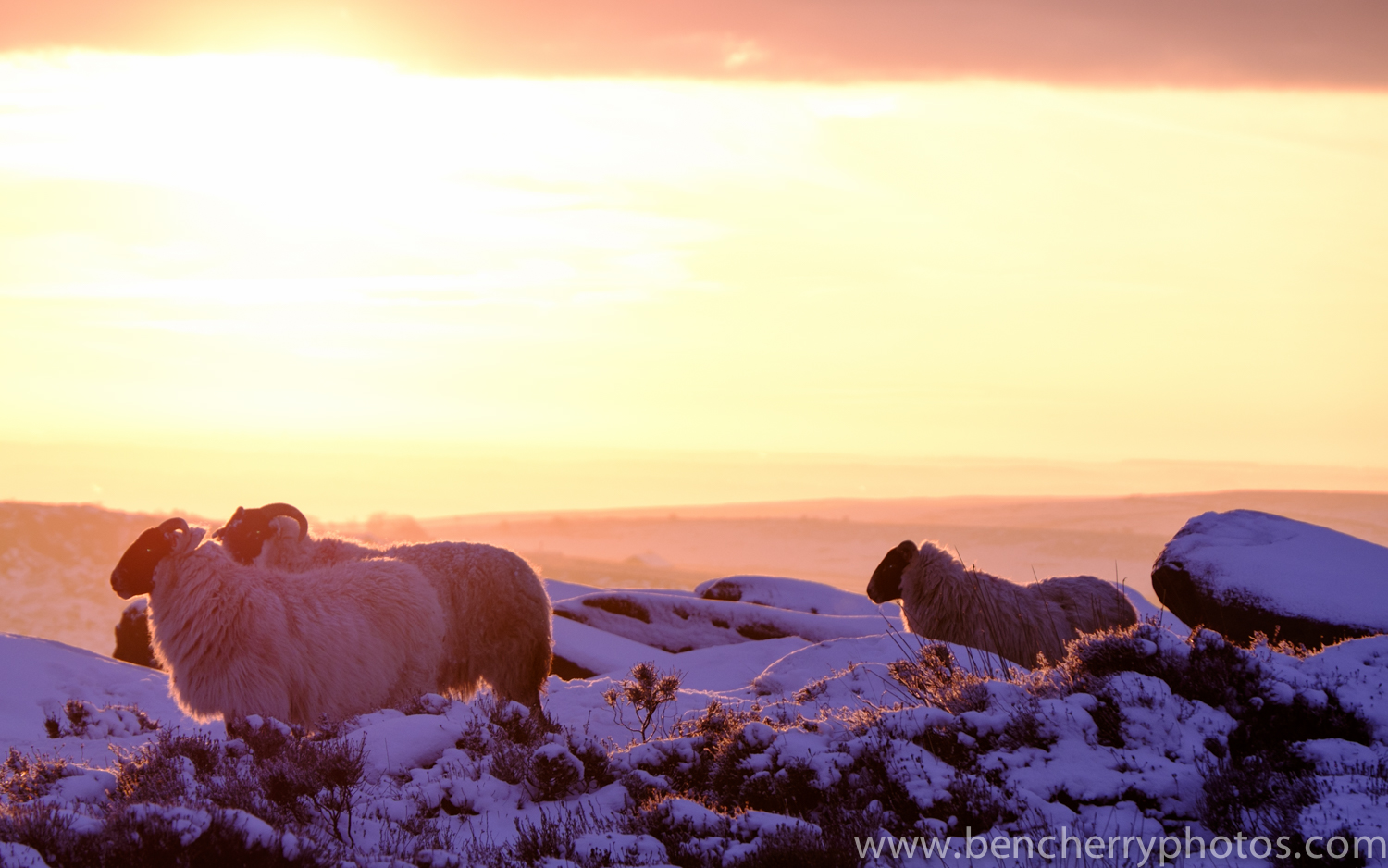 This story started out with a glance at the forecast the night before. With heavy fog and cold, mirky conditions on the table I had to at least try and get out in the early hours and capture these often photogenic conditions. Though Curbar Edge is very convenient for me to get to in the Peak District, I was beginning to feel like a one trick pony so decided to head over to a hill called Higgar Tor, which has lots of beautiful rock formations and a great view. Thankfully the main roads were well gritted and there is a car park very close to the hillside so my journey to the top of the hill was pretty straight forward, which is just as well as I arrived just the sun had come up, above the horizon… Funnily enough, there was hardly any fog and the sky was quickly clearing and it was turning into quite a spectacle.

I was not alone at the top of this seemingly lonely mountain though, there were two other photographer’s who were already there and in the prime positions for the sunrise. To avoid breaking the unwritten code of standing in front of another photographers shot, I had a little think to myself on how to approach the situation. While scouting around I came across a small herd of sheep, which seemed to have adapted well to the wintery conditions, as if their white coats were designed for this all along! As soon as I saw them I decided to use them as my main subjects for the morning.

Without a subject, I find it quite difficult to connect with landscape pictures, so having the sheep to focus on helped me focus on how to do the beautifully unravelling situation justice.

Since I had the Nissin i40 flash in my bag I decided to give it a go in the challenging conditions with the X-T1 and the 18-135mm lens. It quickly turned very bright and made the little flash work hard, which did result in relatively slow refresh times, but this could have been due to some slightly older batteries in it. What I wanted to do was to use the flash to give the sheep a tiny bit of definition in the part shaded from the sun. I deliberately moved so sheep were initially between me and the rising sun.

Now it may not look like the flash was used here, but if you look closely, particularly at the left front sheep’s eye then you can see a little glint. That was from the flash. I had the exposure compensation down a notch or two to try and retain a bit of the sky, otherwise it would have burnt out, as at that moment in time I wasn’t using any filters. The flash was on 0 exposure compensation and I attached the diffuser. Again, to reiterate I didn’t want the flash to be obvious in this picture, instead I wanted it to just give a little glint, to highlight the eye, which it did. What I liked about back lighting the sheep with the low sun is the wonderful warm glow given to their outlines.

The sheep then headed down the side of the hill to continue their grazing.

I decided to use the Velvia film simulation for much of the morning as it really gave a punchy finish to the photos, though sometimes the contrast was a little too high so I would sometimes change it to Provia.

Though the more I compare the above images, the more I lean towards the Velvia image as it is so attention grabbing. It is great having the options at your finger tips and being able to change the look of the image so easily and I haven’t even mentioned Classic Chrome yet!

As it was slippy under foot, I was very happy to have had the 18-135mm attached to the camera, as it gave me the versatility required to adapt to where I could move to and where the sheep moved! The first shot below was taken at 36.6mm, while the image after was at 135mm.

As the sun rose and the intensity of the colour faded I started using Classic Chrome more, to yet again change the look and feel of the pictures.

Though the sheep were seemingly trying to hide on occasion..

Using a longer focal length reduced the angle of view, which was helpful for this example as it gives focus on the sheep and the snow covered hill behind.

Though freezing conditions (literally), the gear performed flawlessly, even if the batteries suffered a little due to the cold. Certainly something to consider if spending a long time in cold conditions, having multiple batteries will save you from frustration.

Leaving the sheep to graze, I decided to test out the i40 flash in another filler situation. Using the 10-24mm and a tripod I set up the exposure compensation to capture the surrounding area how I wanted it to look and then adjusted the TTL function on the i40 to fill in the shaded area of the rocks.

To change up my photos again I decided to use the same techniques as discussed in the previous Story behind the photo blog, using filters for long exposures. On the other side of the adjacent valley was a factory/power station of some description and it looked like it could look pretty cool if slowed down. This was a 28 second exposure.

What do you think to the photos? I hope it shows that the adaptability of the Fujifilm X-Series. Any questions please leave a comment below.

Until next time, go out, shoot and share your results with us!