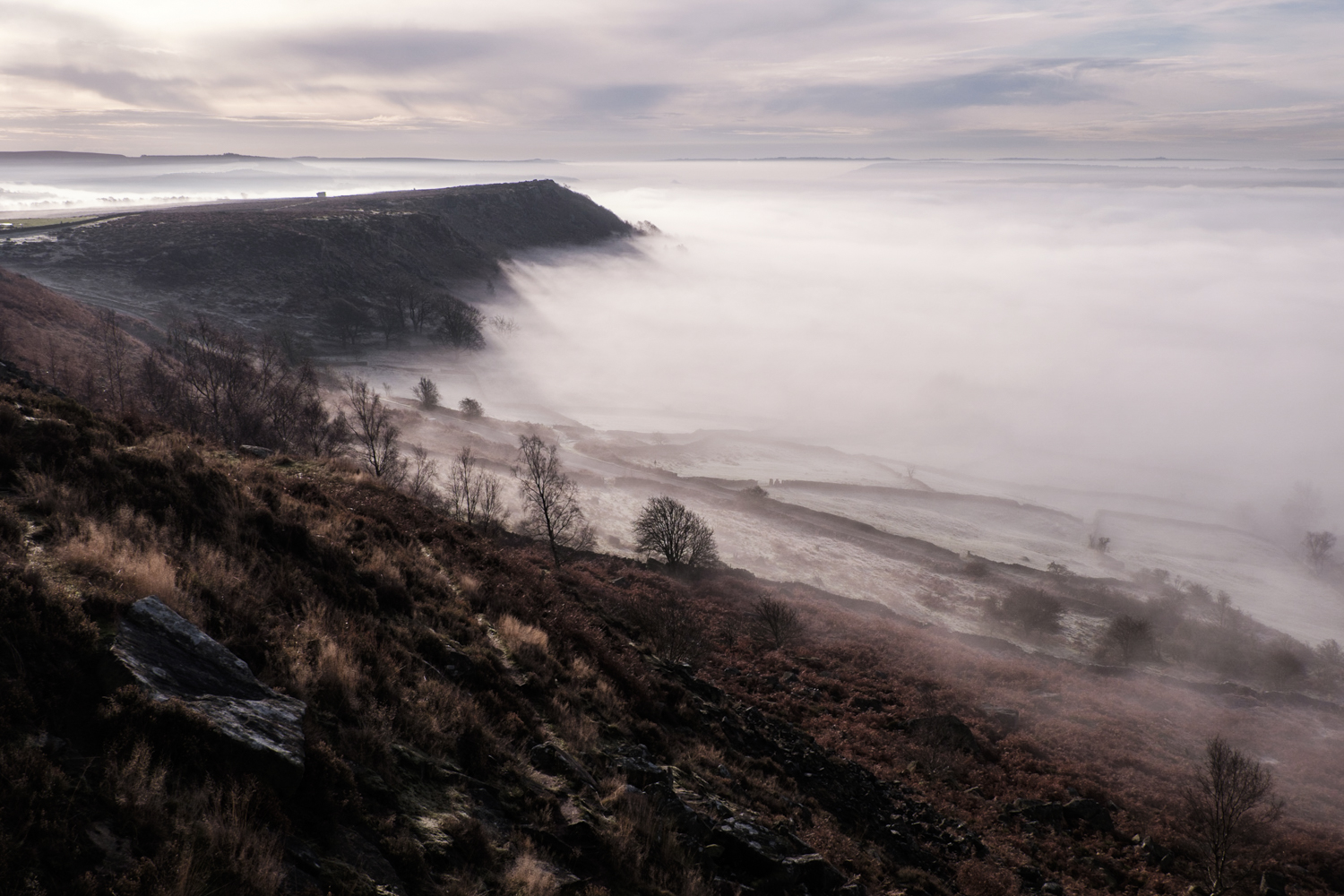 As winter starts to set in, photographers are looking for ways to capture this cold season. For me, winter is best covered in the morning. This is a personal preference but in the mornings you have frost, a reasonable hour for sunrise and (if you’re lucky) fog or mist.

There are three types of fog,  so you need to decide what you are looking for and this will depend on your location:

When trying to photograph fog you need to use the weather forecast to understand what the evening will be like in your desired location. I was fortunate enough to visit Curbar Edge in the Peak District the afternoon before my first morning I was there to scout the location. It was just before sunset and the fog was forming in the valley below and at that point I decided to try it out the following morning to see how it would look.

The weather for my first morning at Curbar was drizzling and there was a thick layer of cloud, which meant it was pretty unlikely I’d witness much golden light, I thought I’d set out and give it a go. I am so happy I did! This was my first real experience of photographing mist and it is incredible how quickly the spectacle evolves in front of your eyes. I one point I was photographing down one end of the valley, taking some long exposures, only to look over my shoulder and see that it had dramatically changed down the other end of the valley!

I used the X-T1 and the XF18-135mm lens for my main set up. As it was a wet morning the weather-sealed kit meant that I could stop worrying about the system and focus on the spectacle. As well as offering weather sealing, the XF18-135mm meant that I had great versatility, meaning that I didn’t have to worry about changing lenses the entire time. However, I also ended up using a neutral density filter to reduce the amount of light reaching the sensor to further extend the shutter speed. This was great but because I was using a filter set instead of screw in filters it meant that the front element was exposed to the conditions. Long exposures and rain drops do not mix! Thankfully a little umbrella tucked away in my bag helped to shelter the filter.

Generally I was not bothered about using a fast/moderate shutter speed so I set up the system on a tripod and used ISO 200 (the lowest RAW compatible ISO) and generally around F8. The addition of the ND filter, which was a 10-stop filter, meant that the shutter speed required was dramatically decreased. This results in the mist smoothing out, giving quite an interesting effect. See the comparisons below (note that despite the fact the ND filter is meant to be neutral it has put a distinct colour cast on the images).

The ND filter extended the shutter speed so much that I had to use the bulb setting, as the required shutter speed was longer than 30 seconds. For this I used the remote trigger that allowed me to hold down the trigger (lockable) to keep the shutter open for as long as required. The X-T1 shows the length of the shutter speed on the back screen, this is very helpful. There is something to consider thought when using long exposures: the processing time. As soon as you go beyond 30 seconds, the processing time dramatically increases from seconds into minutes, this isn’t a problem but is something to be aware of when trying to photograph a scene that is evolving constantly.

To make sure I didn’t miss any moments while the X-T1 was processing and to get some different shots, I used the X100s with ISO 1600 to produce a fast enough shutter speed to allow me to use the camera one handed. Picture the scene: a wonderful valley filled with fog unfolding in front of me, one camera on a tripod; my left hand sheltering it with an umbrella; photographing the scene with the X100s in my right hand at the same time! Who says photographers can’t look cool…

The three above photos were taken with the X100s using the monochrome + red filter jpeg preset.

The reason I chose Curbar Edge is because it provides a high vantage point. This is really important to optimise your chances for good mist photography. It generally means that you should be hit by the early morning light and so should warm up faster! This is a valid point to consider on crisp winter mornings, not that it happened this time around. A high vantage point allows you to see for a greater distance, hopefully providing you with a greater number of layers to your picture. At the top of a valley, Curbar Edge allowed me to see for miles along the valley, which offered both valley fog and river smoke. The ability to then use a telephoto lens to zoom in on particular areas can result in some quite striking shots.

But also having the ability to instantly zoom wide was a great asset to try and obtain a variety of photographs.

Though on this occasion the sun didn’t break through the thick cloud cover, the spectacle was nevertheless remarkable and I can only imagine what it would have looked like if sun rays had broken through.

Despite being very happy with the previous morning I decided to give it another go as the forecast suggested there was a better chance of a proper sunrise. This time round I decided to not focus too much on lengthy shutter speeds, but instead the details in the fog. What I didn’t expect was the amount of fog!

The range of the 18-135mm meant that I could capture the grand scale of the fog at 18mm, with the car in the first of these pictures giving a sense of scale. Then using the longer end of the lens I pulled out particular parts of the landscape, such as the little cottage that looks like it should be in Harry Potter and the hilltops surrounded by a sea of fog, turning them into islands. As well as the incredible amount of fog, the sun did make a bit of an appearance too. Despite this it was a very cold morning, producing a wonderful frost. I was very happy to have packed a hat and pair of gloves.

I positioned myself so part of the hilltop was between me and the rising sun, creating a backlighting effect on Curbar Edge, which brings the fog alive.

Because of the brighter sky this time round I needed to use a ND gradual filter, where unlike the filter I used during the first morning, this one changes from one end to the other, as the name suggests. At one end it is darker (you can buy filters at different stops, depending on how dark you want to make part of the image), while at the other it has no effect on the light. I use these when I am photographing something with a sky that is much brighter than the ground below. With the above image I used a filter which didn’t stop down the light enough to correctly expose the sky but I like it nevertheless because of the frost (it get particularly difficult to expose correctly when the sun is in the image). While the picture below is a slightly better example of a ND gradual filter in use.

I hope this has proved helpful and now it is your turn to get out there and photograph the wintery conditions. Let us know how you get on.