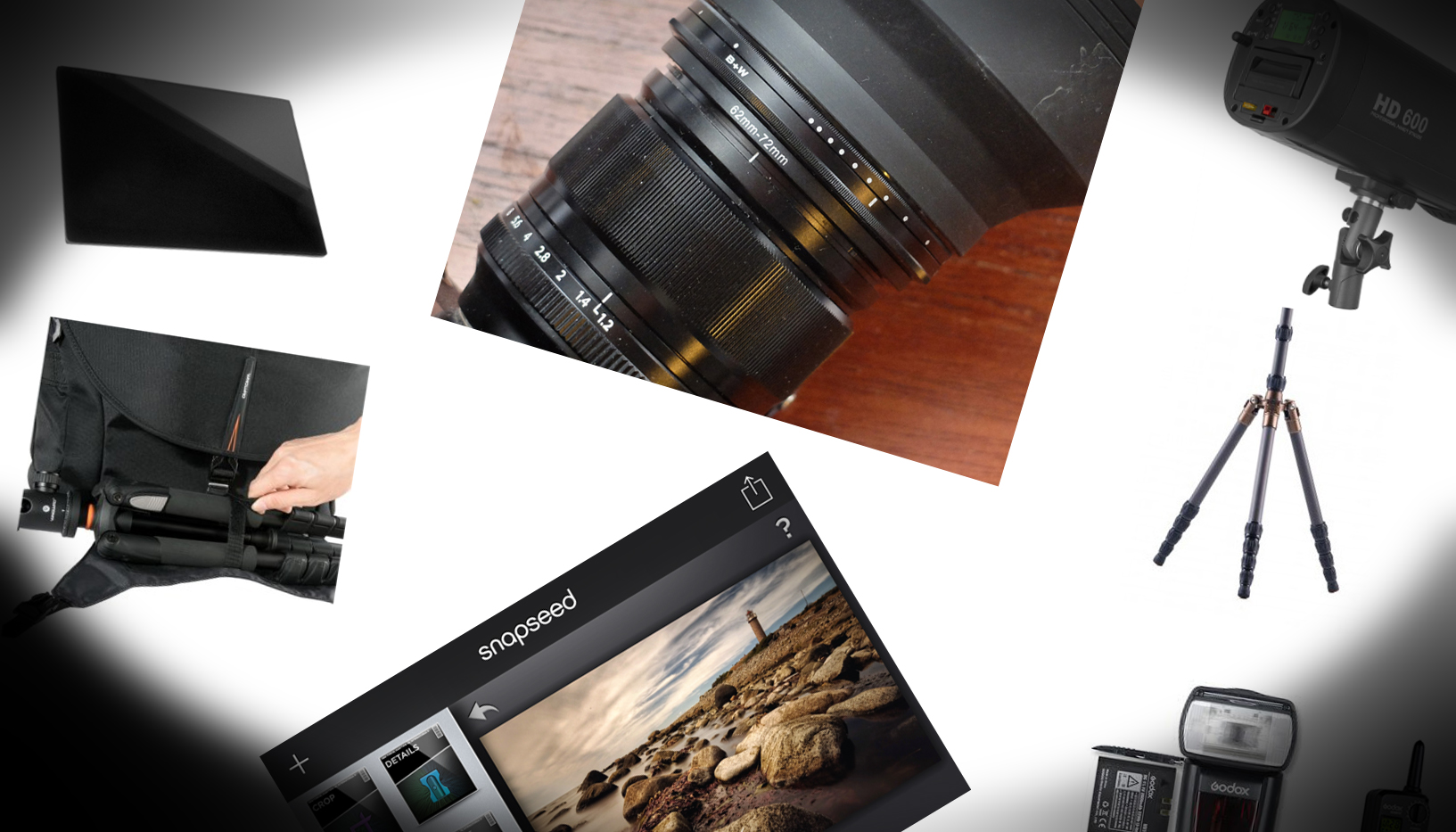 For my travel photography, I now work entirely with the X-system. I like the fact that it’s lighter, smaller and manages to look great yet unobtrusive and produce great looking images at the same time. I love the direct feedback of the manual controls, dials and aperture rings. I use two X-T1’s, a X100s and a slew of Fujifilm lenses. One of the advantages of using a smaller and lighter system is that it frees up some space (and weight) in your camera bag for other accessories that can help you create better shots. In this two-part series, I’ll have a look at my top-ten favorite accessories for Fujifilm cameras – from a travelling point of view. You can read Part 1 by clicking here. Here are my final 6 – 10 accessories.

Much has been written about how good or bad Lightroom is for Developing Fujifilm .RAF files. I have to admit that at first, it was really bad but in my opinion, although probably not the best, Lightroom is good enough for my needs. Whatever 10 percent that Lightoom might lack in terms of pure image quality, it makes up for by its workflow advantages and the fact that I can go from capture to export and even publish websites and create printed photo books all from within the same application.

Lightroom is more than a raw converter: it’s an image database and it even allows you to quickly publish your images, be it to a printer, the internet or in a photo book.

On top of that, I don’t want to change my workflow every time a new, supposedly even better raw converter is the ‘buzz du jour’ on the internet. I do find that I have to use higher than default capture sharpening but that’s easily fixed by setting a new camera raw default. I teach you how to do that (and much much more) in my 300+ page Lightroom 5 Unmasked eBook.

On some occasions like studio shoots or when I’m doing demos, I would like to have the images show up on my monitor or projector. However, up until now, my X-T1 does not allow me to shoot tethered into Lightroom, nor to any other app, for that matter. I could use the Camera Remote software but that would be cumbersome because I would have to transfer each photo individually from my camera to my phone or tablet and then on to my computer. There’s a great workaround, though and it involves using an Eyefi Mobi card. That’s an SD card that has a built-in WIFI transmitter. It saves the images to the card but also – by means of the Eyefi Mobi desktop App that you install on your Mac or Windows machine, to a folder of your choosing on your computer. You can then set up that folder as a so-called Watched Folder in Lightroom and have the images that the Eyefi card wirelessly pushes to your computer, show up there (the full lowdown is also discussed in Lightroom 5 Unmasked). The only limitation is that, at least for the European Eyefi cards, you can only transfer JPG files. So, does this mean that if you start editing those JPGs and then at the end of the day you import your raws from the SD card itself, you have to start all over again?

Well, not necessarily, because you could use John Beardsworth’s Syncomatic Lightroom plug-in: this cool plug-in allows you to automatically copy the edits you made to a JPG and then apply those edits to the raw files that have, bar the extension, the same name. Just make sure that you set the raw files up with the same Film Simulation (you can do that in the Camera Calibration menu) that you assigned to the JPGs in the camera.

Anytime you’re on a tripod and you’re using longer shutter speeds, it’s best not to physically depress the shutter button to make a photograph: doing so can introduce blur in your image. If your Fuji has WIFI, you can use the Camera Remote App. If it doesn’t, or if you want to work with exposures over 30 seconds (the limit for the Camera Remote App), a dedicated remote might be a good idea. On my X-T1, I use this model. It’s actually designed for Canon, but it also works with some Fujis like the X-T1. On top of enabling shutter speeds beyond 30 seconds, it allows you to program interval shooting and delays beyond the default choices of 2 or 10 seconds.

The Really Right Stuff L Bracket allows you to quickly mount the camera horizontally AND vertically on a tripod.

The Vertical Grip for the Fuji X-T1

This is an accessory which I haven’t used myself yet, but a couple of fellow Fuji shooters such as Matt Brandon use it to their satisfaction and therefore bumped it high on my wishlist: the Really Right Stuff L Bracket. This bracket allows you to quickly mount your camera either horizontally or vertically to your tripod. The L Bracket is designed in a way that it can stay on your camera and you still get to access the battery door and card slot. Some photographers like it just because it adds some extra bulk and grip to the camera. Although, if that’s all you want, you might just spring for Fujifilm’s own vertical grip for the X-T1, which has the added benefit of storing an extra battery.

I’ve saved the best for last. Really. I’ve started giving out instant prints to the people I photographed along my journeys as early as 2009. At the time, I used a Polaroid Pogo. Handing out prints allowed me to not only take a photo but give something back in return. And by doing it on the spot rather than on my return back home, it saved me the trouble of trying to decrypt hastily written addresses or trying to remember which photo I should send to which person. But what I hadn’t expected at first, was that handing out prints to people was also the perfect door-opener to photograph… even more people. More than once have I had the experience that someone did not want to have their photo taken, only to ask me to take their photo just minutes later after they had seen me give a print to someone else.

The Pogo did have its disadvantages, though: the battery lasted for only 10 shots and color fidelity was clearly not high on the specs list. So for a moment I dabbled with the idea of bringing a Fujifilm Instax camera, but then Fujifilm announced the Instax Share SP-1 Printer. If you get only one of the accessories that I have listed in this overview, make it that little printer. Especially in remote areas where people don’t have ready access to photography, you’ll spread joy with every Instax print you hand out. And, as a sign of good Karma, you’ll be rewarded with more great photo opportunities, too. And you don’t have to take my word for it: check out the praise of Matt Brandon or Zack Arias in their reviews of the SP-1.

I’d like to wrap up this overview with the smallest, lightest and cheapest accessory of them all: a pack of Sugru. Sugru is self-setting rubber and if I’m not mistaking, it’s invented in the UK. You open a small sachet, tear of as much as you need (the rest will dry out, unfortunately), you model it into shape, affix it to wherever you need to and then let it dry for 24 hours and it adheses perfectly to the surface you stuck it on. Now what do Sugru and my X-T1 have in common… Well, as much as I love that camera, there’s one thing I like less than on my old X-E2: apparently because of weather sealing, the 4 way control buttons around the central Menu/OK button are too flush with the rest of the camera, at least to my taste.

Now I love the fact that there are 49 AF points on the Fuji cameras and that – contrary to DSLRs – they are literally everywhere across the image. Howver, my right thumb often has trouble finding the buttons without taking my eye of the EVF (tip-within-the-tip: all these buttons are programmable, so I’ve programmed them all to change the AF-field). I used Sugru to raise the profile of the buttons just enough so that I can find them, even in the dark. It’s a small mod but it makes a gigantic difference in my workflow.

Piet Van den Eynde is a Belgian freelance travel photographer, author and trainer. He’s a Fujifilm Ambassador and has published over 10 books and eBooks on digital photography and postprocessing with Adobe Lightroom. He also organizes two travel photo workshops each year in India with X-Photographer Matt Brandon from www.thedigitaltrekker.com. Next one up is the beautiful Indian state of Rajasthan and has only two spots left. His English eBooks such as his bestselling Lightroom 5 Unmasked are published by Craft & Vision. Discount code FUJISAVINGS will save you 30% on any of his Craft & Vision eBooks and his Photoshop for Photographers video training until end of February 2015. Piet’s own blog can be found here: http://www.morethanwords.be/blog