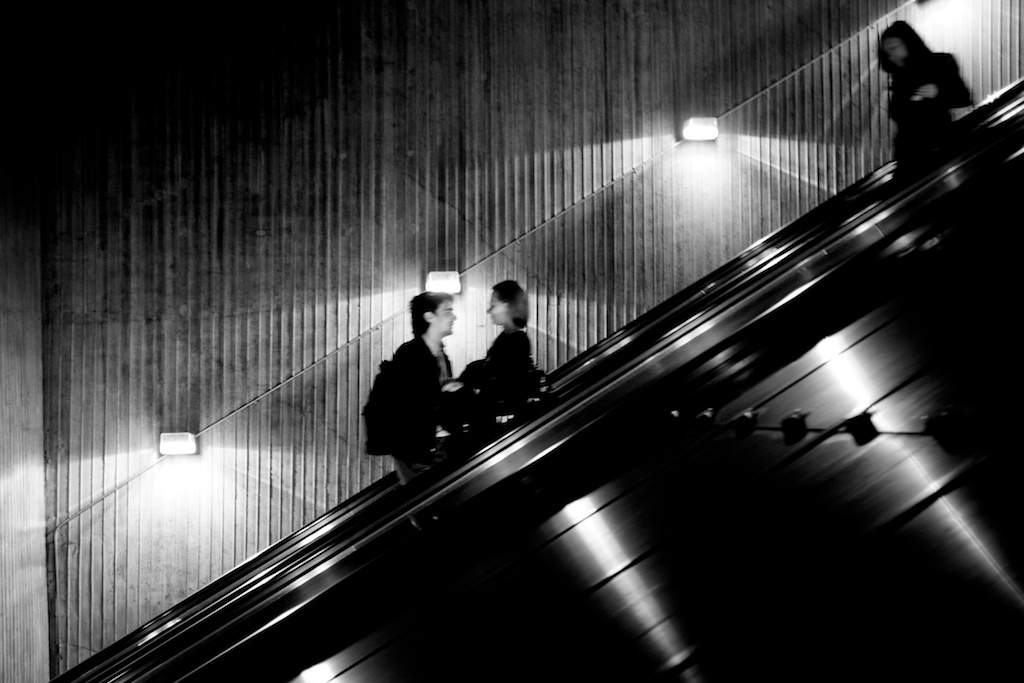 Philip Ewing has been an enthusiastic amateur photographer since his 35mm days on the university student newspaper. Today he works as a journalist in Washington, D.C. You can find more photos at
http://metrocommutr.tumblr.com/

Photographers love to insist the camera doesn’t matter – our creative vision is what truly makes a picture, as the old bromide goes – but inside the family, we know a camera can make a huge difference.

When I decided to make a serious go at a photo project documenting my daily life on Washington, D.C.’s Metro underground system, I did not begin with a clear sense for what the images should be. Sometimes you can imagine a photo beforehand and getting it is just a matter of execution. Sometimes you sense there’s a picture out there … you almost smell it … but you don’t know exactly what it is or how to capture it. This was one of those.

So starting last year, I began taking a camera with me every day on trips to work and around town. There were — and are — many more failures than successes. Plus my DSLR, along with the fast prime lenses I needed for dimly lit subterranean stations, was killing my back and shoulders. The files from my compact point-and-shoot didn’t have the detail or depth I wanted. Fortunately, there was a huge wave of anticipation about the then-new X100S, and I got on board. It has turned out to be an investment that has paid many unexpected dividends by enabling me to create pictures I didn’t know were there until the moment they presented themselves.

The unobtrusive little camera is light enough to carry all day, so you’ll actually take it with you, but it doesn’t force you to sacrifice sharp optics or a good sensor. It’s effectively silent, preserving your discretion in quiet train cars where an SLR shutter sounds like a gunshot. True, the X100S has a few quirks and faults and it isn’t the only tool I use to capture images. But the X100S is the one I carry 90 percent of the time, and it more than any other has helped translate the “sense” of a picture into an actual image.

As it turned out, the other keys to the Metro project were the two most basic things in photography: People and light. If any of the pictures have been successful, it has been because good light hit an interesting person at just the right time. The trick was figuring out those places and moments and just being there to try to catch them.

When a woman in a big woolen scarf emerged from a field of silhouettes as she stepped into a sunlit escalator — click. When a sunbeam inside a train car made a circuit over the passengers as we went around a bend, I set the camera to underexpose the scene and make a certain rider pop against the shadows. Dialing up 1/60th, f/2.8 and ISO 1250 with the Velvia film simulation mode can make the harsh-lit interior of a train car into a miniature stage for our human comedy.

There’s another aspect of using the X100S that has taken me by surprise: Its effect on others. Strangers stop you to ask about it — “It’s been years since I’ve seen somebody out using an old film camera!” they say. Once, I was photographing outside a Metro station and a D.C. police officer walked over. My heart began to race as I silently rehearsed a speech about my rights to take pictures in a public place. But there was no summons that day. “Hey,” he asked — “what kind of camera is that?”